Where do you get your scary ideas?

Given what it stands next to on Tim Montgomerie's bio, I assume the Centre for Social Justice is nothing of the sort. pic.twitter.com/DkHw2XVAAc

The Centre for Social Justice is where Iain Duncan Smith gets his scary ideas about welfare reform. IDS created CSJ in 2004, after he was sacked from leading the Tory party because he paid his wife £18,000 out of Parliamentary Staffing Allowance.

Of course the big question to be asked of every think-tank is: who’s paying you to generate these reports and ideas? Often, we just don’t know. The Centre for Social Justice gets a transparency rating of “D” at Who Funds You?, the Political Innovation project for promoting open, transparent think-tanks. 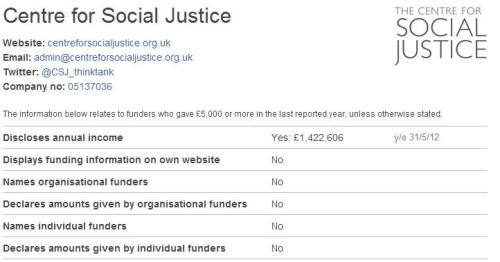 In 2007, the CSJ published a report, Breakthrough Britain, which, the Telegraph reported at the time, included these proposals about “Unemployment and welfare dependency”:

Almost 3.5 million people live on benefits which place virtually no expectations on them that they need to find a job.
About six out of 10 people on Jobseekers’ Allowance are repeat claimants, while youth unemployment is higher now than when Labour came to power in 1997.
The report calls for a number of radical reforms, including a new expectation that lone parents should be actively looking for part-time work when their youngest child is five and a full-time job by the time they are 11.
Disabled people and those with social conditions will also be expected to work for a minimum of either five or 20 hours a week, depending on their condition.
People who claim the Jobseekers’ Allowance will have to show that they are “fully engaged” in finding a job. This would include undertaking intensive skills training and regular meetings with a personal adviser.

We all know where these ideas led.

To which Rowan Williams, former Archbishop of Canterbury, Master of Magdalene College, and patron of Cambridge City Foodbank, said:

“It is not political point-scoring to say that these are the realities of life in Britain today for a shockingly large number of ordinary people – not scroungers, not idlers – but men and women desperate to keep afloat and to look after their children or their elderly relatives.
“The real scaremongering is the attempt to deny the seriousness of the situation by – in effect – accusing those seeking to help of dishonesty as to their motivation.”
Dr Williams, the Master of Magdalene College, added: “I would urge the Secretary of State to visit any Food Bank he chooses and to listen to the accounts of what is actually happening.
“It may not change his policies but it might at least persuade him not to attack the motives of hard-pressed volunteers and generous donors.”

The reality of people who need food banks:

A few weeks back we had a lady in who was living with her teenage daughter, working three part-time jobs, and she just couldn’t afford to buy food once everything else was paid for. We’ve had people say they can’t afford the gas or electric, so we try to put in extra tins of fruit for them, food they can eat cold. One man told me he’d borrowed a camping stove from his next door neighbour because he couldn’t afford the energy meters.

There was a definite increase in demand in April, when benefit changes came in, then again in the school summer holidays – we fed as many people in those eight weeks as we had in the first five months of the year. You realise how much families rely on free school lunches.

The CSJ is now working on Part II of Breakthrough Britain:

a follow-up project that is anticipated will have a huge influence on all three main political parties in the run-up to the next General Election.

Breakthrough Britain II will revisit the five ‘pathways’ as well as looking at the voluntary sector and the role it plays in tackling poverty.

We can be fairly sure that Iain Duncan Smith’s thinktank is not going to tell IDS anything he doesn’t want to hear. But David Cameron is looking forward to BBII:

“I look forward to the excellent work I know that the CSJ is going to do to shine a light into some of the deep and dark places in our society where we really need to improve – whether that is getting people out of prison and turning their lives around, whether it’s dealing with failing schools or pupil referral units, whether it’s dealing with some of the problems of drugs and debt, addiction and worklessness, which still plague our country, but where the CSJ has such an important role to play.”

The “important role” is, of course, proposing a solution that is acceptable to the Tory/LibDem government.

At the Treasury select committee hearing on 12th December:

While refusing to “put a number on it” (such as the IFS forecast that £12bn of welfare cuts or tax rises will be required to keep cuts at their current pace), [George Osborne] said that he wanted “billions” more cut from the welfare budget.

It’s easy and tempting to mock George Osborne as Gideon, the rich kid whose highest qualification to be Chancellor is quite literally a Maths O-level. But:

It’s very easy and very tempting to completely dismiss someone whose beliefs or practices you find odious, unethical, or preposterous. But most of the time, you don’t get to be rich and famous if you’re actually a fool. You get to be rich and famous by figuring out how to prey on people who desperately want to believe what you’re selling without seeming to them to be preying on them.

And that’s very much Osborne – for most of the people who’ll vote Tory in 2015. The first Breakthrough Britain report told us what the Tories planned to do to us if they got into office in 2010, which, thanks to the LibDems, they did. The second will tell us what they plan to do next time. Iain Duncan Smith may still be around to be their useful idiot, as Nick Cohen called him: the quiet man with no idea of what he’s talking about.

3 responses to “Where do you get your scary ideas?”