It’s possible, of course, that Cameron refused because he knows he isn’t a feminist. Not only is he known for telling the Shadow Chief Secretary of the Treasury in the House of Commons to “calm down, dear” (six times), his government has since 2010 imposed austerity cuts that place a disproportionate burden on women.
END_OF_DOCUMENT_TOKEN_TO_BE_REPLACED

But when three current Labour politicians – former officers of National Council for Civil Liberties – are confronted with documented links to something that really was called the Paedophile Information Exchange, and when it is set down in black and white that this group really did agitate for all of the aforementioned ‘progressive’ policies, you have to wonder why Ed Miliband has not at least instigated an internal inquiry and done a few background checks on Harriet Harman, Jack Dromey and (former MP) Patricia Hewitt. Instead, he declared that he doesn’t “set any store by these allegations”, and that Harriet Harman in particular is a person of “huge decency and integrity”.

The evidence (if it be) has been set out in the Daily Mail, even alleging that “the Labour government of the time may have helped finance the organisation”.

END_OF_DOCUMENT_TOKEN_TO_BE_REPLACED

Filed under Children, In The Media, Justice

Don’t Link To The Mail 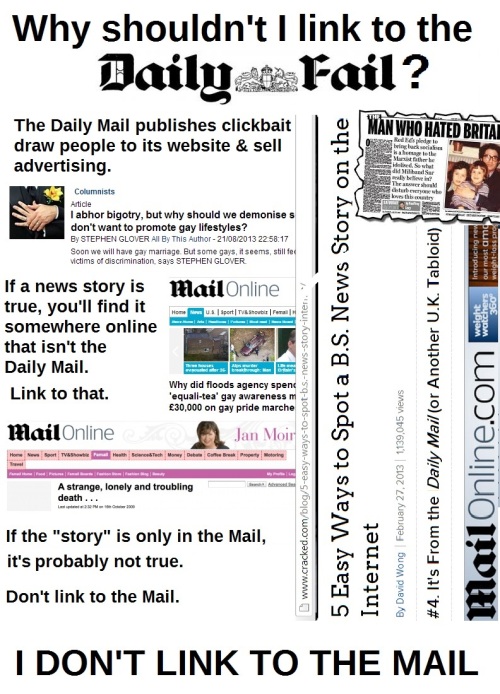 You may ask – why the Mail specifically?

Because in my view, the Mail is the worst of the British media for simply inventing stories when it suits them: for turning their Mail Online website to make a huge profit for the owner.

Don't link to the #DailyMail pic.twitter.com/POdymyQpfv

RT if you agree!

Filed under In The Media

The population of the UK is about 63 million, and fewer than 5% of the population are Muslim. (In Scotland, 1.4%.) Muslims are slightly more likely to express pride in being British than non-Muslims; are more likely to want to live in diverse, mixed neighbourhoods: and much more likely to identify themselves with Britain. (From a recent study carried out by the University of Essex.)

Muslims are not a majority religion in the UK, and mosques are more likely to be firebombed than churches. The most powerful and dangerous country in the world, whose religious extremism has caused more deaths than any other nation’s, has Christian conservatism at the heart of power, not Islam. The right-wing domestic terrorists of the EDL and SDL march against Islam: the BNP occasionally takes up pickets outside KFCs that provide halal chicken: we see a BBC Question Time panel debate veiled Muslim nurses for 20 minutes without ever asking themselves or the audience “has it ever happened that a nurse wanted to wear hijab on a ward”? Right-wing men go on rants claiming it’s a big feminist deal how Muslim women dress. (It is.) An anti-Islamic pressure group masquerading as a “student rights” organisation is funded by a neocon thinktank. And heavyweights like the Daily Mail and the Telegraph run media campaigns trying to convince people that it’s a very big deal if a shop assistant who prefers not to deal with wine or pork, has her religious preferences met with flexibility by her employer. Right-wingers who wouldn’t support LGBT rights or feminism against any Christian institution get all worked up over the hazards of “Islamic extremism” to women and to gay people.

When you have a right-wing political movement trying to blame all the ills of the country on “immigration”, and presenting a persecuted minority as if they were a huge danger, what does this look like to you?

Because I know what it looks like to me.

Filed under In The Media, Racism, Religion

Jack Monroe reacted by pointing out the multiple things that Littlejohn had got wrong:

I’ve read your trash non-journalism ‘comment’ piece about me in the Daily Mail this morning – not because it is a newspaper I read, but because a friend forwarded it to me.

Firstly, I have to commend you for managing to get 20 facts completely wrong in a comparatively short article. But that’s your style isn’t it – never let the truth get in the way of a good smear campaign, or something like that.

This morning, if you search Twitter for “Richard Littlejohn”, @MsJackMonroe is the first listing – Richard Littlejohn himself comes in third. But the Daily Mail and Richard Littlejohn will doubtless see traffic go up from all the people linking to his column: and they don’t care whether it’s negative or positive linkage, because the profits for the MailOnline website are the same in either case.
END_OF_DOCUMENT_TOKEN_TO_BE_REPLACED

Filed under About Food, In The Media, Poverty

Someone must leak the letter Paul Dacre wrote the Guardian demanding a column….

“Out in the real world, it was a pretty serious week for news. The US was on the brink of budget default, a British court heard how for two years social workers failed to detect the mummified body of a four-year-old starved to death by his mother, and it was claimed that the then Labour health secretary had covered up unnecessary deaths in a NHS hospital six months before the election.”

“Eh bien, mon prince, so Genoa and Lucca are now merely estates, the private estates of the Buonaparte family. Non, I warn you, if you don’t say this means war, if you still defend all these vile acts, all these atrocities by an Antichrist (for I really do believe he is the Antichrist), then I no longer know you, you are no longer mon ami, you are no longer, as you put it, my devoted slave. But, anyway, how do you do, how are you? I see I am frightening you, do come and sit down and tell me what’s going on.”

Of course Paul Dacre forgot to mention that this claim about cover-ups was made by Jeremy Hunt, the Conservative health secretary, on Twitter: and that on being contacted by lawyers pointing out that this was libellous, Jeremy Hunt had to write to the Labour health secretary acknowledging that the claim wasn’t true.

That’s a perfect example of a Daily Mail political story in minature. Correct enough not to be legally actionable, but actually completely misleading.
END_OF_DOCUMENT_TOKEN_TO_BE_REPLACED

Filed under In The Media, Politics 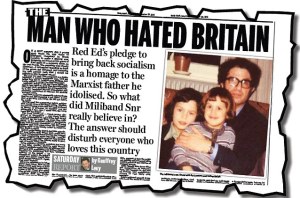 The second, that it had been published purely to traduce a dead man because he was the father of the current Labour party leader Ed Miliband, was so clear that even the usual supporters of Daily Mail politics found themselves choking on it: of the entire Conservative cabinet, only Michael Gove – who used to work for Rupert Murdoch at the Times and whose wife writes for Paul Dacre at the Daily Mail – defended the Mail: every other Conservative minister from David Cameron downward admitted that if that had been his father, subjected to Daily Mail attack after his death, they’d… well… they wouldn’t have been happy about it. Contemptuously, the Mail – and all the Mail employees, from Paul Dacre downward – have refused to apologise, claiming they were entirely justified in their smears of Ralph Miliband.
END_OF_DOCUMENT_TOKEN_TO_BE_REPLACED