Today, I watched Doctor Who and I was amused, moved, and enthralled. I was watching An Adventure In Space And Time. (Available on BBC iPlayer til New Year’s Day.)

And then I watched the Doctor Who Christmas Day episode.

The basic story was simple:

The Doctor lands on a world where there’s a crack in the universe and a town called Christmas. (It’s the Christmas episode.)

The TARDIS takes off again with Clara and doesn’t come back for three hundred years, thus allowing Matt Smith’s baby Doctor to grow old fighting his enemies, who keep attacking the tiny town of Christmas.

Part of the Doctor's canon is now 300 years stuck in Christmastown because the TARDIS was late? #goodgrief #DoctorWho

(There is no doubt that the voiceover narration would have been better if written by Tim Burton and performed by Christopher Lee. But it wasn’t.)

When the TARDIS comes back, the Doctor infodumps to Clara that as “number 10” regenerated twice (q.v. the Stolen Earth) he’s the 12th regeneration, not the 11th, which means he cannot regenerate again and will die finally when this body dies. He takes Clara back to Earth and dumps her in the worst Christmas dinner ever, with a TARDIS-roasted turkey, emblematic of the episode itself.

Then he comes back again and collects her and she pleads with the Time Lords at the crack in the universe for them to allow the Doctor to regenerate again and he does. Into Peter Capaldi.

As a plot, this was probably the first fifteen minutes of a good episode. Unfortunately, it was stretched out over sixty minutes, and the remaining forty-five minutes were filled with foamed polystyrene packing kernels.

Steven Moffat seems to be overcome with how Iconic Doctor Who is: to think that an episode will overwhelm people if he throws in lots of Doctor Who material – a Cyberman head, Daleks, Sontarans – a reference to reversing the polarity – that by itself will overwhelm viewers, and he doesn’t have to bother about good scripts, character development, or – above all – a plot. 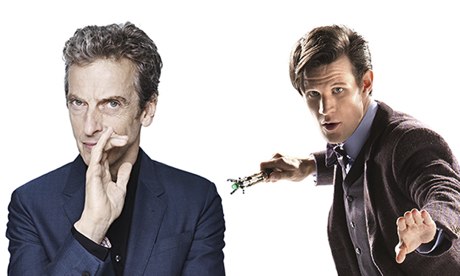 Time Lords, if you can grant regenerations, bring back Verity Lambert. Please. #DoctorWho