This other thing that is happening in Scottish politics: the referendum. In the US, where they have referendums whenever they can get enough voters to sign off on one, they went through a phase of holding referenda in which voters were invited to agree that “marriage is between a man and a woman”, which was then held to mean that marriage between a man and a man, or a man and a woman, was unlawful. In the UK we referend much more rarely, and only – so cynics say – when the government thinks they can get the public to vote the way they want.
END_OF_DOCUMENT_TOKEN_TO_BE_REPLACED

Elaine Smith MSP, deputy presiding officer in the Scottish Parliament, argued for polygamy in her written evidence to the Equal Opportunities Committee last year, as the Scotland on Sunday anti-gay marriage story this morning quotes:

“Whilst the government has said that it has no intention of allowing polygamous marriages as part of this legislation which changes the essential nature of marriage, it has not explained in any detail and with research analysis its reasons for taking that position.

“Further, if the government is sincere about its support for ‘equal love’ then it appears to have a contradiction on its hands.”

There is “no logical reason” for discriminating against more than two people getting married if the redefinition of marriage is driven by love, Ms Smith adds.

END_OF_DOCUMENT_TOKEN_TO_BE_REPLACED 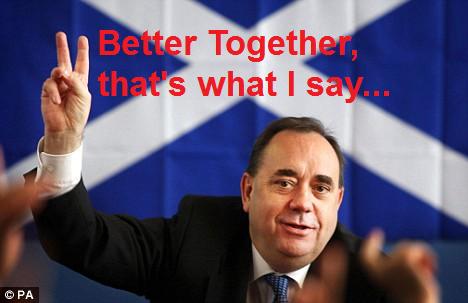 I still don’t know how I’ll vote in autumn 2014. But a few days ago, one thing at least was made definite for me: the Better Together vote is going to win. I’m certain enough of that to lay a bet on it, if I were the gambling sort.

What made me so sure?

It’s not just that the SNP are saying blithely that Independence Day will be March 2016, though that is a highly-unrealistic timescale. (It’s also not a binding decision.)

On 11th May I predicted, correctly, that Barack Obama was going to be a two-term President. My certainty was founded in Obama’s own sense of political security: that’s when Obama opted to come out for repealing DOMA and in support of lifting the ban on same-sex marriage recognition: for gay marriage.

For the most part, there are two sorts of politicians who come out for LGBT equality: the very principled, who will stand up for what’s right regardless of what this does to their future career, and the very confident, who are sure of their future career regardless of what they say. Barack Obama is not the first sort of politician (that sort doesn’t become President of the United States) but he is superb at the job of getting elected. I was sure Obama was going to win.

I’m now sure that the SNP leadership is certain they won’t win the referendum in 2014: they can set a date of March 2016 for independence because that’s not in their plans. They can separate off the “Yes Scotland” campaign as officially not-really SNP, and the morning after the votes are counted and the result is published, the SNP can move on with their plans for contesting Scottish seats in the May 2015 Westminster election.
END_OF_DOCUMENT_TOKEN_TO_BE_REPLACED

This year the Archbishop of Westminster, the leader of the Catholics in England and Wales, took the opportunity of his bully pulpit on Christmas Eve to tell his congregation that God hates LGBT people and does not want us to have equal civil rights. Peace and goodwill to all is so outdated: modern Christians are expected to hate as directed.

told worshippers that the Government has no mandate for the change and had not followed the proper rules of British democracy.

“There was no announcement in any party manifesto, no Green Paper, no statement in the Queen’s Speech. And yet here we are on the verge of primary legislation,” he said.

In an apparent reference to the totalitarian state described in the novel 1984, he added:

“From a democratic point-of-view, it’s a shambles. George Orwell would be proud of that manoeuvre, I think the process is shambolic.”

Nichols told lots of lies about the lack of public support for equal marriage, but his key objection is – he claims – that in England & Wales, this was not done properly. END_OF_DOCUMENT_TOKEN_TO_BE_REPLACED

Gandalf for the Firth

This is a bit of a story, so have patience.

Kreetch is a fan of The Hobbit: as am I. Due to her shift-patterns, it was impossible for us to go any earlier that Sunday 23rd December, so I booked two seats in the Dominion Cinema, Gold 1 (because she’s worth it) for the 3.20pm showing.

The Dominion is described as “Edinburgh’s most unique and luxurious cinema”. Gold 1 isn’t quite as snazzy as Gold 4, but you get utterly comfy seats in a gorgeous building in Newbattle Terrace that’ll remind you of what cinemas used to be like before they went multiscreen and boxy. (Facebook has some photos.)
END_OF_DOCUMENT_TOKEN_TO_BE_REPLACED

Cristina Odone’s week: how many ways can you be smugly disapproving about religion, marriage, and gays being religious and wanting to be married if you try with both hands?

Cristina Odone on Monday, how appalling it would be if gay people thought they could be married just like us!:

I resent the way Cameron is ready to bulldoze over Tory and religious objections on this issue. It’s clear from his arrogant stance that the PM believes soon, even this bunch of hypocrites will embrace the Gospel according to Dave. They – Tories who live out in the sticks and not in fashionable metropolitan areas; people of faith who hold onto their traditional religious values – will experience a Damascene conversion to the PM’s way.

That’s Monday, with a side-order of I love my gay friends but they shouldn’t want to be my equals. (Why do homophobic bigots always claim to have gay “friends”?)

Cristina Odone on Tuesday, Christianity is great! not liberal at all!:

But I can’t help think – we’re not doing so badly after all. That, after a decade of Dawkinism, paedophile scandals and metropolitan secularism, the majority (59 per cent) of Britons should still cling to their faith strikes me as nothing short of miraculous. And that’s before the backlash to the atheists – it’s bound to happen – properly gets off the ground. If, after all the vicious kicks they’ve suffered from the liberal establishment, and their none-too-inspiring leadership, the Christian Churches in this country are still in existence, we who care about faith should celebrate.

Cristina Odone is a Christian. Christians aren’t liberal. Christians get kicked by liberals, and Christian leadership is none-too-inspiring. Muslims are all right, though. That’s Tuesday.
END_OF_DOCUMENT_TOKEN_TO_BE_REPLACED

Once again, the Christian right is trying to kick up a fuss over nothing. Reverend Andrew Fothergil (Church of Scotland, Strichen and Tyrie Parish Church, Aberdeenshire) said:

“My personal position is that I think naturally, we have as celebrants, some concerns about the assurances that have been given by the Scottish Government about the safeguards it intends to put in place to protect celebrants who would hold a different position from what the future government legislation might become. I think many of us are a bit nervous about what protection it can actually offer.”

Reverend Fothergil has evidently not read the Church of Scotland’s admirably clear guide to people who want to have their marriage ceremony performed by a Church of Scotland Minister. That’s a shame, because it would calm him down from being “a bit nervous”.

Of the Frequently Asked Questions, the first one is: Q. Can anyone be married in a Church of Scotland church? The answer is:

The Church of Scotland is ‘national’, in that every district has its parish church. The parish minister is willing to discuss conducting marriage for any member of the parish. If you are not a church member, the minister will want to discuss with you whether a religious ceremony is what you are looking for, whether it will have meaning for you, and whether he or she agrees it is appropriate in your situation.