The Tory/LibDem policy of destroying the NHS has been sweeping along since 2010, to the financial benefit of Tory donors.

This is really just one more step, but it’s a big one.

The prolife Conservative party instituted charges for maternal health care for “immigrants and tourists” in 2011. With the obvious results:

The researchers heard the case of a woman who needed a caesarean for medical reasons, but who gave birth at home because she could not afford the charges. The midwives and overseas visitors officers told the charity that some women were not going to their antenatal appointments and were instead turning up in labour with severe complications.
END_OF_DOCUMENT_TOKEN_TO_BE_REPLACED

One of these things is not like the others? After all, Thatcher’s sole political merit was that she was pro-choice. Let me explain.

Ding Dong the Wicked Old Witch is a jolly song. As Angry Women of Liverpool note in their feminist analysis of how to discuss Thatcher’s death “there are so few songs you can sing joyfully about the death of somebody thoroughly deserving”:

Tough one. The history of witch persecution is fraught with the very foundations of modern capitalist and patriarchal oppression, as anybody who’s read Silvia Federici knows. But there are so few songs you can sing joyfully about the death of somebody thoroughly deserving.
You want a proper argument in defence? Give me a minute. END_OF_DOCUMENT_TOKEN_TO_BE_REPLACED

A few years ago, when I was on holiday in Belgium, I spent hours in churches. (The friend I travelled with, who hadn’t voluntarily been in a church in decades, and who knew I am an atheist, was worried I would catch Christianity.) What I wanted to see was the paintings. The invention of oil paint meant Lowlands painters could create pictures so finely detailed it is possible to see the weave in the carpet and the stitches in the embroidered clothing: pictures from five or six hundred years ago that glow from the canvas.

And over and over again, pictures of Mary. Mary as a baby, with Anna her mother: Anna and Joachim, Mary’s father, together: Mary saying “Fiat” to the angel: Mary as a young woman, as a mother with a preposterously large infant on her knee, Mary being carried into heaven by a troop of angels on her death. Mary is supposed to have been conceived on 8th December, and on that date in 2009, The US Senate rejected by a narrow margin an amendment proposed by Senators Ben Nelson, D-Nebraska, and Orrin Hatch, R-Utah, that was intended to modify “Obamacare” so that any private insurance company that got federal funding for Obamacare insurance, couldn’t offer health insurance plans that included abortion.
END_OF_DOCUMENT_TOKEN_TO_BE_REPLACED

Women Under Siege is an independent initiative documenting how rape and other forms of sexualized violence are used as tools in genocide and conflict throughout the 20th century and into the 21st. 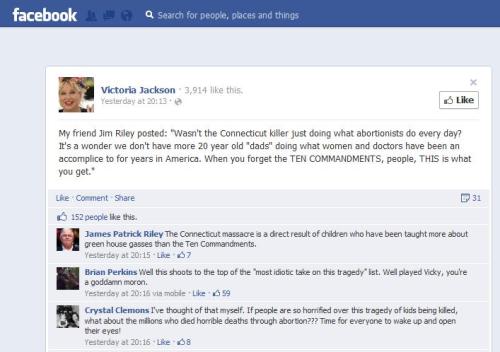 Mother Jones – A Guide to Mass Shootings in America:

Since 1982, there have been at least 62 mass murders* carried out with firearms across the country, with the killings unfolding in 30 states from Massachusetts to Hawaii. … Just under half of the cases involved school or workplace shootings (11 and 19, respectively); the other 31 cases took place in locations including shopping malls, restaurants, government buildings, and military bases. Forty three of the killers were white males. Only one of them was a woman.

END_OF_DOCUMENT_TOKEN_TO_BE_REPLACED

As far as I can see, there are two prolife trends in response to Savita Halappanavar’s death in hospital, denied an abortion.

One reaction is to argue that she would have died anyway, so an abortion wasn’t necessary as it never is no matter what.

For example, SPUC dehumanises Savita as the foetus’s “protection” and argues that the hospital were right not to perform an abortion:

“It is not ethical to induce delivery of an unborn child if there is no prospect of the child surviving outside the womb. At 17 weeks’ pregnancy Mrs Halappanavar’s child was clearly not viable outside the womb, as there is no scientific evidence that unborn children are capable of surviving outside the womb at such a young age. Rather than removing the protection of the womb from unborn children, the ethical response to emergency situations in pregnancy is medical treatment of the mother for the conditions causing the emergency. In the case of infection, this is usually timely administration of antibiotics. It is also not ethical to end the life of an unborn child, via induction or any other means, where the child is terminally-ill.”

The other is to argue that there was medical incompetence because of course she could have received “all necessary medical treatment” to save her life: the familiar prolife distinction that makes some abortions, in their mind, not really abortions.

(Meantime, the prochoice majority is simply outraged. But that’s the human response.)

It is worth noting that had Savita Halappanavar got an abortion on 21st October and been home in time to celebrate Diwali with her husband, if similar publicity had been given to her getting an abortion in an Irish hospital as has been given to her death as a result of being denied an abortion, we would now be seeing from both sets of prolifers a universal outcry against her having been “allowed” to have an abortion: and any Catholics who performed or who assisted in her abortion would be excommunicated.
END_OF_DOCUMENT_TOKEN_TO_BE_REPLACED

“The number of children that you have is a choice and what we’re saying is that if people are living on benefits, then they make choices but they also have to have responsibility for those choices,” Hunt said on Wednesday’s Newsnight. “It’s not going to be the role of the state to finance those choices.”
END_OF_DOCUMENT_TOKEN_TO_BE_REPLACED

Which member of the Privy Council is best qualified to be Chancellor of the Exchequer? It is not, obviously, George Osborne, who famously doesn’t even have O-grade maths and who is driving the UK into double-dip recession because he has no notion about economics beyond “tax cuts for the rich=GOOD”.

Oddly enough in a Tory Cabinet, it’s actually a comprehensive-school kid from Wales.

Maria Lewis went to Brynteg Comprehensive School/Ysgol Gyfun Brynteg in Bridgend and took a BSc in Economics at the LSE. (When she married Iain Miller in 1990 she took his surname and has stood for election as Maria Miller ever since.) She isn’t a crony of Cameron from the Bullingdon Club (they don’t let girls in), she didn’t go to Oxbridge, she wasn’t privately educated, and she didn’t marry into the web of privilege: she will never be one of the Secret Seven. I imagine as a member of the Conservative Party since she was 19 she’s got used to that kind of thing.

Maria Miller has been MP for Basingstoke since 2005. As she was born in 1964 she’ll be aware that to David Cameron (born 1966), she has a useful life only to 2018, even if the Tories scrape a win in 2015: Caroline Spelman was sacked in the reshuffle for being too old at 54.
END_OF_DOCUMENT_TOKEN_TO_BE_REPLACED