Reeva Steenkamp’s death is not a bet

Just over a year ago – on 14th February 2013 – Oscar Pistorius fired shots through his bathroom door, which struck and killed Reeva Steenkamp.

Outside South Africa, most news stories focus on Oscar Pistorius: Reeva Steenkamp is generally referenced as “his girlfriend”.

Steenkamp was not famous outside of South Africa: the world’s media will be descending on the North Gauteng courthouse because of Pistorius’s fame. END_OF_DOCUMENT_TOKEN_TO_BE_REPLACED 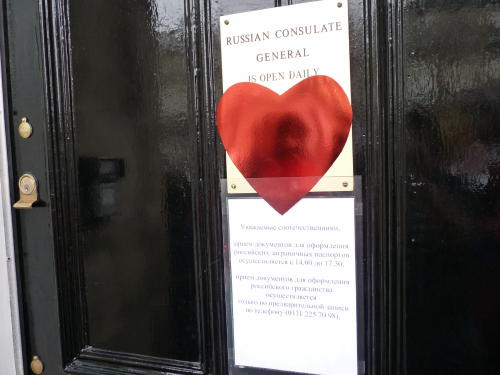 I celebrated Valentine’s Day this year outside the Russian consulate, 58 Melville Street, Edinburgh.

The new cafe on Ferry Road, Coffee and Cream, was having a sale on, so with malice aforethought I selected the largest, cheesiest Valentine’s Card to be delivered to the consulate for Vladimir Putin, and a couple of packs of red shiny hearts and a roll of hearts on crepe paper. 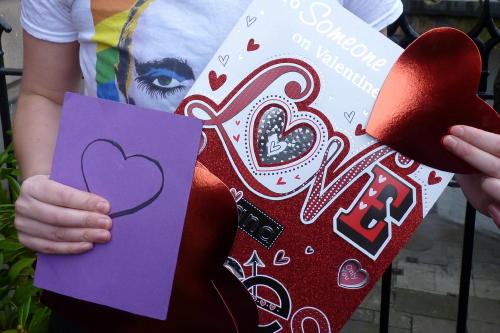 Spoke to the two fine representatives of Police Scotland who were lurking on the corner pretending they hadn’t read the Facebook event, and assured them we wouldn’t be blocking the pavement or doing anything else that the police might feel they had to do something about. (On some previous demos outside the consulate, we’ve been instructed not to approach the door, but not this time.) 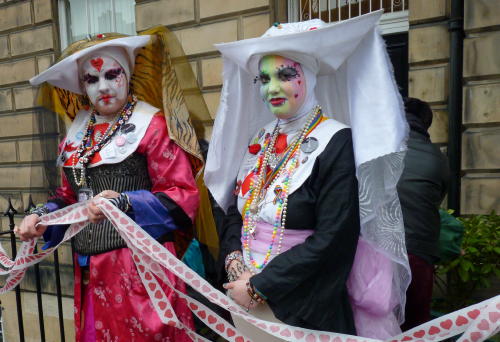 And met some friends. The nuns are two Sisters of the Order of Perpetual Indulgence, Convent of Dunn Eideann.

Vladimir Putin is, quite cynically, demonising the LGBT community in Russia in order to strengthen his position as President. The official Russian line is that any claim that LGBT people are being persecuted is slander – they claim “gingers” are treated as badly in the UK as LGBT people in Russia.

No, says Putin. Gay people are welcome in Russia. Just stay away from children.
END_OF_DOCUMENT_TOKEN_TO_BE_REPLACED

How has welfare-to-work become big business?

Today, JobCentre staff who are members of PCS are on strike “over oppressive working conditions and unrealistic targets.”

“Some customers may say they intend to self-harm or kill themselves as a threat or a tactic to ‘persuade’, others will mean it. It is very hard to distinguish between the two … For this reason, all declarations must be taken seriously.” (DWP guidance, April 2011)

April, 2011: a whistleblower at the Department of Works and Pensions admits:

“Suddenly you’re not helping somebody into sustainable employment, which is what you’re employed to do,” he said. “You’re looking for ways to trick your customers into ‘not looking for work’. You come up with many ways. I’ve seen dyslexic customers given written job searches, and when they don’t produce them – what a surprise – they’re sanctioned. The only target that anyone seems to care about is stopping people’s money.

END_OF_DOCUMENT_TOKEN_TO_BE_REPLACED

After Aidan “Nazi stag party” Burley had to sit through “the most leftie opening ceremony I have ever seen”, he tweeted:

Thank God the athletes have arrived! Now we can move on from leftie multi-cultural crap. Bring back red arrows, Shakespeare and the Stones!

This evening at the Olympics stadium the three British gold medallists were a picture of the British multiculturalism that Aidan Burley and the Daily Mail had decried. Published on the Mail Online only a few hours after the Opening Ceremony came to an end, Rick Dewsbury wrote:

“This was supposed to be a representation of modern life in England but it is likely to be a challenge for the organisers to find an educated white middle-aged mother and black father living together with a happy family in such a set-up.
END_OF_DOCUMENT_TOKEN_TO_BE_REPLACED

END_OF_DOCUMENT_TOKEN_TO_BE_REPLACED

Article 22: Everyone, as a member of society, has the right to social security and is entitled to realization, through national effort and international co-operation and in accordance with the organization and resources of each State, of the economic, social and cultural rights indispensable for his dignity and the free development of his personality.

I have the Opening Ceremony, Isles of Wonder, open in the corner of my screen at this moment – the industrialists have just arrived on Glastonbury Tor, and Isambard Kingdom Brunel is about to speak Caliban’s speech from The Tempest. Thanks to BBC iPlayer and the licence fee, I can watch any part of it I wish, from now til 12th January 2013. And I would never have thought that this would actually be something I would want to do.

My expectations of the London Olympics’ opening ceremony were so low that, I suppose, I would have been impressed if it had featured Boris as Boudicca, driving a chariot over the prostate figures of the Locog committee. (Actually, now that I think about it, that would have been fairly entertaining.)

I haven’t changed my mind about the Olympics or Dow Chemical, but Isles of Wonder is a magnificent piece of performance art. The whole Olympic ceremony impressed and delighted me – to say “beyond expectations” is meiosis: I had sat down to watch it in a negative mood about the Olympics, cross about the money, and fully expecting to spend Friday evening making bread, doing laundry, only a quarter of my attention on the TV.

Ms Mongrel wrote in Bring me my chariot of fire:

Despite my cynicism, I do want things to go well. I want the Olympics to be a success for example, and I was really pleased at the spectacle of the Opening Ceremony. END_OF_DOCUMENT_TOKEN_TO_BE_REPLACED

Danny Boyle did great. So did all the volunteers who took part. Literally the best thing Seb Coe did for the London Olympics was ask Danny Boyle to plan the opening ceremony and give him a free creative hand.

I saw a tweet just after Michael Fish and the non-hurricane warning appeared saying to the effect that most Olympic opening ceremonies try to impress the world. This ceremony wasn’t meant for the rest of the world: it was meant for us.

(Kes. I saw Kes. And Frankie Says Relax. I remember when the BBC banned that.)

[Update, 30th July: Apparently it was so British-orientated that NBC cut the tribute to the 7/7 dead and had no idea who Tim Berners-Lee is.]

It was all really, peculiarly, brilliantly British. As if Danny Boyle had thought: we are all feeling staggeringly horrible about this, for very excellent reasons: let me do a show that will remind us of our mutual shared Britishness, before the athletic teams march. Of course that cheap Nazi knock-off Aidan Burley hated it. 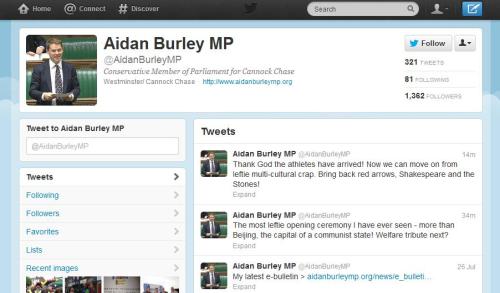