Neither cure nor endure

Back when we first evolved into naked apes, skin tone for human beings was normally high in melanin. Low-melanin skin (“white”) is a genetic freak that may have provided some advantage for living in latitudes where there’s little sunshine for a large part of the year – or it may have happened by accident, a group of freaks moving northward.

In 2010 I was selected to be one of the first black faces for a Marks & Spencer campaign. Many people in the industry questioned my motives. Being a musician and never having previously modelled, I was constantly asked “Why Marks & Spencer?” Only now can I fully understand the driving force that led me into the modelling world.

I began modelling because I was that young girl looking into the magazines and wondering why I didn’t see more faces like mine looking back at me. Whatever tiny impact it made, I wanted to empower the young black women around me, to feel liberated at the inclusion of a black female in a high-profile British campaign.

After messages from young black women poured in once the campaign began, as well as feeling unbelievably humbled, my exasperation with the fashion industry felt validated.

A few days earlier, in Get The Gloss, Ayesha Muttucumaru wrote about the “casual racism of the beauty industry” that teaches dark skin as a blemish to be “cured”:

The skin whitening market is big business there, a multi-million pound industry that is continuing to grow at a rapid pace. In my motherland of Sri Lanka, adverts promoting fairness as the beauty ideal are a far too familiar sight on the local and Indian television channels with a bevy of beauty brands clambering left, right and centre to secure a place on the lucrative ‘lighter is lovelier’ bandwagon. Pond’s and Hindustan Unilever sparked outrage in 2008 when they released a soap-opera inspired series of fairness cream adverts where viewers were forced to wait with baited breath to see if a young woman’s true love took her back. Only once she’d used a lightening cream, of course. Not only that, but it starred top Bollywood actors Priyanka Chopra, Ali Khan and Neha Dhupia.

You cannot cure a person of having dark skin. Most of the non-prescription creams sold that pretend to do so are hazardous to use. Why would you even want to try?

When I worked at the University of Exeter, every colleague who embarked on any step in the great journey of heterosexuality had it promptly marked with a general email from the administration about babies, engagements, weddings and so on. After my civil partnership, I had to ask a junior colleague to send a note round, and forever afterwards one administrator used to say “Your partner – oh, you like to call him ‘your husband’, don’t you?” with a poisonous smile, as if it were a harmless eccentricity of my own that she might as well indulge.

Even to mention it seems petty; no legal sanction will touch, or ought to touch it. There’s no law on earth to compel work colleagues to invite their gay team member out for a drink on Friday night, or to congratulate them on their marriage without making quotation marks in the air. Probably a generation or more will pass before such dismissive stereotypes stop being used in the most unlikely circumstances – once, I was discussing the marking of an MA thesis with a colleague at Exeter when another sailed past saying: “I can’t think what you two queens are bitching about.”

Who wants to be treated as inferior? If there’s an upgrade to get you nearer to the lowest difficulty setting in the game of life, why not take it?

Recently, the Telegraph and the Spectator blasted the idea of gender segregation at universities: an issue, Glosswitch noted, that they seemed to be coming to late and prompted more by racism than revulsion at sexism:

I look back on my own university days in the 1990s and I remember astonishing amounts of cultural separation between men and women. They weren’t officially sanctioned by Universities UK, but they still existed. Women were belittled when they spoke up in seminars. Women were mocked for their body shape and clothing when they entered the ‘male’ space of the college bar. Posters advertising events around campus always showed scantily clad women, no matter the event, just to make sure we all knew who the ‘real’ students were. We didn’t campaign because this was normality. We didn’t think it was changing the way we understood ourselves, the way we learned and the opportunities we felt were available to us. But it was.

A few weeks ago, a new student group at Galway University started putting up posters around campus advertising the ex-gay group “Courage”, which is described as “the Catholic version of Exodus International”, founded in New York and a member of the ex-gay network PATH since 2003. Like all ex-gay groups – like the horrid practice of selling skin-whiteners – the principle of “Courage” is that there is something wrong with your natural self and it needs to be fixed.

The natural target market for selling “reparative therapy” isn’t to LGBT people themselves, but to the parents of teenagers or even younger children. The fraudulent practice of promising a conversion therapy to make gay people straight will, if all goes well, soon be legally banned in the UK. But although ex-gay groups often provide a medicalised front, the practice is founded in religion and gender stereotyping as surely as gender segregation is:

It is an expression of theocratic patriarchy that a free society leaves alone in the home and the place of worship – as long as the law is observed – but cannot possibly countenance in the public square.

Yet when NUI Galway’s ex-gay society was been disbanded by the university (a group launched that term under the aegis of Legion of Mary, whose headquarters in Dublin deny any knowledge, and who had failed to provide the university with a statement of their aims and values) the Telegraph headlined this as Catholic counselling for gay students? Banned!

No such thing, of course: students – gay or straight – who want Catholic counselling will have the same access to it as they ever did. But, theocratic patriarchy that sends a message of discrimination is not appropriate for any university, or anywhere in the public square rather than the religious sphere. 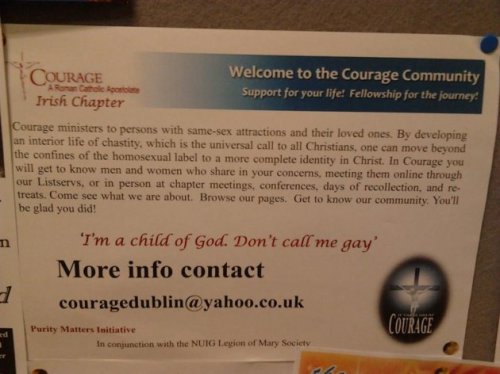 4 responses to “Neither cure nor endure”