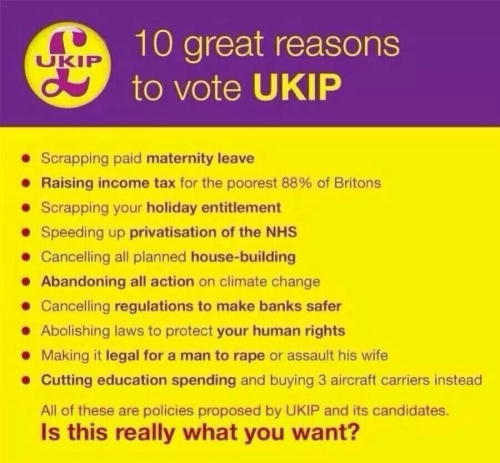 There’s a poster that’s been live on the Internet for a while. UKIP don’t like it, obviously, but apparently one UKIP politician likes it so little that he actually tried to get the police to have it taken down.

I was quite doubtful about this blog when I first read it, because it seemed so improbable that any politician would do anything so damaging to his own party.

[Update: But apparently that Cambridgeshire UKIP councillor is not the only UKIP representative to think the police’s job is to stifle criticism of their party: Ukip’s South East chairman Janice Atkinson and her fellow candidates Patricia Culligan and Alan Stevens have written to the police this week demanding they arrest any protester who calls them “fascists”.]

Yesterday afternoon as I was debating whether to continue watching some lame James Caan movie about midget submarines, I was disturbed by a police officer peering through my lounge window. I do live on the ground floor, so not as surprising as you may have imagined. I went to the door and there were two constables there. The first thing they said was that there was nothing to be worried about, they just wanted to come in for a chat. Not something that has ever happened to me before, but I showed them in and sat them on the sofa.

They wondered if I was the Michael Abberton on Twitter and I said yes. Then they said this was in relation to a complaint that had been made by a certain political party in relation to tweets I had published about them and one tweet in particular which talked about ten reasons to vote for them. The PC wanted to know if I had made that poster. I explained that I hadn’t but it had been doing the rounds on Twitter for a while, and so I had decided to see if these claims could be verified.

Now, it is a long-standing tradition in UK political campaigns that you are allowed wide latitude to say what you like when campaigning. You are not allowed to say things about a political candidate that you know to be untrue in order to cost that candidate votes, but you are allowed to say that he’s a self-serving millionaire ex-banker career politician out to exploit people’s fears and raking off huge sums in European Parliamentary expenses. Not least, because all of that is verifiable. (Steve Bell nails it, as usual.)

this was in relation to a complaint that had been made by a certain political party in relation to tweets I had published about them and one tweet in particular which talked about ten reasons to vote for them. The PC wanted to know if I had made that poster. I explained that I hadn’t but it had been doing the rounds on Twitter for a while, and so I had decided to see if these claims could be verified.

The police explained that I hadn’t broken any law – there was no charge to answer and it really wasn’t a police matter.

They asked me to ‘take it down’ but I said I couldn’t do that as it had already been retweeted and appropriated, copied, many times and I no longer had any control of it (I had to explain to one of the officers what Twitter was and how it worked).

As the police were quite clear to Abberton – if not to the UKIP councillor – in tweeting that poster, he had not broken the law in any way. Just because you are campaigning, however, wouldn’t make it right to send personal abuse on Twitter, such as UKIP supporters sent to Charlie Bloom after he confronted Nigel Farage on Question Time last week.

But, there is no indication that Michael Abberton, the blogger who tweeted this poster “10 Reasons” about UKIP’s policies, was sending personal abuse to anyone: a Cambridgeshire UKIP councillor just objected to his political tweeting and rang the police to tell them to do something.

“A Ukip councillor came across a tweet which he took exception to. The name of the person on the tweet was identified and that individual was spoken to. We looked at this for offences and there was nothing we could actually identify that required police intervention. Clearly, the councillor was unhappy about the tweets. If every political person was unhappy about what somebody else said about their views, we would have no politics.”

Leaves the question open: why did the police pay a visit? If there was nothing that required police intervention, why wasn’t the UKIP councillor told that? And which councillor was it?

Was it Peter Ashcroft, Paul Bullen, Simon Bywater, Paul Clapp, Daniel Divine, Gordon Gillick, Roger Henson, Alan Lay, Peter Reeve, Sandra Rylance, or Michael Tew? Which of them didn’t like this poster or the blogger who was tweeting it so much that they had the police sent round? And why did the police go?

[Peter Ashcroft has since contacted me to say that it wasn’t him who was in touch was the police and that “True UKIP” supports free speech. He also asked me to remove this entire post, but that I will not do: I take his word for it that he was not the UKIP councillor who contacted the police.]

Update: The chief constable for Cambridgeshire police, Simon Parr, has admitted the police should not have become involved: he has asked for an internal review into the incident.

“I believe in this instance police attendance was not required and I have asked for our approach to this sort of incident to be reviewed to ensure we do not get involved unless there is clear evidence that an offence may have been committed.”

I’d like to be absolutely clear – the police officers were extremely professional and polite and I couldn’t fault their behaviour in any way. But it wasn’t until after they left that I questioned why they had visited me in the first place. A complaint had been made but with no legal basis. Not a police matter. So why did they come to my home in the middle of a Saturday afternoon? Also, seeing as my profile doesn’t have my location – how did they know my address, or even the town I live in?

About fifteen minutes after they left I received a threatening tweet from a party member I had had an exchange with earlier in the day. Though appearing to be no more than a party supporter, he seemed to know that the police had been involved. I copied the tweet and sent it to the police.

In closer-to-home news, David Coburn, London businessman, who was selected by Nigel Farage to be the UKIP candidate for Scotland in the Euro elections, is claiming to have moved to Edinburgh. When asked on Twitter when he moved to Edinburgh (he was UKIP’s London Regional Chair for many years), he refused to answer except by tweeting poll results from the end of April.

Voting counts: and we can all hope that on 23rd May, David Coburn catches a plane back to London, rather than joining his team in Brussels.

As for the UKIP Cambridgeshire politician who wanted to silence the claims made in that anti-UKIP poster: have you heard of the Streisand effect?

10 Great Reasons to vote #UKIP. I don't know who made it – so I referenced it from official #UKIP websites pic.twitter.com/GXnikZ3Blg

Allegedly, Roger Helmer tried to take a megaphone off a protester yesterday, if it was me I'd have shoved it where the sun don't shine

19 responses to “UKIP: Against free speech”