Last night the political reporter for the Nottingham Post tweeted:

The Bus Pass Elvis party is in the great British tradition of Screaming Lord Sutch. And they polled more votes than the LibDems. 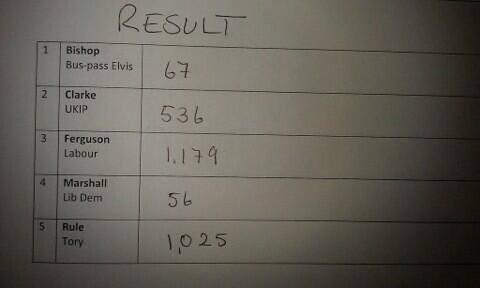 The snap analysis of this result – Labour beating Tories by 156 votes, with 536 votes going to UKIP and the LibDems nowhere – is that if UKIP hadn’t split the right-wing vote, the Tories would have taken the seat.

But in the 2011 council elections, Labour took the seat that time, too – and, just like in 2014, Labour beat the Tory candidate then by a small margin. That margin has grown bigger, but not proportional to the UKIP votes.

We saw last night on BBC Question Time a man in the audience railing against immigrants who were, in his mind, the reason why he couldn’t get a job and was homeless. (He then got up and walked out.) That is the thinking that feeds UKIP and the BNP. Press Action noted in 2010 that the press, local and national, is largely to blame for feeding this thinking by demonising immigrants and asylum seekers:

Unfortunately the stories that sell papers often tend to be those that are sensational and pander to existing prejudices, rather than those that take a broader, more complex view. In the current political climate of demonisation of migrants from poorer countries, stories that pin the blame for society’s ills on these people have become popular. They give the exploited, but more firmly settled, working class someone to blame for their own misfortunes. They give the bosses and managers a way of distracting workers’ attention away from the inequalities of society.
Extreme cases of this scapegoating can be seen in some of the national tabloids, like the Express and the Nottingham Post’s owner, the Daily Mail, which continually rail against mythical floods of immigrants who are posed to dispossess each British citizen of public services and jobs. But the only reason these stories are believed is because of the drip drip effect of thousands of other stories, written in less inflammatory language, but having the same effect – increasing suspicion of all things ‘foreign’.
The Nottingham Post does not normally play the same explicitly anti-immigrant role as its parent paper, but it does normalise suspicion of immigrants with a constant barrage of police and UK Borders Agency (UKBA) stories about immigrant crimes, often served up with sensationalist headlines.

It seems entirely possible that people who would not have voted, are voting UKIP, because this convinces them they are voting for a party that represents them or at least is against the other “pro-immigration” parties. But the evidence of Clifton North is that this kind of protest voting doesn’t seem to affect the end result: Clifton North was a hold for the Labour Party, by a slightly increased margin. And electoral calculus still says that the vastly most probable result after the general election in 2015 is a Labour majority.

The deadly temptation for both Tories and Labour is to scoop up some of that new UKIP vote by being anti-Europe / anti-immigrant. (For the LibDems, at least, the temptation is to take UKIP seriously…) The Daily Mail and its sub-papers will encourage that.

But that way lies only a spiral downwards into the abyss. Let’s not go there. Please.

One response to “UKIP: gamechanger?”