Parliament is sovereign: Vote on article 50 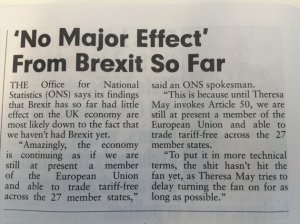 Why I think you should contact your MP to ask them to vote against Theresa May’s Article 50 bill – whether your MP is pro or anti Brexit.

Theresa May claimed as Crown Prerogative the right to invoke Article 50 and take the UK out of the EU without consulting Parliament.

The Supreme Court has ruled, as matter of constitutional law, that she’s wrong: Parliament is sovereign, and only Parliament can take the UK out of the EU.

So Theresa May has had written a very short bill which will by Parliamentary vote give her the right to invoke Article 50 without further consultation.

This is the full text of the bill Theresa May has published today, two days after the Supreme Court ruled she couldn’t just use her Crown prerogatives to invoke Article 50:

Confer power on the Prime Minister to notify, under Article 50(2) of the Treaty on European Union, the United Kingdom’s intention to withdraw from the EU.
END_OF_DOCUMENT_TOKEN_TO_BE_REPLACED

The NHS is not a pie

If we were Americans this would be Pi Day. As we are British and write our dates in the proper order, Pi Day is on 22nd July: 22/7, which is more accurate anyway by a fraction of 1/3047. That matters if you have a big pie, and the NHS is a very, very big pie.

Lord Owen, the leading opponent of the NHS Bill in the House of Lords will attempt one last deed to slow the passage of this NHS Bill. He has introduced an amendment (here) into the House of Lords that the entire NHS Bill be paused until the NHS Risk Register is published. This is because Lord Owen is fearful that the risks contained within the report are so grave that they should be considered and debated first, before the bill proceeds. We need you to contact the Lib Dem peers and ask them to support Lord Owen’s amendment.

The vote will take place on Monday. There’s a gadget at the Green Benches to auto-email all of the LibDem peers, but I really prefer WriteToThem because that site monitors which peers respond to what you wrote – and also by default sends the message by fax, which means that your letter arrives at their office on paper (unless they are set up to handle emails and have told mySociety to have people email them). Paper letters are treated more seriously than emails, especially when emails are sent in large numbers with the same wording.

How many Lords can I write to?

Quite a few, but don’t try and write to loads. You see, they’ve only got this one fax machine, and we don’t want to overwhelm it. The Parliament website gives more details about different ways to contact Lords, and the different limits on sending bulk messages to all Lords.

We also very aggressively prevent copy-and-pasted messages to Lords. This is because the House of Lords throw away bulk sent faxes, so it is a waste of time. Do not tell people to copy and paste letters to Lords, get them to write in their own words. See our Guidelines for campaigning for more information on this.

So there you go. If you have further updates about the *’d peers, let me know.]

I have been following the progress of the Health and Social Care Bill through Parliament with great concern.

Although I live in Scotland, where the NHS will not be subject to the “reforms” of this Bill, it seems to me that such a radical breakdown of the NHS is bound to affect the whole of the UK – and will certainly have knock-on effects for Scots (and Welsh) travelling or temporarily staying in England.
END_OF_DOCUMENT_TOKEN_TO_BE_REPLACED