Gravity is “just a theory”, like evolution, you know.

Peter Higgs is Professor Emeritus of the school of physics and astronomy at the University of Edinburgh. In 1964 he wrote a paper in which he proposed a new particle which explained a missing part of the Standard Model of physics: the Higgs Boson. (A paper he wrote which presents the history of his idea for physicists: My Life As a Boson.)

Peter MacDonald interviewed him for the BBC in February this year:

First, here’s the problem: take an object – say Isaac Newton’s apocryphal apple. Here on Earth, it weighs something. But even if you put the apple in the weightlessness of space it will still have mass. Why? Where does mass come from?

Newton couldn’t explain that. Neither could Einstein. But in 1964 Peter Higgs did.

END_OF_DOCUMENT_TOKEN_TO_BE_REPLACED

Filed under Education, Other stuff on the Internet I like, Unanswerable Questions

Today’s the last day to go see the blue sky project dreamed up for Leith Walk, on display at Out of the Blue in Dalmeny Street – till 5pm today.

There’s more about the background to the project in Monday’s post, but I was really interested by their ideas. You should go look! (And come to the Open Space event on 5th June.)

Leith Walk Out of the Blue

Leith Walk is the longest street in Edinburgh and the one with the most character. It’s one of the most multicultural areas in Edinburgh.

The students of Edinburgh University’s Sustainable Design Master’s Programme are learning “how to design sustainable, environmentally responsive buildings and neighbourhoods” and interested in “how imaginative design solutions can make more resilient and secure communities within existing cities”. 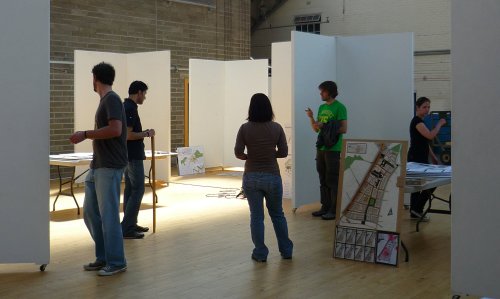 We’re currently working on a project along Leith Walk, extending from the Playhouse to the Sea END_OF_DOCUMENT_TOKEN_TO_BE_REPLACED

Tagged as Leith, leith walk, Out of the Blue, sustainable development, University of Edinburgh