It’s been so long. 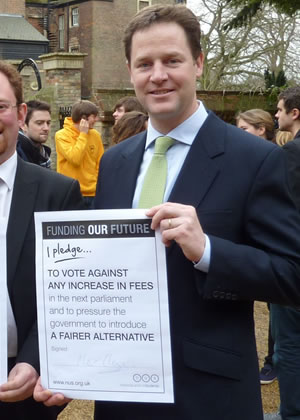 Do you remember this? On Wednesday 28th April 2010, Nick Clegg began a final push for students to vote for the LibDems.

“Labour and the Conservatives have been trying to keep tuition fees out of this election campaign.

“It’s because they don’t want to come clean with you about what they’re planning.
END_OF_DOCUMENT_TOKEN_TO_BE_REPLACED

Blaming Scotland for the tuition fees

I oppose tuition fees and always have. None of the people currently in power had to pay tuition fees for their degree (most of them benefited from the maintenance grants abolished by the last Tory government). Access to further education should depend on ability to learn, not ability to pay.

Further, as George Eaton pointed out in the New Statesman in March 2011:

they will put more universities at risk of bankruptcy. The decision to cut the teaching budget by 80 per cent – including the entire budget for arts and humanities – and introduce a system in which money follows the student, means that universities will be left to sink or swim according to the whims of the market.

I disagreed with tuition fees as a matter of principle when they were less than £2000 a year – I disagree with them still more strongly now the coalition government has raised them to £9000 a year.

But the class action that Phil Shiner proposes to bring against the Scottish government is futile and wrong-headed. Shiner says: “This is a vision of an elitist society dressed up in the language of the big society. The fees system in the UK is deeply discriminatory. This goes to the heart of everything I hold dear.”

He’s right about that. But it’s no sort of use blaming the Scottish government for that – it’s the Tories and LibDems currently in power in Westminister who have decided that English and Welsh students shall pay fees of up to £9000. (Though Welsh students get their fees supported by a bursary from the Welsh government.)

Holding the Scots – or any of our political parties – to blame for a policy instituted at Westminster under Labour, and continued and expanded from Westminister by the Tories and LibDems, is vindictive and futile.

The Scottish government cannot be held responsible for the fees that the coalition government at Westminister have decided to impose on English and Welsh students.