Julian Assange: condemned by his own actions 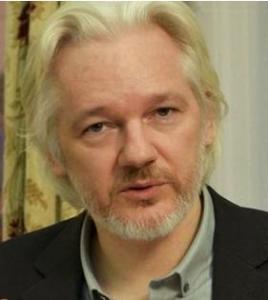 In the summer of 2010, Julian Assange went to Sweden. The servers which host the main Wikileaks website are based there: in August 2010, the primary host seems to have switched from PRQ to Bahnhof. Bahnof servers are based in a former nuclear bunker.

In August 2010, on two separate occasions, Assange met with and stayed one night/several nights with a woman supporter of Wikileaks. Each woman says that the arrangement to have sex was by mutual consent: each woman says that she had stipulated Assange should use a condom. The two women discovered afterwards that Assange had behaved like a boor with each of them: fighting and disputing and trying to bully her out of her stipulation. Assange had achieved his goal of penetrative sex without a condom with both women: In one instance, Assange claimed the condom had “ripped” and so he had been unaware that there was now no condom: in the other, he waited the next morning until she had fallen asleep, and then got inside her when she couldn’t actually say no. The two women took this to the police, and asked if Assange could be made to take a HIV test. None of these facts are disputed by Assange or his lawyers.
END_OF_DOCUMENT_TOKEN_TO_BE_REPLACED

It surely cannot be the case that Assange can rely on his own refusal to go to Sweden to escape answering the allegations. However, this does seem to be the case.

Leo Rosten in The Joys of Yiddish defines chutzpah as

“gall, brazen nerve, effrontery, incredible ‘guts’, presumption plus arrogance such as no other word and no other language can do justice to”.

“that quality enshrined in a man who, having killed his mother and father, throws himself on the mercy of the court because he is an orphan”.

The Oxford English Dictionary will need to add a new definition to chutzpah: Julian Assange.

In Swedish legal procedure, to be charged with a crime you have to be interviewed by the police. Julian Assange has now permanently evaded being charged with sexual assault in Sweden by the following series of actions.

Julian Assange had applied for residency in Sweden on 18th August 2010. On 31st August 2010 he was questioned by the police and told of the accusations: the investigation was re-opened. Assange left Sweden on 27th September 2010, and went to the UK. He did not return. On 18th October 2010, the Swedish Migration Board denied Assange a residency permit: Assange was still in the UK.

On 18th November 2010, the Stockholm District Court approved a request to detain Julian Assange for “questioning on suspicion of rape, sexual molestation and unlawful coercion”. Marianne Nye, the Swedish Director of Prosecution, told the court that Assange he has “not been available for questioning”.
END_OF_DOCUMENT_TOKEN_TO_BE_REPLACED

The statute of limitations for the crimes that Julian Assange is evading justice for in Knightsbridge, will expire this August.

Swedish prosecutors will therefore travel to London to carry out the interview that Assange jumped bail to avoid.

During that interview, Julian Assange is likely to be charged with rape and sexual assault.

But as Assange doesn’t want to go to jail in Sweden for the crimes he has already admitted to in his testimony, it’s likely he’ll stay in the embassy in Knightsbridge until the statute of limitations expires in Sweden.

Doubtless he will still have defenders who think raping a woman while she’s asleep is not that big of a deal. But at least he won’t be able to claim he was never charged with any crimes: he just evaded justice.

Julian Assange is still determined to avoid being charged for rape and assault: the new twist is that he’s got Ecuador to demand that Sweden give Assange asylum in Sweden at the Ecuadorean embassy before they can interview and charge him.

Swedish justice department official Cecilia Riddselius: “You can’t give anyone asylum at another country’s embassy, that’s against international law. If he wants asylum, he has to come to Sweden.”

Until Julian Assange had sex with two women without their consent in August 2010, Sweden was where he intended to make his home and where Wikileaks is still based.

Assange: Not in jail

WikiLeaks founder Julian Assange – hiding for two years in the Ecuadorian embassy – is in “a prison cell with internet access” and “yearns to walk in the fresh air,” says a close friend.

Today, Slavoj Žižek, writing in the Guardian, seems to think that Julian Assange is hiding out in the Ecuador embassy because of something to do with Wikileaks and whistleblowing.

In August 2010, Julian Assange had sex with two women in Sweden. He was, so they both report, aggressive and unpleasant, and very unwilling to use a condom. When they talked to each other and realised he had had unprotected sex against their will with both of them, they went to the police to discover if they could force Assange to take an HIV test – and the police, listening to their account, realised that Assange had by their testimony committed sexual assault and rape.

Until Julian Assange stepped into the Ecuadorean Embassy, nearly two years after the legal due process began in Sweden, he had every element of the justice system due him. He was even on house arrest rather than in prison, in the confidence that he could be trusted with the large amount of money his friends would lose if he skipped bail.
END_OF_DOCUMENT_TOKEN_TO_BE_REPLACED

Could the US extradite Assange?

When WikiLeaks founder Julian Assange released his latest document trove—more than 250,000 secret State Department cables—he intentionally harmed the U.S. government. The release of these documents damages our national interests and puts innocent lives at risk. He should be vigorously prosecuted for espionage.

The law Mr. Assange continues to violate is the Espionage Act of 1917. That law makes it a felony for an unauthorized person to possess or transmit “information relating to the national defense which information the possessor has reason to believe could be used to the injury of the United States or to the advantage of any foreign nation.”

The Espionage Act also makes it a felony to fail to return such materials to the U.S. government. Importantly, the courts have held that “information relating to the national defense” applies to both classified and unclassified material. Each violation is punishable by up to 10 years in prison.

Dianne Feinstein is the US Senator from California since 1992: she was also Mayor of San Francisco from 1978 to 1988. She graduated from Stanford University in 1955: her degree is in History. She is not a lawyer, any more than I am, and while I respect her decades of political acumen, I doubt that she took legal advice before she wrote that column in the Wall Street Journal.
END_OF_DOCUMENT_TOKEN_TO_BE_REPLACED

On 18th August 2010, Julian Assange applied for a residence permit to live and work in Sweden, hoping to create a base for Wikileaks there, because of the country’s laws protecting whistle-blowers. Swedish law prohibits extradition for political crimes: Swden have repeatedly said that the ECHR would intervene if Assange were to be extradited to face inhuman or degrading treatment, such as Assange claims to fear in the US.

If Julian Assange were genuinely afraid of being extradited to the US more than anything else, he would have stayed in Sweden. He fled because he did not want to be questioned by the Swedish police about the allegations of rape made against him by two women in August 2010. He has spent two years trying not to go back to a country where he wanted to live and where he would be safe from being extradited – but where he might well spend up to six years in jail for rape, if the Swedish authorities decide to charge him and if he is convicted.

Government sources in Quito, Ecuador, confirmed today the President, Rafael Vicente Correa Delgado, intended to grant Julian Assange asylum in Ecuador. They also admitted that the offer of asylum was made to Assange several months ago – before he walked into the Ecuador embassy in Knightsbridge on 19th June, following “confidential negotiations” with senior staff at the embassy.
END_OF_DOCUMENT_TOKEN_TO_BE_REPLACED