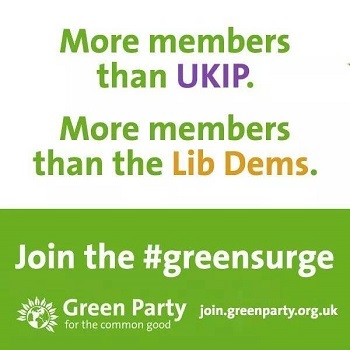 Conor Pope of LabourList wants to believe the Green Party are not a threat to Labour’s chances of winning in May and are not a major party.

In fact, Conor Pope thinks the Green Party are a joke and Labour shouldn’t be frightened of saying so.

He writes of the Green surge:

The latest Green surge, I would wager, comes largely from ex-Liberal Democrat voters. They are another party whose supporters are seen by too many within Labour as faithful who have lost their way, rather than actual opposition. A huge number, of course, ‘came home’ to Labour following Nick Clegg’s foray into the rose garden with Cameron five years ago. We have come to lose them because we have already treated them as though they are our voters by some divine right.

There are certainly left-wing voters who voted Liberal Democrat in 2010 who will never be voting LibDem again – they voted Liberal Democrat because they believed this was a party that would push Labour from the left, not a party that would give us a Tory government most of us never voted for. Those left-wing voters were already lost to Labour because of the Iraq war, because of hospital PFI, because of tuition fees – for any of many reasons for rejecting Labour on the left. I think Conor Pope is right to say that Labour assumed that it could simply scoop up those votes as the only left-wing party remaining, without needing to change any of the right-wing policies which drove left-wing voters away from Labour.

I was a fairly consistent Labour voter: I plan to vote Green in May 2015. I am not alone.
END_OF_DOCUMENT_TOKEN_TO_BE_REPLACED

Filed under Elections, GE2015, In The Media, Women