What was Miliband thinking?
END_OF_DOCUMENT_TOKEN_TO_BE_REPLACED

This other thing that is happening in Scottish politics: the referendum. In the US, where they have referendums whenever they can get enough voters to sign off on one, they went through a phase of holding referenda in which voters were invited to agree that “marriage is between a man and a woman”, which was then held to mean that marriage between a man and a man, or a man and a woman, was unlawful. In the UK we referend much more rarely, and only – so cynics say – when the government thinks they can get the public to vote the way they want.
END_OF_DOCUMENT_TOKEN_TO_BE_REPLACED

David Silvester, elected as a Conservative councillor for Henley-on-Thames (pop. 10,000) resigned from the Tories and joined UKIP in 2013 to protest David Cameron’s support of the Marriage (Same-Sex Couples) Act. A local paper published his letter about same-sex marriage causing the floods on Saturday 17th January 2014.

On Sunday, following a small social media stir, founder of @UpikTips started a new Twitter account that evening: @UKIPweather, which has now tweeted 18 times and has over 100,000 followers – a phenomenon which brought David Silvester’s comments into the mainstream news. (For contrast, UKIP’s official Twitter account has only 36,300 followers.)

END_OF_DOCUMENT_TOKEN_TO_BE_REPLACED

The second, that it had been published purely to traduce a dead man because he was the father of the current Labour party leader Ed Miliband, was so clear that even the usual supporters of Daily Mail politics found themselves choking on it: of the entire Conservative cabinet, only Michael Gove – who used to work for Rupert Murdoch at the Times and whose wife writes for Paul Dacre at the Daily Mail – defended the Mail: every other Conservative minister from David Cameron downward admitted that if that had been his father, subjected to Daily Mail attack after his death, they’d… well… they wouldn’t have been happy about it. Contemptuously, the Mail – and all the Mail employees, from Paul Dacre downward – have refused to apologise, claiming they were entirely justified in their smears of Ralph Miliband.
END_OF_DOCUMENT_TOKEN_TO_BE_REPLACED 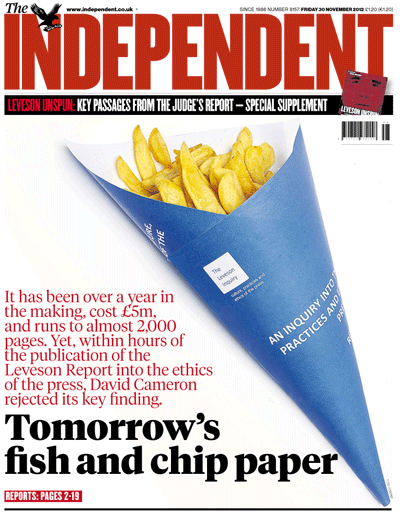 Of the other panellists, Patrick McLoughlin had reason to object to an inquisitive press: his MP expenses were exposed in 2009. Chris Bryant is another of the home-flipping MPs who decides which place is his “second home” depending on how much he can claim in expenses. Simon Jenkins used to edit the Times and the London Standard as well as write for the Guardian. And Neil Wallis used to be executive editor of News of the World, leaving a comfortable two years before Rupert Murdoch tried to shut down all the bad talk about phone hacking by sacking everyone except Rebekah Wade. Neil Wallis and Rebekah Wade were arrested in July 2011.
END_OF_DOCUMENT_TOKEN_TO_BE_REPLACED

Professional politicians don’t usually lose their temper in public except as a calculated electoral shtick. I think IDS just got genuinely angry.

Also a massive shame the welfare debate ended when it just started – the programme was shut down for 5 mins by a protestor – chaos! #bbcqt

Avedon Carol writes about co-optation to try to fight for the “more liberal” of two not-really-opposing bad policy proposals, which usually come in the same package:

Like, say, maybe some sort of choice between a big “tweak” and a very slightly smaller “tweak” that only kills 9/10 as many people as the larger “tweak” will. Or maybe creating a fight over raising the age of retirement even further, so that you’re fighting over 69 or 70. Are any of those proposals acceptable? No, of course not. But if they are suddenly on the table, we will see people allowing such a fight to become the fight, as if lowering the retirement age back down to where it used to be (or even lower) wasn’t even conceivable. It is conceivable, dammit, and for every nasty proposal, there should be a counter-proposal that goes farther in the other direction than politicians have been willing to talk about. They want to raise the retirement age? We want it lowered to 55. They want to change the calculation for the costs of living? We want to change it so that the amount is higher rather than lower. They want cuts? We want the cap eliminated. Don’t even argue about this crap – just go in the other direction. END_OF_DOCUMENT_TOKEN_TO_BE_REPLACED

Today, David Cameron and Alex Salmond meet to decide the terms of the independence referendum. Naturally, they wouldn’t be meeting to “decide” if all the actual decisions hadn’t been worked out already by Michael Moore and Nicola Sturgeon and others, with their civil servants.

The BBC’s “news” report on the meeting that will take place is a fair sample of the “it is expected” style of thing:

It is expected to allow for a vote in autumn 2014 with a single Yes/No question on Scotland leaving the UK.
The deal will also see 16- and 17-year-olds included in the ballot.
The UK government is expected to grant limited powers for the Scottish Parliament to hold a legal referendum, under a mechanism called Section 30.
The Electoral Commission will play a key role advising on the wording of the question and other issues such as campaign finance.
A possible second question on greater powers has been dropped, while the Scottish government looks to have secured its preferred date.