Just For The Record

This is what a “Scottish Defense League” rally outside the Scottish Parliament looks like. 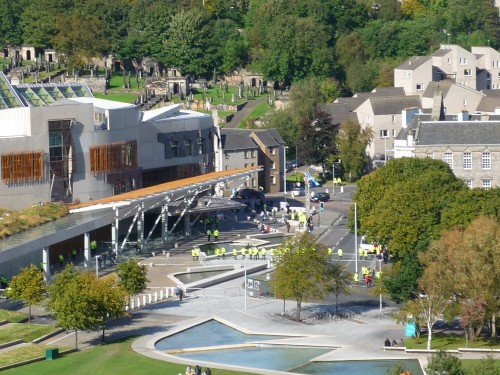 You know how the police usually halve the numbers of any protest: with the SDL I think they double them:

Around 60 members of the Scottish Defence League gathered outside the Scottish Parliament and held a static protest for approximately 45 minutes.

At the same time, 250 members of the Unite Against Fascism group took part in a march from High Street, down St Mary’s Street and along Holyrood Road before holding their own demonstration at the south side of Parliament.

I saw two white minibuses in the car park just outside Holyrood. If those are what the SDL came in, they could have fitted sixty in – but I doubt it.
END_OF_DOCUMENT_TOKEN_TO_BE_REPLACED

How has welfare-to-work become big business?

Today, JobCentre staff who are members of PCS are on strike “over oppressive working conditions and unrealistic targets.”

“Some customers may say they intend to self-harm or kill themselves as a threat or a tactic to ‘persuade’, others will mean it. It is very hard to distinguish between the two … For this reason, all declarations must be taken seriously.” (DWP guidance, April 2011)

April, 2011: a whistleblower at the Department of Works and Pensions admits:

“Suddenly you’re not helping somebody into sustainable employment, which is what you’re employed to do,” he said. “You’re looking for ways to trick your customers into ‘not looking for work’. You come up with many ways. I’ve seen dyslexic customers given written job searches, and when they don’t produce them – what a surprise – they’re sanctioned. The only target that anyone seems to care about is stopping people’s money.

END_OF_DOCUMENT_TOKEN_TO_BE_REPLACED

The previous constitutional posts have been based on a short list of things pretty much everyone agrees you should have in a functioning modern democracy. Politicians in government (or with hopes of being in government soon) may be less enthusiastic about some of the provisions, which are explicitly intended to restrict their power. But most of them are provisions that even the UK’s unwritten Constitution allows for and that even governments with a thundering huge majority will think carefully before overturning.

What follows is a series of ideas that would

“create a constitutional order that reflects a broad public commitment to a more inclusive, egalitarian, and communitarian way, and to mark Scotland out as a ‘progressive beacon’, the following additional provisions might be considered:”

Beginning with the most commonplace:

Cait Reilly has received widespread ridicule from the right-wing press (and Iain Duncan Smith called her “snooty”) for saying her human rights were breached by being forced to work for her benefits in Poundland: I don’t know who first referred to this as “slave labour”, which is banned by Article Four of the Universal Declaration of Human Rights, but we can agree that being required to work 30 hours a week for £2.30 an hour may be illegal, but it is not literally slavery.

Articles 23-25 of the Universal Declaration of Human Rights, however, were clearly breached:

One of the earliest Tory reactions I saw to the news that you can buy a private dinner with David Cameron was certainly predictable: Iain “The Slapper” Dale tweeted

Now is the time for Cameron to say Tories will no longer accept donations of more than £50k. Challenge others to follow suit.

and then in response perhaps to people noting his reaction had sounded almost positive, he added about half an hour later:

Out of threats, there is always an opportunity – Cameron has always been good at seizing these. But perhaps it is Clegg’s moment…

It’s only eighty-four years ago that a working-class woman would have been able to vote at all. (The Representation of the People Acts 1884, 1918, and 1928 gradually removed property tests from the right to vote.) Since it first became possible for working-class men to vote, trade unions have been providing funds to get MPs elected who would represent labour in Parliament. In order to campaign for office, a Parliamentary candidate needs money: in order to win, they need more than just their own personal funds, no matter how large. Even in the age of social media, this is true. And where a politician takes money, they will take policy.

Part of the problem with Labour policy has become the conviction by careerist Labour politicians that they will get funding from trade unions forever while taking their policies from the Daily Mail and The Sun. But that isn’t a problem on the same scale as this:

Peter Cruddas, who having been found out has been ordered to resign, was caught on tape admitting

“Two hundred grand to 250 is premier league… what you would get is, when we talk about your donations the first thing we want to do is get you at the Cameron/Osborne dinners,” he says.
END_OF_DOCUMENT_TOKEN_TO_BE_REPLACED