This was first posted on Facebook on 26th September 2019, with support from my Ko-Fi network.

I didn’t get home from work in time to listen to Boris Johnson in the Commons. At the point when I switched on Parliamentlive TV, Boris Johnson had walked out a few minutes earlier: Anna Soubry was making her point of order.

Boris Johnson lied in his speech – he claimed that the EU were open to negotiating an alternative to the Northern Ireland backstop, and so a withdrawal deal could therefore be negotiated. As several Brussel-based journalists are reporting this morning, EU-27 don’t expect anything from the UK that offers a viable alternative to the backstop in keeping the Irish border transparent/preserving the Good Friday Agreement. They haven’t received anything, and they don’t expect to. But lies about Brexit and EU negotiation are normal from Tory ministers.

Boris Johnson also said, explicitly, he thought the Supreme Court were wrong to rule his prorogation of Parliament unlawful.
END_OF_DOCUMENT_TOKEN_TO_BE_REPLACED 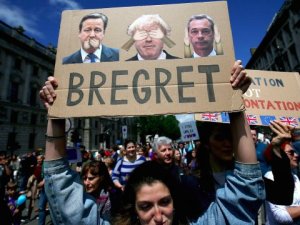 There are four ways the UK can go from here with regard to Brexit, and all of them are bad. Read the first and second directions: hard Brexit, or no deal, soft Brexit, or the EU’s deal.

There is no good way to do Brexit: there is only a choice between catastrophe and different flavours of disaster.

The consistent argument of MPs and others against stopping Brexit – even now when it’s clear that hard Brexit is catastrophic and soft Brexit is not going to benefit the UK in any measurable way – is that a majority who voted in the EU referendum, voted to Leave the EU, so they have no choice: the UK government must obey the will of the people and the UK must Brexit.

But what if the UK ran the EU referendum again?
END_OF_DOCUMENT_TOKEN_TO_BE_REPLACED