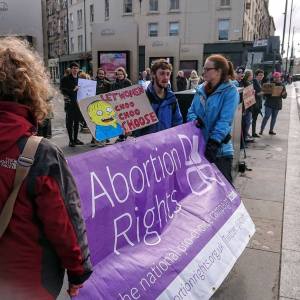 Scotland is a pro-choice country.

About four-fifths of the population of Scotland would agree – this crosses gender-lines, voting-intention, religious belief, class/wealth, or locale – that abortion in Scotland should remain freely available on the NHS.

Only a minority think that pregnant patients who need access to abortion should have that access decreased. That minority can be loud and can be unkind – the ones who think it’s a good idea picketing clinics to hand anti-abortion leaflets to patients are particularly cruel – but they are, everywhere, only a minority.

On 28th April this year in Edinburgh we held our annual celebration of the day the 1967 Abortion Act became law. (On the other side of the road are the sad people who think abortion in the UK should have remained illegal and dangerous.)

We asked people who stopped by our stall to have cake and sign our open letter:

“We stand with the people of Ireland who will be voting to repeal the Eighth Amendment on 25th May 2018: for healthcare in pregnancy to be freely and fully available for all patients. Abortion denial is lethal.”

END_OF_DOCUMENT_TOKEN_TO_BE_REPLACED

The deaths at Tuam: a voiceless testimony 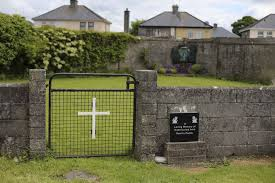 There is an unmarked mass grave in Galway which has become briefly famous by the work of historian Catherine Corless, who spent years tracing the death records of each child whose remains may have been buried there. (You can hear her being interviewed about her work on the mass grave here.)

Timothy Stanley, a Telegraph blogger who converted to Catholicism from the Anglican church, argues that the mass grave is “a human tragedy, not a Catholic one”. At more length, Caroline Farrow, a spokesperson for Catholic Voice, explains that first of all, this wasn’t really so bad, and anyway, everyone except the Catholic Church is probably lying. (I note for the record: the sheer quantity of misinformation and distortion provided by both Stanley and Farrow is quite astonishing.)
END_OF_DOCUMENT_TOKEN_TO_BE_REPLACED

One3one solutions: Justice working for you – at £2 an hour or less.

Prison costs a lot of money: it’s expensive to lock someone up and keep them under guard. If we’re going to spend that kind of money on keeping people who are a danger to society out of circulation for months or years, we should be investing it sensibly and giving people opportunities to reform.

I think it’s a good thing if a prisoner who’s soon to be released from jail can do day-release work outside, get used to interacting with people outside the prison environment before they actually go out for real. I think prisoners should have options to study and get qualifications in prison. I think we should be investing money in imaginative schemes like a prison restaurant, that give prisoners a chance to learn and get work outside, in trying to make sure that once someone leaves prison, they have more options than when they went in.

Andrew Neilson, from the Howard League for Penal Reform says:

“We do welcome these opportunities [for prisoners to work] but it should be on the same basis as anyone else in the community. We don’t want the issue of prisoners on day release being employed becoming one that divides people and effectively people are turned against those prisoners because they’re seen to be taking people’s jobs. That’s not what should be happening.”

I got an email from Mark Lazarowicz confirming that he intends to vote against the Dorries/Field amendments. Good to have an MP you can rely on.

Now on to your blog. Ms Dorries, you’ve said before that your blog is “70% fiction and 30% fact” and your latest post is just 104 words, including the title. That makes it pretty easy to figure out which 30% is fact in your latest post:

Channel 4 Fact Check Telephoned today and asked for information regarding the research supporting the statement I made regarding the Bpas Central London Clinic on the Today programme this morning.

So we gave it to them. There is a huge difference between one to one counselling and a consultation which is about gaining informed consent. There is also an opinion poll published today commissioned by Bpas using tax payers money I assume, which reveals that support for abortion has gone down over the last five years. The poll doesn’t even mention counselling so one wonders what was the purpose? More information on that later.