In 1990, I remember posters that appeared on Edinburgh billboards. The posters announced that the Cultural Capital of Europe was to be found forty miles THAT way – arrow pointing to Glasgow. 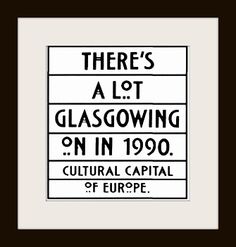 Before 1990, the five cities that had been designated the European Capital of Culture were Athens, Florence, Amsterdam, Berlin (this was in 1988, before the Wall came down: the first and only time a city in two countries was so designated) and Paris.

And twenty-seven years on, we can say: that was well-deserved.

To apply to be declared the European Capital of Culture, a city has to be in a country that is either a member of the EU, is in the process of applying to join the EU, or is within the EEA. The title is managed by the Commission of the European Union.

As the current arrangements for Brexit stand, on 29th March 2019 the UK will leave the EU, has not applied to be within the EEA, and has no public intention to be in the process of applying to rejoin the EU. The applications that cities in the UK were making to be declared the European Capital City of Culture in 2023 were invalid from the date Theresa May invoked Article 50.

We might ask, I suppose, why the Council of Ministers of the European Union took so long to let the cities of the UK know their applications would not be considered for 2023: it seems that they could have told them that they should stop preparing their bids as from April 2017, rather than waiting til after the bids had been submitted in October.

Perhaps the Council of Ministers assumed that Theresa “Brexit means Brexit” May had already stopped the cities from working on the bids, since as she meant the UK to leave the EU permanently, completely, and forever, this must mean she would know the UK couldn’t be part of a EU institution like the Cities of Culture.

Perhaps this was one of those occasions when everyone involved is sure someone else would certainly have mentioned it: perhaps the arrival of the bids came as a complete surprise to the EU Commission, who were sure the UK government understood already that since they were planning to leave the EU in 2019, they would know this meant they wouldn’t be eligible to be the host country for a European Capital of Culture in 2023.

But apparently Theresa May was not told, or if told, didn’t understand.

A spokesman for Theresa May said:

“We disagree with the European commission’s decision and are particularly disappointed we have been informed of their new position after UK cities have submitted their final bids.

“We will be working closely with the five UK cities that have submitted bids to help them realise their cultural ambitions, and we remain in urgent discussions with the commission on the matter.”

What they could say to the Commission is unknown: “Help, we didn’t mean that Brexit means Brexit means we have to lose out on the bits of the EU we actually like!”

EU funding is provided to a European Capital of Culture, and the European Commission reported on the 30th anniversary in 2015 that each euro of public money invested in a city designated a Cultural Capital, returns five or six times to the local economy. The UK government is currently complaining heartily that the EU expects them to pay up even to 31st December 2020, the budget period they had agreed to in 2011 – let alone to the calendar year of 2023.

John Glen, Conservative MP for Salisbury since May 2010, and Parliamentary Under-Secretary for Arts, Heritage and Tourism from June 2017, was a “reluctant” supporter of Remain in February 2016, describing himself as a “lifelong Eurosceptic”, saying he’d “strongly considered supporting the UK leaving the EU” but that he believed that “now is not the time” for the UK to do so.

When the result of the referendum was declared (Salisbury voted to Leave by 52%) John Glen said:

“I am proud to support a government who put this question directly to the people in a national referendum, the first one for 41 years. Now a decisive result has been delivered, as a country we need to get on and secure the best possible future for Britain.”

However, on discovering that Leaving the EU had consequences, John Glen was far from reluctant in saying this was a

“crazy decision by (the) European Commission” and, “We’re leaving the EU – not Europe! My team at DCMS are speaking with the five cities right now on the way forward.”

What John Glen apparently hadn’t found out in his few months on the job as junior minister for the Arts, is that the Capital Cities of Culture is a European Union concept, devised, funded, and planned by the European Union. And as the UK is leaving the EU, which John Glen only reluctantly opposed, means UK cities can’t be part of an EU project after Brexit.

Chris Law, SNP MP for Dundee West, said he had

“called for clarity on the impact the Tory Brexit would have on the bid over a year ago and it’s not good enough that we’ve waited a year for this bad news”.

It would be interesting to know who Chris Law asked, since John Glen was put forward for a quote and he had only been in the job a few months: Karen Bradley, Conservative MP for Staffordshire Moorlands (Leave 64.7%/Remain 35.3%), has been Secretary of State for Digital, Culture, Media and Sport since July 2016 and certainly ought to have been able to give an answer.

These bids were from the Scottish city of Dundee, from three English cities, Nottingham, Leeds, and Milton Keynes, and a joint proposal from three Northern Irish cities: Belfast, Derry and Strabane.

In the EU referendum in Scotland, all regions voted to Remain:

All the Northern Irish cities making the bid voted to Remain:

But the picture is different for the English cities:

Iain Stewart, the Conservative MP for Milton Keynes South, declared on 20th February 2016 that he would campaign to leave the EU.

“Although there are concerns and practicalities which should give us pause for thought, my conclusion is that they are surmountable and that is in the long-term interests of this country to make our break from an organisation that still wishes to head in a fundamentally different direction from what I believe the majority of people in this country wish.”

But apparently Iain Stewart didn’t “pause for thought” long enough: his sulky response to hearing that leaving the EU in 2019 meant that his city could not be selected to be a EU Capital City of Culture in 2023, was to say it seemed

“a very bitter decision” by the commission as “we are not turning our backs on Europe, yet this looks like they are turning their backs on us”.

In 2023, the Cultural Capital of Europe will be Debrecen, Eger, Miskolc, Tokaj or Veszprém. I’m sure all are fine cities and will well-deserve to be the EU’s capital of culture for that year.

For Remain voters, we can be gutted that this is yet another thing the UK has lost, thanks to Brexit.

For Leave voters, stop complaining: this is what you voted for.