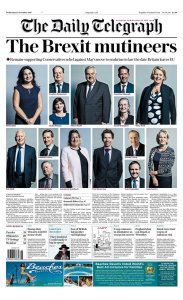 There are four ways the UK can go from here with regard to Brexit, and all of them are bad. We could go hard Brexit, or no deal – that’s catastrophic. We can accept the deal the EU is still prepared to offer us, soft Brexit, which may be only mildly disastrous but which won’t make anyone, Leaver or Remainer, happy: or the third direction, another EU referendum – which will inevitably stir up trouble, potentially very violent trouble, and there is no guarantee that a second referendum would arrive at the desired result; and time is running out.

The fourth, entirely constitutional option, is for the House of Commons to stop Brexit by a majority of MPs voting to revoke the UK’s invocation of Article 50 and remain in the EU.

Fourth: the House of Commons votes by majority to stop Brexit

A majority vote in the House of Commons overrides everything else.

Article 50 must be invoked according to the constitution of the country leaving the EU: the UK had a referendum, but referendums are not part of the UK’s uncodified constitution. Article 50 could not be constitutionally invoked without a majority vote in the House of Commons.

Equally, Article 50 can be constitutionally uninvoked the same way. If a majority of MPs in the House of Commons vote on a motion in proper form, to notify the EU that the UK has decided not to leave the European Union after all, that is both legal and binding.

The UK Supreme Court recently refused to rule as to whether Article 50 was irreversible or not: in any case this is a matter of EU law, not UK law, so a UK Supreme Court opinion would not be binding.

Consistently what we have heard from the EU authorities is that so long as the UK is still a member of the EU – right up until 29th March 2019, even – the UK can, in accordance with its own constitution, revoke its invocation of Article 50 and so remain in the European Union.

Easy. If UK wants to extend A50, or revoke it, just say magic word. Even at last minute.

The House of Commons yesterday – Tuesday 14th November – embarked on eight scheduled days of debate on the EU Withdrawal Bill, beginning with a four-hour debate on repealing the 1972 European Communities Act.

Where this will end, I know no more than you.

But at least fifteen Conservative MPs have already declared rebellion against Theresa May’s desire to have Brexit’s date written into the text of the EU Withdrawal Bill, enshrining 29th March 2019 into law as the date the UK must leave the EU.

Today the front page of the Daily Telegraph names them the Brexit mutineers.

The current state of the parties at Westminster is a razor-thin majority for the Conservative party. They have 315 MPs, making them the largest single party: they have, on questions of confidence and supply, the support of 10 Brexit-supporting DUP MPs and one independent, giving Theresa May’s government a total of 325 or 326 votes out of 650. Subtract 7 Sinn Fein MPs, and to win a vote if every MP of every other party but the DUP is against them, the current Conservative government needs at least 316 MPs voting for her amendments: Labour, SNP, LibDem, Plaid Cymru, and Green total 312. (Of the five independents, two will likely vote with Labour, two will likely vote with the Conservatives, and one will likely vote with DUP.)

Under those circumstances, even fifteen Tory rebels declaring intent to vote with Labour on any aspect of this crucial bill are of crucial importance: if fifteen Tory MPs even abstain, Theresa May has only 300 Tory MPs she can count on, plus ten DUP and probable votes from three independents: 313 votes against an Opposition of 312.

Under those circumstances, if even two Tory MPs do not merely abstain but vote with the Opposition, the government loses.

The Tory Whips will be busy this week.

(Interestingly, the sex-secrets list the Tory whips would have used to “guide and mentor” their flock away from rebellion, was leaked at the end of October, thus removing a lot of its power to control the MPs named on it. But there may be other lists.)

One of the great certainties of British politics, however, is that the Conservative Party hangs together. They have not become one of the oldest political parties in the world by allowing MPs to split from the party over divergent political thinking.

David Davis, and therefore Theresa May, want very much to eliminate any possibility that MPs in the House of Commons could have a vote on whether to Brexit or Remain. On Monday, David Davis announced that MPs would be allowed to vote on the soft Brexit deal that is still hoped for – but not to propose any amendments to it. The vote in the Commons would be only whether to accept the deal or to crash out of the EU with no deal. He further announced that this last vote would not be allowed to be a vote to cancel Brexit.

If they amend it, it would undo the deal. And they might only get to vote on it after Brexit has happened.

This is why Theresa May wants the date of Brexit written into law by Act of Parliament: it sets a further, time-consuming difficulty in the way of any MPs who might still want to oppose Brexit happening at all. If the date of Brexit is only fixed by the requirements of Article 50 and the date of the letter Theresa May sent to Brussels, then 325 MPs – 312 Opposition, shall we say, and 13 Tory rebels – can vote to revoke Article 50 or even just to extend the period during which the UK remains a member of the EU, by any proper motion and debate.

Theresa May clearly sees this possibility as a real risk, or she wouldn’t be so hot to guard against it.

But would it happen?

The consequences of the UK government being defeated on a major undertaking such as Brexit are likely to be a general election.

Possibly not; perhaps the Tories would take down Theresa May and have themselves another leader. But in any Tory leadership contest that went to the Conservative Party membership to decide, would almost certainly pick the candidate for leadership who was pro-Brexit. David Cameron proposed the EU referendum originally to resolve this pro-Europe / anti-Europe split in his party: he assumed Remain would win and the anti-Europe rebels would be silenced. I think it likely that rather than try to resolve the unresolvable, having been defeated on Brexit, even if Theresa May resigned as promptly as David Cameron, her deputy Damian Green (a Remainer) would call a general election rather than try to deal with the consequences of another leadership contest.

What happens in that hypothetical general election?

Three hundred or so MPs, who in this scenario voted to revoke Article 50, for the UK to remain in the EU, go back to their constituencies and have to convince their electorate they did the right thing.

Voting to revoke Article 50 is the right thing for the good of the country as a whole – but it will certainly not be to the good of individual MP’s careers.

The MPs who sat tight and voted for Article 50 to progress as planned, even if that meant hard Brexit, would have as good a chance of keeping their seats in a general election as they could reasonably expect: but the MPs who voted to revoke Brexit, against the will of a majority vote for Brexit on 23rd June 2016, would know they went back to face angry voters who wanted to leave the EU and who had had their belief they were going to, shattered.

One of the things I want to consider at more length in the fifth and final post in this sequence is why people who undoubtedly know Brexit will at best be a disaster, are still supporting it.

On an individual level, for MPs, the situation is quite clear: Providing they keep their seats and their income as MPs, the immediate negative consequences of Brexit will not affect them. They have a salary that puts them in the top 10% by income: they have a generous expenses system and subsidised food and drink at work: and unless something happens to trigger a general election sooner, they have complete job security until June 2022.

To chance losing all of that, against the expense and risk of a general election and facing an angry electorate – not forgetting that one specimen of Brexit-support assassinated a pro-Remain MP in the week before the referendum – most MPs would risk voting for the good of the country only with strong party leadership. As both Conservative and Labour are pro-Brexit, all of the MPs from either party who voted to stop Brexit would be rebels.

I think a majority vote in the House of Commons to stop Brexit is the least-worst of the four bad directions from where we’re at right now.

But such a vote would, I think, both be unprecedented in the entire history of UK party politics – a double rebellion in both government and opposition parties – and kick off a period of political turmoil that would destabilise both the government and the leadership of the Opposition. The general election to follow would be messy and might well be inconclusive: worst-case scenario, UKIP win enough seats to disrupt the day-to-day running of the UK, their one goal to resurrect Brexit.

I can’t end this on an upbeat note: I don’t find anything good about any of the four directions we can go from here, and I don’t see any fifth way out for the UK as a whole*. I think most MPs may see soft Brexit as their least-worst option. I doubt if many of them are seriously considering the constitutional possibility that they could themselves, acting together against their party leadership, stop the disaster that is Brexit in its tracks.

But if you live in a Leave-majority constituency, and want to let your MP know they should vote to stop Brexit, have your say. Who knows – they might listen.

When a Tory MP of the Toriest, Sir Arthur Nicholas Winston Soames, nearly seventy years old, Conservative MP since 1983, grandson of Sir Winston Churchill, sexist old git and as right-wing as you can get, is saying this publicly on Twitter, it does seem that Tory rebellion is possible – if only it can be matched by the Labour Party MPs also rebelling against being expected to vote for Brexit.

It seems to me that many who voted Brexit for their own doubtless excellent reasons did so without having thought through in any grt detail , the immensely complex and often very poor consequences for our poor old country #cockup

Update, 1st May 2018 – Last night the House of Lords voted for what is still in my view the only constitutional way forward: a majority of MPs in the Commons are to have final say on the Brexit deal.