Why is the UK leaving the EU?

“Does anyone know why the UK is leaving the EU?” someone asked.

This was my answer:

From where I’m sitting, the UK is leaving the EU because, in no particular order: 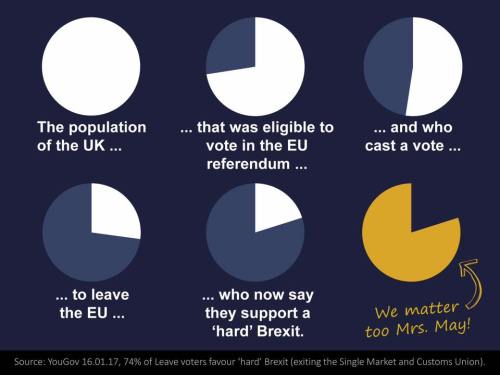 From where I’m sitting, those are the nine reasons why the UK is going to leave the EU.

The Supreme Court ruled today that the Prime Minister is not allowed to take the UK out of the EU using her Royal Prerogative, but has to ask the House of Commons to vote to invoke Article 50.

With both Theresa May and Jeremy Corbyn intending to direct their Conservative and Labour MPs to vote for Article 50, Brexit has a supermajority in the House of Commons: the opposition of the SNP, the LibDems, and the Green Party won’t affect the result.

Enough constituents badgering their MPs to vote against invoking Article 50 might.

Any Member State may decide to withdraw from the Union in accordance with its own constitutional requirements.

The UK’s Constitution is uncodified – there is no single document declaring itself to be The Constitution of the United Kingdom – but it is not unwritten. There are significent pieces of legislation that are recognised as being part of the UK’s constitution: the 1689 Bill of Rights; the 1707 Acts of Union; and more recently, the 1998 Scotland Act, the Human Rights Act, and the Good Friday Agreement. The central principle behind the UK’s uncodified constitution is that Parliament is sovereign, not the head of state nor any written document: and this was the principle upheld by the Supreme Court today.

It is constitutional for the House of Commons to debate on whether to invoke Article 50, and for each MP to vote Yes or No according to their conscience, their desire to be re-elected, and how their party has instructed them to vote.

If MPs do vote to invoke Article 50, the next two-year stage is laid out as follows:

2. A Member State which decides to withdraw shall notify the European Council of its intention. In the light of the guidelines provided by the European Council, the Union shall negotiate and conclude an agreement with that State, setting out the arrangements for its withdrawal, taking account of the framework for its future relationship with the Union. That agreement shall be negotiated in accordance with Article 218(3) of the Treaty on the Functioning of the European Union. It shall be concluded on behalf of the Union by the Council, acting by a qualified majority, after obtaining the consent of the European Parliament.

Either on the date agreed to by the European Council in the withdrawal agreement, or two years after the UK notifies the Council, the UK is out of the EU:

3. The Treaties shall cease to apply to the State in question from the date of entry into force of the withdrawal agreement or, failing that, two years after the notification referred to in paragraph 2, unless the European Council, in agreement with the Member State concerned, unanimously decides to extend this period.

The UK doesn’t have a say in Council on the withdrawal agreement:

A qualified majority shall be defined in accordance with Article 238(3)(b) of the Treaty on the Functioning of the European Union.

And finally, if at the end of all this the UK doesn’t like the withdrawal agreement and decides leaving the EU was a mistake, the UK’s only option is to re-apply:

5. If a State which has withdrawn from the Union asks to rejoin, its request shall be subject to the procedure referred to in Article 49.

No matter what Jeremy Corbyn and Theresa May promise about the terms on which the UK will leave the EU, the deal will be decided on in negotiations between the UK and the European Council, the final say on the withdrawal agreement is by vote in the European Parliament, and the UK’s choice in the end is one of three:

If the UK wants to retain access to the EU’s single market, and to the other international markets which the EU has given the UK access to since 1975, the UK will have to agree to the terms and conditions the Council of Europe sets.

None of this is true. The UK has almost no experienced trade negotiators: since 1975, it’s not needed them. The UK needs the EU market significantly more than any country in the EU needs the UK’s market.

The EU can tell the UK: If you want access to the EU’s single market, you must agree to pay all of the EU’s fees, you must join the Schengen Area for free movement, and you must agree your country will abide by all of the EU regulations. If the UK accepts those conditions, Brexit will leave the UK only a little worse off than before.

If the UK leaves the EU, the UK will be entering a prolonged recession. Food will get more expensive – the UK imports almost half of what we eat. Unemployment will rise, as businesses that depended on the UK’s membership of the EU either leave the country or go under. As the value of the pound dips, anything imported will become more expensive. Providing the UK’s Border Office doesn’t go silly about foreigners, the UK may benefit from tourism as the low pound makes the UK a cheap foreign holiday.

For cheap-work conservatives, this is all good news. A hard Brexit with no access to European-mandated workers rights combined with high unemployment, rising prices, and an austerity-slashed benefits system, means a large supply of people who will be desperate to work longer hours with less pay and fewer rights just to stay alive.

For the rest of us: this is unqualified economic disaster. And it is inevitable. The best possible result for Brexit is that the European Council comes up with a fair agreement that gives the UK with access to the single market conditional on fees, regulations, and free movement of labour, and the UK accepts it.

Some Brexiteers have argued the UK could be just as well off if it became a member of the European Free Trade Association, like Norway. But that’s dependent on Norway’s goodwill, as well as that of the other EFTA countries.

Just as a for-example: does anyone think Theresa May will agree for the UK to join the Schengen Area?

Other consequences to Brexit, less inevitable but even more deadly:

Hate crimes against anyone who looks like an ‘immigrant’

Brexit arose in part because of the tendency of white Brits to express their racism in the form of hatred against immigrants. And by “immigrants”, a white Brit can and will mean anyone, regardless of birth or nationality, who doesn’t look like a white Briton.

Brexit means economic recession. A lot of white Brits will find themselves much worse off once the UK has left the EU. Who is to blame for this? Are they really going to have a Damascene conversion and realise that if they voted Leave, this is what they voted for?

History suggests that it’s much more likely that if they’d already targeted an identifiable group of people who were to blame for what was happening to them, they’ll step up the blame. Except in Scotland, race and religious hate crimes rose massively after Leave won the EU referendum.

The Troubles return to Northern Ireland after twenty years of peace

The Republic of Ireland is a member of the EU. Since 1975, so was the UK, including Northern Ireland.

If the UK decides on hard Brexit, no freedom of movement, no market access – what happens to that open border needed for the peace?

Northern Ireland voted by majority to Remain, but Remain’s victory broken down by constituencies was nastily split.

Despite this we can and should hope and work for a peaceful democratic settlement in Northern Ireland post-Brexit: but until the EU referendum, there already was one, disrupted now for the nine reasons listed at the head of this blog.

And finally, not deadly but dead serious:

In 2014, the Tories and Labour flung themselves jointly and severally into campaigning to keep Scotland part of the UK.

In 2017, both parties seem to have decided that for Scotland to stay in the UK isn’t nearly as important to them as it is for the UK to leave the EU.

Scotland voted by a substantial majority to Remain. I can’t speak for all No voters, but I voted No in 2014 with reasonable confidence that the silly EU referendum David Cameron was promising the anti-EU supporters of his own party would never happen.

I also voted No because the SNP’s plans then for an independent Scotland would have prevented iScotland from joining the EU by denying us a central bank of our own. I voted No to the SNP’s sterlingzone because that would ensure iScotland could not be independent in the EU.

I also voted No because the SNP’s White Paper assumed as blithely as any Brexiteer on leaving the EU, that the United Kingdom we were leaving would provide iScotland with all the help and support the SNP deemed necessary. I thought this was unlikely in 2014: I think it all the more unlikely now. The EU isn’t happy or cooperative that the UK wants to leave: rUK will not be happy or cooperative if iScotland leaves.

I do not want to be attached to an England voting for a dream of Empire and falling into recession because the imperial rungs have been missing from the ladder for a long, long time.

I do not want to be living in a country that is basing its foreign and trade policy on a racist fear of immigrants.

For those who argued in 2014 that Scottish independence was a huge risk, a chancy leap to an uncertain future, well, I agreed with you then: but so is Brexit, and Brexit is worse. Brexit is about fear and hate and racism and post-imperial arrogance and the very rich smirking knowingly that recession will be good for their business.

Scottish independence is, at its best, based on a dream of a better nation. This is not how I would have preferred to decide for independence. But here it is.

If the UK Parliament votes for Brexit, go we must: we cannot stay.

3 responses to “Why is the UK leaving the EU?”