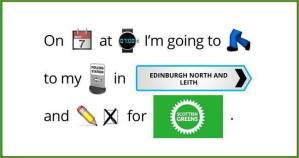 Why can’t the BBC see Green?

The BBC has decided that UKIP is, in Scotland, now electorally equivalent to the Scottish Greens, and should receive similar election coverage for the 2016 Scottish Parliament elections on 5th May 2016.

In doing so, the BBC Trust doubtless hope that pretending in advance that UKIP is a major party in Scottish politics will make them so.

(In the South of Scotland, Scottish Green got 9,467 regional votes.)

In the second Holyrood elections, 1st May 2003:

In the third Holyrood elections, 3rd May 2007 (the guddle of the ballots year):

(For comparison, in 2007, the BNP also stood candidates in every region in Scotland and got 24,616 regional votes.)

In the fourth Holyrood elections, 5th May 2011:

(For comparison, the Scottish Socialist Party stood 31 candidates and got 4,183 first-preference votes and one councillor, Jim Bollan in the Leven Ward of West Dunbartonshire council.)

To break that down still further:

UKIP have never won any seats in any council election in Scotland.

In May 2014, for the first time, UKIP got an elected representative in Scotland: David Coburn, born in Glasgow, is now one of six MEPs for Scotland, home address in Kensington: not registered to vote in Scotland – at least, not by September 2014. Coburn’s website still describes him as “UKIP London Regional Chairman, Member of UKIP NEC, UKIP London Assembly candidate”.

UKIP’s only Scottish MEP lives in Kensington and wasn’t registered to vote in Scotland for the independence referendum.

Coburn also stood as a candidate in Falkirk in May 2015 UK general election and managed to outpoll the LibDem candidate by a few hundred votes – both UKIP and LibDem lost their deposit with 3% and 2% of the vote respectively. The Scottish Greens, targeting their resources, didn’t stand in Falkirk constituency in the UK general election, so no direct comparison is possible, but in a council by-election in Falkirk on 13th August 2015, the Scottish Green candidate got 4.6% of the vote – UKIP didn’t stand.

But the BBC’s policy in Scotland has steadily been to treat UKIP as if it were a bigger party – as if it were electorally equivalent or even greater than the Scottish Greens.

The BBC’s policy in Scotland has steadily been to treat the Scottish Greens as if it were a minor party, rather than one of the five major parties in Scotland.

For the Scottish Parliamentary elections this year, the BBC plans to perpetuate its previous bias against the Scottish Greens and in favour of UKIP, claiming:

“Since 2011, Ukip has demonstrated an increase in support in Scotland and this should be reflected with coverage up to a similar level to the Scottish Green Party.”

Arthur Misty Thackeray, chief of staff for the Kensington-based UKIP MEP, is apparently hoping to become a regional MSP for Glasgow despite previous comments about the “the institutionally Catholicised pretendy parliament”.

“Only five parties have won continuous representation in the Scottish Parliament and the Greens are one of them.

“It is disappointing that the BBC Trust’s proposed guidance does not reflect this.

“Polling clearly shows the Greens on course to outnumber the Lib Dems, so the proposal to give them parity with the other three parties but relegate us does not add up.

“Given the significant role Scottish Greens are likely to play in the next parliament, the public deserve to hear and scrutinise what we have to say.

“We’d urge anyone who believes the Scottish Greens deserve fair treatment from the BBC in the run up to and during the 2016 election to join us in making this case.”