Fate of the Third Child

From 7th April 2017, parents claiming child tax credit will be limited to claiming it for two children only. This is George Osborne’s latest flashy scheme for punishing low-income families in a pretence of “saving money”.

Liz Kendall openly supports this: Andy Burnham and Yvette Cooper decline to oppose it (Cooper says she’ll “fight” it but that didn’t extend to voting against it in the Commons). They know that 50% of people who voted Labour in May 2015 support the two-child rule, and Burnham and Cooper aren’t about to try to stick their heads over the parapet and say it’s wrong to do so.

I wrote a few weeks ago why I think this policy is wrong, but this post is about the people who are blithely sure this won’t really affect children of low-income families, and why they haven’t thought it through.

Hidden away in paragraph 2.103 of the “red book” (the budget) is the following sentence: “The Department for Work and Pensions and HMRC will develop protections for women who have a third child as a result of rape, or other exceptional circumstances.”

In other words, a rape test will be introduced into our welfare law. The implication being that those mothers who can provide evidence of rape will not have their tax credits removed, presumably because they did not choose to have a third child.

A woman who was made pregnant by rape and decided not to have an abortion, is allowed to claim child tax credit for the rapist’s child.

A woman who was made pregnant by a casual consensual encounter where a condom broke (and the first pharmacist she went to was a prolifer who didn’t believe in emergency contraception) and who then decided not to have an abortion – isn’t allowed to claim child tax credit, because, the feckless slut, she actually enjoyed having sex when she engendered her third child.

Most parents aren’t going to make the third child do without the kind of things the first two children can have with “their” child tax credits: instead, all three children – the entire family – will suffer financially because of this.

Some women will decide, in the face of the financial penalties to be imposed on them by this system, that if they get pregnant a third time they’ll have an abortion. That is forced abortion: if a woman would rather have had the baby but can’t face the financial penalties to be imposed on her for having a third child, a privilege which is, to Osborne and IDS and Liz Kendall, reserved for people too wealthy to need child tax credits. Or should the surplus children be winnowed out of the family, put up for adoption to wealthier or childless couples or put into care?

(I should say that I am one of three children: yes, my parents had the kind of family that Liz Kendall thinks should be subjected to financial penalties to teach ’em better.)

We live in a country where a woman who steals three bottles of baby milk from Sainsburys (total retail price, £10.47) is

handed a six-week community order with curfew and was ordered to pay a £150 criminal courts charge, £85 costs and a £60 victim surcharge

We live in a country where a man whose wife is in hospital, who has three children, one with cerebral palsy, is forced to put them into care because of sanctions on his benefit for not applying for work while a full-time carer:

The Jobcentre called him in for a back to work interview. They unlawfully told him that he had to look for work and start claiming Job Seekers Allowance (JSA). Yes we know that he did not by law have to do this, indeed his place was to be at home caring for his disabled child and his other children.

He said his whole life felt like he was on a treadmill. He had no rest. They kept sanctioning him because they said he hadn’t looked for work enough. He said he had, but he also had to care for his children. Then the sanctioning started. One sanction after another. He was going hungry, and he didn’t know what to do.. He just saw himself as a failure to his children. He said to me “I couldn’t even provide £70 a week for them. I’m a failure as a parent”. So he took the only option that he thought he could take at the time. He contacted social services and told them that they would have to take over the care of his children. He couldn’t provide for them. He could give them love but it’s not enough he said.

On Thursday I saw a broken and angry man. He said that he has nothing really to live for and is a failure. He couldn’t even provide £70 a week for his children he says. He also said to me that now they are in care they get everything that they need, everything that he couldn’t provide because the DWP refused him the basic human right of being able to bring his children up in their home environment.

But he and his wife had three children.

We live in a country where Osborne, IDS, and Kendall would begin by sanctioning him of child tax credits for the third child. Because he and his wife should have known they were too poor to be allowed to have more than two children.

And for those who support Liz Kendall for leader of the Labour Party, it’s important to them that the Labour Party not look like it’s any kind of political movement to support parents in that kind of horrendous situation: stealing baby milk? Fine her! Wanting to be a full-time parent to his kids? Sanction their benefits until he puts them into care!

For people who support the “two child rule”, especially those who were born and brought up in two-child families and who have chosen to have only two children themselves, this “third child” may be an abstract concept, a luxury expense that most women should know they can’t afford to have.

But to me, one child in a three-child family: each of us was a real person. Tell my parents they have to decide to lose one of us or live in poverty, they’d choose poverty rather than pick out one to get rid of.

Bringing up children in poverty doesn’t save money, neither in the short run nor in the long view.

But even if it did, making children suffer for their parents’ choices will always be the wrong thing to do.

And at what point does this stop, once you accept that families on a low income should be forced to limit their children to no more than two, by whatever financial penalties can be imposed? There is voiceless testimony to the fate of children deemed surplus to requirements, children whom it was thought right to penalise because their mothers had had babies they could not support themselves.

I asked one Liz Kendall supporter how she thought the third child ought to be dealt with: her responses indicated she hadn’t actually thought that far ahead. (And then she blocked me.) But she knows this policy is popular, and that’s what matters. Not whether it’s right. Besides, she’s in favour of “people not getting pregnant”: the fate of the third child does not concern her.

To people in my position, austerity can be read as regrettable but pragmatic. But to my friends and family, who live outside the bubble, it’s not regrettable, it’s terrifying. It’s also not pragmatic. The crackpot, gimcrack ideological nature of austerity becomes more apparent the closer you get to the point of delivery.

Outside the bubble, everyone knows that an economy in which you can work 50 hours a week and still need tax credit to make the rent is a broken economy. To those outside the bubble, a Parliament that knows the country does not have enough houses yet cannot bring itself to build any for fear of “interfering with the market”, is not a Parliament at all. And a media that sees a 50p top tax-rate, public investment and re-nationalisation of the worst failures of privatisation (railways and energy) as politically dangerous is a media whose understanding of politics has shrivelled into mere gossip. – Why Corbyn is so popular, by Frank Cottrell Boyce 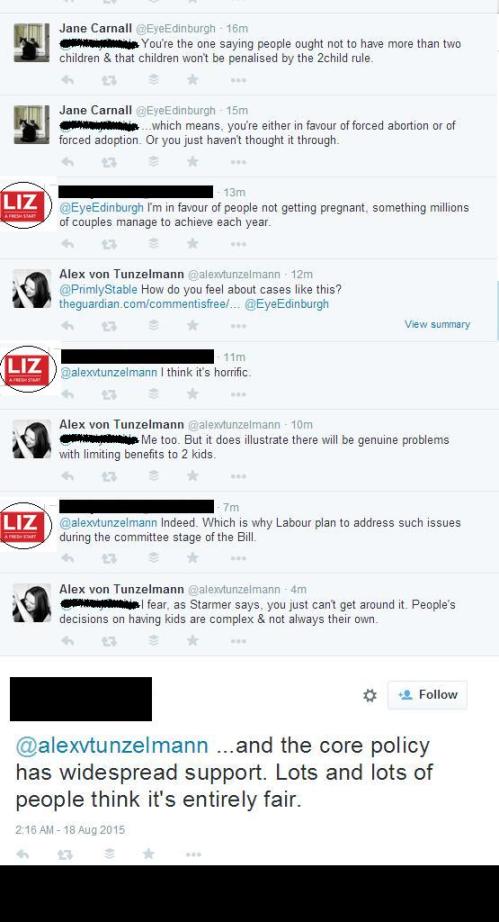 13 responses to “Fate of the Third Child”