What was Miliband thinking?

Well, in part, he was certainly thinking: the election isn’t over til 10pm Thursday 7th May. Right up until the last vote cast, both Miliband and Cameron must be hoping against hope that they might win a majority. Electoral Calculus, with the poll of polls from 12th to 29th April gives this as an only 8% probability, but Miliband more than Cameron has some basis for hope that the polls are wrong. SNP candidates might sweep Scotland as the polls have been suggesting: or at the ballot paper voters might decide to vote in favour of the incumbent Labour MP rather than the new SNP candidate.

(Interestingly, given the headlines proclaiming a sweeping SNP victory in April and that the SNP have never had more than 11 MPs at Westminster before, if the SNP won 29 constituencies and Labour won 29 constituencies both parties could then claim that as a thundering victory… and the LibDems could be chuffed that despite everything they still kept one MP.)

But once the votes are counted and the results are in, despite all their previous hopes, Ed Miliband and David Cameron are faced with the old Parliamentary rules about hung parliaments, the new rules set by the Fixed Parliament Act, and the inexorable House of Commons arithmetic that says they must have 323 MPs to vote for their Queen’s Speech in order to pass their legislative plan and form their government.

Parliament returns on Monday 18th May: David Cameron and Ed Miliband have 10 days to form a government. But the hard deadline is that on Wednesday 27th May is the State Opening of Parliament and the Queen’s Speech: and a majority of MPs must vote for the Speech to accept the government’s proposed legislative programme.

Not even the most optimistic polling result – showing a high for the Tories of 315 or a high for Labour of 304 – gives either party a majority.

David Cameron gets first chance as incumbent Prime Minister. If, as Electoral Calculus suggests today, he has 280 Tory MPs, he might be able to get 27 LibDem votes, perhaps as many as 3 UKIP votes, and certainly no more than 10 DUP votes. That still falls 3 short of the bare minimum Cameron needs, and support from two out of three is a bit shaky.

The DUP have made clear they will support either Labour or Tory, whichever makes them the better offer (“We are in contact with all parties. We would go and see Labour and Ed Miliband on such terms.”) If Nick Clegg loses his seat, the LibDems are unlikely to rush into a new coalition deal with the Tories and Nick Clegg has ruled out any coalition that includes UKIP or the SNP. And while UKIP would probably support the Tories unconditionally if it came to that, they’re not likely to have enough MPs to make a difference.

So much for Cameron: unless Tories and LibDems both do unexpectedly better than likely, winning swing seats from Labour and hanging on to incumbent MPs in Scotland, he’ll have to give up on the idea of forming a government.

Can Labour form a government?

Ed Miliband’s prospects of being Prime Minister looked much more solid than Cameron’s until last night.

True, Labour appears likely to have only 275 MPs – fewer MPs than the Conservative Party. But as leader of the largest single party in Opposition, once Cameron has tried and failed to form a government out of the Tories, LibDems, UKIP, and DUP, Ed Miliband will be invited to do so.

According to Electoral Calculus, the SNP will have 55 MPs. The Parliamentary arithmetic is clear: 275+55=330 is a Commons majority. Plaid Cymru will have 3 and the Green Party 1 MP: those four are likely to vote with the SNP.

Further, Miliband has a security that Cameron does not have: if the SNP have fewer MPs than polls currently predict, that effectively means that Labour will have more MPs than current polling predicts. For the most part, a seat not gained by the SNP, is a seat retained by Labour. Nicola Sturgeon has made repeated public promises that the SNP will support Labour to lock the Tories out of government, no messing around with Tory deals. That 330-MP majority was looking very solid: we could begin to consider the advantages of a Labour government with SNP support. (Energy policy looks interesting.)

Until Ed Miliband said he wouldn’t have it.

What is Ed Miliband thinking, aside from the improbable dream that maybe Santa Claus will give him a Labour majority in the Commons on 8th May because he’s been a good boy?

The London-centric media and the Tories – and Scottish Labour – have repeatedly been claiming that SNP support would make a Labour minority government illegitimate: that the English voters don’t want the SNP.

And the SNP hasn’t helped. Nicola Sturgeon has made calm public promises to support Labour and lock the Tories out of government: the SNP campaign has – in a phrase repeated to me many times – claimed that Labour and the Tories are so close there’s now “not a fag papers worth of difference between them“. This isn’t true: if you look at actual policies, the SNP and Labour are as close as Ginger Rogers and Fred Astaire: the Tories and UKIP are away over to the right.

But Ed Miliband wants to be Prime Minister (or so we must hope) and he can do the Commons arithmetic as well as we can: he can’t be Prime Minister without SNP support. What will he do, between 8th and 27th May, if the Tories have five more MPs than Labour and are busily doing deals with LibDems, UKIP, and DUP – while Ed Miliband has foolishly promised Labour won’t do deals with the only party that can give Labour a majority? 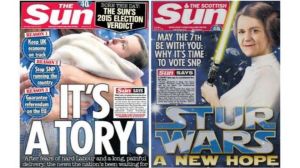 Bear in mind that since Ed Miliband announced that a Labour government would abolish non-dom tax avoidance the non-dom owners of most of the major British newspapers have decided they don’t want a Labour government after all: Rupert Murdoch got The Sun to come out in favour of the Tories in England and the SNP in Scotland, anything to avoid a pro-Labour front page.

(Besides non-dom tax status, Murdoch doesn’t want Labour to be in government because of fear that Labour will finally force News International to break up its business model of media control.)

Labour government with or without SNP support will have no backing from the tabloids: the popular press will argue, spurred by their non-dom ownership, that if the Tories have the most MPs and are putting together a coalition, they have to be in government: even if the SNP have publicly guaranteed they’ll vote with Labour against the Conservative Party’s Queen’s Speech.

Dramatic vote against the Queen’s Speech?

Is Ed Miliband really envisaging that he can sit tight for 19 days doing nothing while the Tories form a government – and then muster his Labour MPs to vote against the Queen’s Speech on 27th May and expect the SNP to vote with them? (I’m sure the SNP would.) That would be a very dramatic moment – worthy of a Frank Capra movie – but it’s not the way Westminster tends to do things.

When Ed Miliband says “If the price of having a Labour government is a deal or coalition with the SNP, it’s not going to happen” – he’s putting a politician’s construction on the word “deal”. Which is to say: he’s lying.

At least, I hope so.

How can anyone who opposes Tories trust @Ed_Miliband if he'd rather have a #Conservative govt than #Labour with #SNP? pic.twitter.com/aWixn2G4xG

5 responses to “Does Ed Miliband want to be Prime Minister?”