So, taking all this into account, I believe controlling immigration and bringing it down is of vital importance to the future of our country.
That’s why during the election campaign, Conservatives made a clear commitment to the British people…
…that we would aim to reduce net migration to the levels we saw in the 1980s and 1990s.
Now we are in government, we are on track to meet that aim.

Nick Clegg thinks that the problem with that promise was that it was undeliverable:

“I said to David Cameron he shouldn’t make the commitment because it was inevitable he was going to break it because you can’t control the net figure… We said we were not going to do it as a coalition government. It is very embarrassing for the Conservatives. They made a huge amount of fanfare about it and they were warned by me and others ‘Don’t do this, it doesn’t make any sense’.”

(If you are a white UK-born LibDem supporter, however, the Conservative/LibDem government responsible for this is “The best UK Government of my lifetime”, so there.)

Labour think they’ll pick up votes by pledging to have more controls on immigration. 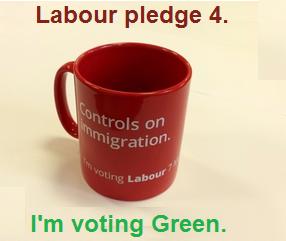 (Though in fairness, Diane Abbott condemned the mug as “shameful” and the pledge as a problem, for which she was predictably condemned in the not-at-all racist Spectator. (There’s just something about Diane Abbott they don’t like.))

Cheap-work conservatives encourage racism, misogyny, homophobia and other forms of bigotry. Why? Bigotry among wage earners distracts them, and keeps them from recognizing their common interests as wage earners.

The BNP, the English Defence League, UKIP – they all make their play on wanting people who are suffering the problems of homelessness, low wages, zero-hours contracts, unemployment, to blame immigrants, refugees, and asylum-seekers, not the people who make policy ensuring there are not enough homes to live in, low minimum wage and weakened unions, an economic “recovery” for the rich and food banks for the destitute.

They’ve done this by several means:

Second, the 180-day rule has been applied retrospectively to my case and unfairly. I did not break or breach visa rules, as some media reports have misleadingly suggested. There was an immigration policy change in 2012, after my visits overseas. Before the change, I planned to extend my migrant visa, and the 180-day absence rule did not apply. But in 2012 the maximum period of extension became six years, so I had no option but to seek indefinite leave to remain. Under the earlier rules, work-related absences were regarded as “compelling”; but after 2012 this was no longer to be the case. Where in any of this is there natural justice? –Miwa Hirono, “my Home Office hell”, TES, 25 March 2015

Thousands of Britons have been unable to bring a non-EU spouse to the UK since July 2012, when the minimum earnings requirements were introduced.
When the policy was launched, the government said only British citizens, or those with refugee status, who earn at least £18,600 a year can sponsor their non-European spouse’s visa.
This rises to £22,400 for families with a child, and a further £2,400 for each extra child. BBC, 10 February 2014

If you’re interested, check here the kind of work a British spouse might be doing which would ensure they’re not likely to earn enough to sponsor their non-EU spouse to live in the UK, especially if they have a child.

Under the Tier 4 visa regime, students face tougher questions about their destination, limits on their ability to work and tighter rules on their English-language capability. “Decline of overseas students at England’s universities”, BBC, 2 April 2014

And all of the traditional methods of keeping foreigners out: ruling that a marriage is fake, asylum decisions based on homophobic stereotypes, and demanding that a married couple prove their relationship is “ongoing and emotionally supportive”:

“How am I going to show them that we have a loving relationship? We’ve been married for 45 years, we’ve known each other for 50 years,” she said. “We’ve been together for a long time. It’s not like I’m a young bride and wanted citizenship somewhere.”

Summers reluctantly returned to Ottawa last April, leaving David behind to care for his mother.

“This Christmas was the first Christmas we’ve been apart in almost 50 years,” she said. “That was tough.”

The Home Office is required by a Prime Ministerial promise to accomplish an impossible task: in the 21st century, reduce immigration to the numerical level of a much lower population. To try to meet that target, they’re trying to keep people out by any means they can. And this is the result.

The Conservatives will always be anti-foreigner and courting the bigot vote. That’s who they are and what they do. We need to convince Labour they don’t need the bigot vote as much as they do the opposition to it; those of us who know that harassing people who want to come live and work and study in this country is a pointless, vicious waste of time and effort.

Immigrants are not the problem. They never are: they never were.

Filed under In The Media, Racism