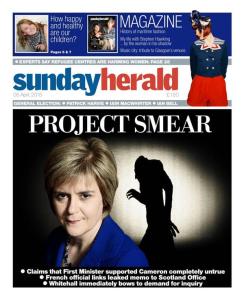 The memo attack on Nicola Sturgeon, a day after she had been lauded at the leaders’ debates, was certainly an attempt by the Daily Telegraph to discredit her. If the Telegraph employees who contacted Labour and the LibDems for comment were subtle enough, it was also an attempt to discredit those two parties.

The Head of Content (as Peter Oborne noted, the Telegraph no longer has an editor) may have been instructed by David and Frederick Barclay to win the general election for the Conservatives: and it is a matter of simple Parliamentary arithmetic to see that if the polls hold good, providing Labour and the SNP are willing to vote together against the Tories, the Tories cannot form a government.

Scottish Labour had a night to howl about this: between the first tweet from Simon Johnson at the Daily Telegraph at 9:42pm, to a final tweet by Scottish Labour at 7:55am on Saturday 4th April, the Scottish Labour twitter account either tweeted or retweeted 22 tweets, including one apiece from Kezia Dugdale and Jim Murphy, and two from Scottish Labour candidates, Margaret Curran and Douglas Alexander. (If Mhairi Black, the SNP candidate for Paisley, unseats Douglas Alexander, she will be the youngest MP ever to be elected, aged 20.)

So how long before @scottishlabour produce a poster of Cameron with @NicolaSturgeon in his pocket? Counting the seconds…

The Telegraph had let Labour and the LibDems know about this story, asking them for comment: no one had contacted Sylvie Bermann, the French Ambassador, nor had they asked Nicola Sturgeon or the French consul-general for Glasgow and Edinburgh, Pierre-Alain Coffinier, for comment on the story that so closely concerned them. All of them said that the Telegraph’s version of the memo’s crucial paragraph was untrue: that Sturgeon and Bermann had not discussed any preference for the results of the 7th May election. So, the story was denied by all who had been present at the meeting, and turned out to have been based on the Telegraph’s interpretation of a memo, probably written by a Scotland Office civil servant, from information given over the phone by Coffinier. (The Guardian’s political editor, Patrick Wintour, had evidently spoken to the author of the memo: he reported on Twitter that the author did not know the identity of the leaker.)

[Update: by the afternoon of Sunday 5th April LibDem minister Alistair Carmichael had definitely confirmed “I understand that the memo in question did actually come from the Scotland Office, but these things circulate within government” and Coffinier had also confirmed that he had phoned a friend at the Scotland Office to give them an account of the meeting between Sturgeon and Bermann, but that the memo was “not very accurate”.]

By mid-afternoon on the 4th, the story was looking so discredited and so discreditable that Kezia Dugdale got a tweeted reply from her father Jeff: “Check facts before opening mouth, Kezia!” Tim Fenton, author of the ZeloStreet blog, suggested that there was a possibility the memo didn’t even exist, that the Telegraph had made it up or inserted the crucial paragraph themselves, but this does not appear to be borne out by other facts since discovered.

The Telegraph must have known that Scottish Labour would react to the story: and for them, as for the Conservatives, it was a win-win situation. If Scottish Labour managed to whip the story up into a fullblown scandal attacking the SNP, the Conservatives could only benefit: Labour is far less of a threat to cheap-work conservatism in the UK than the SNP. As Nicola Sturgeon noted:

And the conversations I had brought it home to me just how persuasive and compelling that anti-austerity message is, as some of the people I spoke to told me that they wished they had the opportunity to vote for SNP candidates in England. It was validation of the approach we have adopted to this election campaign, and personally it buoyed me hugely going into the second half of the debate.

It is natural to be apprehensive ahead of an encounter as high-profile and important as last week’s contest, and I don’t think myself or any of the other leaders would be entirely truthful if we said we had not experienced any nerves. The opening half of the debate had already given me confidence that the SNP’s message was finding its mark, but my interval chat with the audience fired me up for the remainder of the contest. I knew I was speaking not just for many people in Scotland, but for the very many across the rest of the UK who effectively feel disenfranchised by the policy menu offered by the establishment parties at Westminster.

If – as actually happened – the story was discredited, then if Scottish Labour had invested themselves in an attack based on a right-wing London-centric paper’s smear of Nicola Sturgeon, Scottish Labour doesn’t look good in Scotland. And this too can only help the Conservatives.

But someone leaked that memo to the Telegraph, and whoever legitimately had access to it, it was not legitimate for them to make it public. The British civil service is supposed to be entirely politically neutral. Memos written by civil servants outlining confidential discussions between ministers and ambassadors are never supposed to be visible to the public. Sometimes a leak may absolutely be justified as in the public interest – the Telegraph in 2009 was justly praised for accepting and publishing the MP expenses material, also a civil service leak. (In fairness, though the civil servant who leaked the MP expenses was apparently paid well for the information, the leak itself was as politically neutral as the Civil Service reputation and absolutely in the public interest: MPs of all parties turned out to be on the fiddle.)

To recap the timeline:

Sturgeon and Bermann meet on Thursday 5th March: they have a conversation which may have touched on Ed Miliband as prime minister and the effects of Conservative government on the SNP, but which – all who were present agree – did not discuss the future results of the General Election scheduled for 7th May.

On Friday 6th March, a civil servant at the Scotland Office talked to the French consul-general on the phone: Coffinier gave the civil servant some notes about what Sturgeon and Bermann talked about. The civil servant, writing up the paragraph which references Miliband and the Conservatives, notes that:

I have to admit that I’m not sure that the FM’s tongue would be quite so loose on that kind of thing in a meeting like that, so it might well be a case of something being lost in translation.

Sometime between Friday 6th March and Wednesday 2nd April, someone saw this memo and realised that, suitably distorted in reporting, the last paragraph could be an embarrassment to both the SNP and Labour, especially if Labour can be enticed into an angry public response. And this someone then leaked it to the Daily Telegraph, which then carefully did not ask Sturgeon, Bermann, or Coffinier if the account of the conversation was accurate – but did let Labour and the LibDems know that this story was coming out on Friday night by asking them for quotes responding to the statements they claimed Sturgeon had made.

It’s the person who realised the memo could be used against Sturgeon and Scottish Labour and who leaked the memo to the Daily Telegraph, who has committed a breach of ethics, probably a breach of their conditions of employment, and quite possibly, has broken the law.

Nicola Sturgeon has called for an inquiry into who and how the memo was leaked, and the Cabinet Secretary and Head of the Civil Service, Jeremy Heywood, has agreed.

Sturgeon was right to call for an inquiry, and Heywood was right to agree: this is seriously nasty underhand campaigning for the Conservatives, against the SNP and Labour, by someone who is supposed to be politically neutral and especially to take no part in election campaigns. But memos of this kind have a wide circulation. I doubt very much if the person responsible will be tracked down.

[See “A Very Caledonian Coup” on “a vengeful and frightened Brit state lashing out at its biggest threat”.] 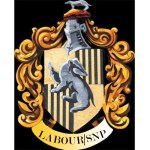 Let’s be clear; Labour and the SNP are now very similar political parties. They’re both running on a more-or-less progressive set of policies: Labour has been veering rightward, supporting austerity and the Tory attacks on the welfare state, making covertly racist comments about immigration, hoping to pick up right-wing votes: the SNP have been publicly flourishing their left-wing credentials, opposing austerity and the welfare cuts, making overtly anti-racist comments in support of immigration, hoping to pick up left-wing votes: for the SNP the left-wing vote is to be courted and won from Labour, whereas for Labour, the left-wing vote can in most constituencies be taken for granted, and right-wing voters need to be courted and won with promises of Labour’s support. But both parties have a very similar set of policies, when compared to the Conservatives or UKIP.

(The SNP has several advantages over Labour with regard to immigration. First of all, that the SNP made a decision decades ago that they would define as Scottish anyone born or living in Scotland who wanted to identify themselves as Scottish, regardless of the colour of their skin or their religion or their country of origin. Anas Sarwar is a Scot: any racist comment implying that he wasn’t “really” Scottish would get short shrift from the SNP as a local and a national level. Second, and almost as important: immigration, refugee policy, asylum – these are all matters reserved to the Home Office, so the SNP can say what they like, because they have no effect on policy. Third, there is no temptation in a Scottish constituency to court the UKIP or BNP vote, because it doesn’t exist in any effective numbers. Fourth, the EU is rather more popular in Scotland than in England.)

I think the UK Labour party certainly should learn they need to court left-wing voters, they need to oppose Conservative attacks on the poorest and most vulnerable, they need to emphatically support trade unions, they should never indulge the racists who want to believe that unemployment and low wages and homelessness are all the fault of immigrants. I hope – though without much confidence – that losing 40+ seats to a party that is not afraid of openly courting left-wing voters, the SNP, will teach Labour a valuable lesson for 2020.

That’s for the future: we’ll see what happens after 7th May.

What’s sure, with weeks to go, is that the Conservatives are going to run a dirty campaign taking all the advantage they can of Labour’s hatred of the SNP. We’ve just seen an example, and Scottish Labour fell for it. Will they be more wary next time?

Nicola Sturgeon gets the last word:

In the meantime, I repeat my challenge to Ed Miliband: if together our parties have the numbers required after 7 May, and regardless of which is the biggest party, will he and Labour join with us in locking David Cameron out of Downing Street?