The threat of Nicola Sturgeon 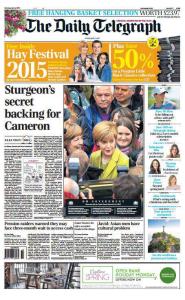 Nicola Sturgeon is – as we know in Scotland – an experienced, able politician, with ten years experience as the leader of the Opposition, as the Deputy First Minister, and now as the First Minister, in Holyrood.

A Yougov panel of undecided voters failed to recognise Nicola Sturgeon at all when shown her photo in advance of the leaders’ debate on 2nd April: but after the leaders’ debate, Sturgeon was topping UK-wide polls, her results comparable to those for Miliband and Cameron.

Nicola Sturgeon spoke as older voters will remember Labour politicians once speaking – of an economy that should support the people, against people being ground up by austerity to “support the economy”, of concern for immigrants and asylum seekers as human beings. Ed Miliband and David Cameron both looked scripted: Miliband constantly turned to speak to “you at home”, not to the audience or to his six fellow debaters: Cameron seemed to have a checklist of things he’d been told to repeat when he was stuck for answer, and he was stuck for an answer a lot.

The Conservative propaganda until now had presented Alex Salmond as the Scottish leader to be afraid of – when, at the moment, Salmond is not an MP.

In a story published last night for the Saturday morning front page, the Telegraph swings into action, backed up with suspicious promptness by Scottish Labour. [Note: apparently both Labour and the LibDems were asked to comment on the story before publication, hence Labour’s promptness in responding once published.]

EXCLUSIVE by me and @peterdominiczak Sturgeon tells senior diplomat she wants Cameron to "remain" in Downing Street http://t.co/FZmhsXuwvc

The Telegraph had obtained – from somewhere, one would hesitate to assume a government minister – a confidential memo dated Friday 6 March, written by a senior British civil servant about a conversation they had had with Pierre-Alain Coffinier, the French Consul-General in Edinburgh and Glasgow, which mentions at the end a conversation that Nicola Sturgeon had on Thursday with Sylvie Bermann, the new French Ambassador:

The Ambassador also had a truncated meeting with the FM (FM running late after a busy Thursday…). Discussion appears to have focused mainly on the political situation, with the FM stating that she wouldn’t want a formal coalition with Labour; that the SNP would almost certainly have a large number of seats; that she had no idea ‘what kind of mischief’ Alex Salmond would get up to; and confessed that she’d rather see David Cameron remain as PM (and didn’t see Ed Miliband as PM material). I have to admit that I’m not sure that the FM’s tongue would be quite so loose on that kind of thing in a meeting like that, so it might well be a case of something being lost in translation.

And indeed, Scottish Labour reacted fast. The story was officially released at quarter to ten on Friday night. Within an hour, at 10:39pm, they’d tweeted an infogram depicting Nicola Sturgeon and claiming: “She’d rather see David Cameron remain as PM”. At 10:53pm, just over an hour later, their social media department had been able to produce a vine for Twitter quoting words from the story overlaid with a shot of Cameron and Sturgeon shaking hands outside Downing Street.

Neither Nicola Sturgeon nor Pierre-Alain Coffinier were contacted for any comment on the story before it was released. Nicola Sturgeon categorically denies saying anything of the kind to Sylvie Bermann, and there is no official record of her doing so either in her own office notes nor in the notes made by Coffinier of their conversation.

It would be unsurprising, let’s be clear, if Sturgeon had expressed what many people have been saying for years: that Ed Miliband did not appear to be Prime Minister material. It would be unsurprising if Sturgeon acknowledged what’s perfectly true: the Tories in government in Westminster have been a boost to the SNP and their campaign for independence: Yes voters talked of using their vote in the referendum to kick the Tories out. To say this has been true of the past five years is stating the obvious – to go from that to clam Sturgeon said she’d rather Cameron won on 7th May is not backed up by any of the witnesses to the conversation.

The LibDems put the Tories into government in 2010: the LibDems have died as a party in Scotland. They may resurrect themselves at some future time, but every poll and every election – Holyrood, local authority, and Westminster – shows them losing seats.

There is only one LibDem MP likely to retain his seat in Scotland after 7th May: the Orkney and Shetlands LibDem candidate, Alistair Carmichael. All the others are probably going to lose their seats to SNP candidates. Nick Clegg may have shone in the leaders’ debates of 2010, but five years later his pontificating about what the LibDems would do in government merely looked like shoddy hypocrisy, after he had led his MPs to vote obediently for Tory policy over the past five years.

The scenario everyone who follows the polls can see is likeliest: whether Labour or the Tories are the largest single party, Labour and the SNP can outvote any multi-party coalition the Tories could possibly claw together. The scenario the LibDems were hoping for was another hung Parliament where they could choose to go into government with either Conservatives or Labour. The rise of the SNP has scuppered that plan: even if the LibDems keep more MPs than polling currently indicates, LibDems and Tories together won’t be able to outvote Labour and the SNP.

Who leaked the memo?

The Telegraph claimed that the allegation was contained in a leaked UK government memorandum, thought to come from the Foreign Office, which sets out an official account of the meeting from France’s experienced consul general in Edinburgh, Pierre-Alain Coffinier.

But Coffinier told the Guardian that this was untrue. He said he had checked his notes of that meeting, which took place at Holyrood after first minister’s questions on 26 February. “I have looked at my notes and absolutely no preference has been expressed by anyone regarding the outcome of the election,” he said. “Which suggests neither Nicola nor my ambassador said anything.”

The leaked document was drafted by a Whitehall official after Coffinier called the FCO, as protocol requires, to pass on a confidential account of several of the ambassador’s meetings in Edinburgh, which included a meeting with Alistair Carmichael, the Scottish secretary.

Both the story in the Telegraph and the Scottish Labour reaction show that Conservatives and Labour understand perfectly that Nicola Sturgeon and the SNP could not possibly afford to support the Tories into government after 7th May: they are attempting, with this piece of propaganda, to spin it to make it look as if Sturgeon would do that knowing how damaging that would be if it were believed.

It is, let’s admit, annoying for Labour to realise that people will be voting SNP in Scotland, unseating MPs in seats regarded as safe for Labour for generations, while depending on voters in England voting in enough Labour MPs to displace the Tories in government.

Is that a likely scenario? I wouldn’t have thought so. But Labour keep trying to claim that it is.

Who leaked the memo, and when did Scottish Labour learn about the Telegraph’s story?

[Answer, as upthread: the Telegraph contacted Labour and the LibDems for comment on their front-page story, but not the SNP or the Consul-General: so that Scottish Labour could be ready with their memes, but Nicola Sturgeon and the French authorities had to issue their contradiction after the story was published.]

Tim Fenton’s noted in his blog ZeloStreet that the memo itself could be just another Zinoviev Letter: the Telegraph offer no evidence of the leak:

This is the relevant part of the “memo” : “The Ambassador also had a truncated meeting with the FM (FM running late after a busy Thursday…). Discussion appears to have focused mainly on the political situation, with the FM stating that she wouldn’t want a formal coalition with Labour; that the SNP would almost certainly have a large number of seats; that she had no idea ‘what kind of mischief’ Alex Salmond would get up to; and confessed that she’d rather see David Cameron remain as PM (and didn’t see Ed Miliband as PM material)”. Does something smell just a little ripe here?

Not wanting a formal coalition is already known, as it the belief that the SNP will gain a number of Parliamentary seats. The Alex Salmond line is an outsider’s speculation – he and Ms Sturgeon work closely together – and the comments on Young Dave and Mil The Younger just happen to chime with what the Tel has been pushing for some time.