Police with guns on patrol? No. 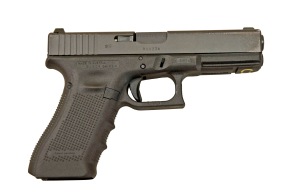 On a summer Saturday night in Inverness, a fight broke out between two men outside a fast-food restaurant, and three police officers turned up to stop the trouble.

All three policemen should have been unarmed: that’s the fundamental rule of British policing since 1829. Our police go unarmed except for a concealed truncheon. And that has been the rule for nearly two centuries: firearms are carried as an exception, only on specific occasions when a senior officer decides guns will be necessary.

But each of the three policemen who showed up to stop the fight in Inverness were carrying handguns, identified as Glock 17 semi-automatic pistols.

Police Scotland says that these officers – and 272 others – represent less than 2% of the total force, that armed police officers won’t routinely be patrolling the beat, and that

By having a small number of specialist armed officers available 24 hours a day, seven days a week, this means that if the need does arise, we are ready.

Apparently it is unthinkable that if a police officer trained to use a gun is called on to use the gun, the police officer might have to go to the police station – or even their car – and retrieve the gun. (I can see that in the Highlands, given the distances involved, it’s reasonable that a police officer may be allowed to keep their gun in a safe in their car rather than have to go to their police station to get the gun. The objection that the car might be stolen or raided for the gun would be met by having the gun and ammunition kept in separate locked safes within the car, impossible to access without the keycode.)

But what should be unthinkable is that the police could be allowed to put the lives of the public in hazard, and break down the tradition of policing by consent, by carrying firearms on routine patrol. Even trained and experienced officers make fatal mistakes, and the police can shoot to kill and know they don’t stand any risk of being convicted even of manslaughter – even when the killing is of a five-year-old boy asleep in bed.

In October 2013 the first Police Investigations and Review Commissioner for Scotland called for increased resources for his role: when the unified Police Scotland force was launched, the new Commissioner had their remit widened to cover investigations following deaths and use of weapons in addition to complaints about the police, and Professor John McNeil, the first Commissioner, reported

“In the run-up to 1 April it became apparent that there was an increase in the workload.

“Indeed, for the first six months of this year (April to September), there has been something like a 50 per cent increase in the number of complaints that I have been dealing with.

After the news broke about armed police officers on routine patrol, Police Scotland announced on 30th September that they would “review” their policy of having police officers carry guns.

A petition was launched on the 38 Degrees campaign site to disarm the Scottish police now, directed to the Chief Constable of Scotland, Stephen House, which rapidly got over 3000 signatures:

Until 2009, firearms officers had to keep their weapons in a locked safe and have a senior officer’s authorisation to take them. Firearms officers should revert back to this practice, because it is not necessary that they take their arms on routine patrol.

In 1993, Peter Waddington, now probably Britain’s most distinguished academic on policing, once himself a police constable, wrote in response to the murder of a London police officer:

Do our police, facing gun-toting drug dealers, pay the price of a historical legacy of minimum force? Probably not: the vast majority of the world’s police forces are armed and the murder of, and attacks on, the police vary enormously from one jurisdiction to another. It seems pretty clear that arming the police has little effect on their safety or on crime levels generally. The police are always vulnerable, no matter how heavily armed they are. The police must react to threat; the initiative, therefore, lies with the ‘bad guys’. The FBI estimates that, in 50 per cent of police murders in the United States, the officer does not have time even to draw his gun.

Throughout the world, whatever the present level of arming, officers seek enhanced weaponry. The Home Office has bowed to demands in this country to equip officers with longer truncheons. In other countries, officers demand ‘quick draw’ holsters and more powerful weapons and ammunition. In the US, the reliable six-shot revolver is being traded in for mechanically complex ‘semi-automatics’ that carry up to 18 rounds but are more difficult to use. This is despite evidence that, in most shootings involving the police, no more than three shots are fired. Recognising their vulnerability, police officers seek ‘the edge’, but they never have the edge, because they rarely have the initiative.

In September 2014, the Convention of Scottish Local Authorities (Cosla) affirmed their support for the principle, agreed to by all council leaders in Scotland, that “police officers should not carry firearms on regular duties” and noted that there is “no clear recourse for local government, or indeed Scottish government, to hold the chief constable to account” if there is dissatisfaction with this principle.

Our democratically-elected representatives cannot prevent Police Scotland from carrying firearms openly on routine patrol. You cannot use Write To Them to ask your MP, MSP, or local councillor to do more than protest this policy. The Chief Constable of Police Scotland, Stephen House, sets the policy and we can do nothing either to change this or to have him removed from his position. This is not policing by consent: we don’t have any means to consent or to refuse this policy. Holyrood’s Justice Sub-Committee on Policing has been looking at the issue of armed police, but it appears they have primarily taken evidence from the police and the SPA, not from members of the public.

Professor Waddington said in 1993 – and has re-affirmed this since:

Genuine protection is not offered by weaponry, but by the conditions in which the police carry out their task. Instead of arming the police, we should attend to how order and justice can be maintained and enhanced.

Surveys have tended to show that majority support can be found for police officers carrying guns – most white people never suppose it could be themselves or their family to be killed by the police – but that the police themselves don’t want to be carrying guns. A police officer, asked in 2006 if he would carry a gun, said he would if the decision was made, but he doubted it would ever happen and that he didn’t see the need:

“I was previously injured badly in an assault. My colleague and I feared for our lives – thankfully other officers came to our aid. I don’t think a gun – or a Taser for that matter – would have helped us in that situation. Communication is one of the best tools, and to be honest, having a gun could make an officer feel over-confident.”

The second meeting of the Justice Sub-Committee on Policing will be held on Thursday 5th February 2015: members of the committee are John Finnie, Alison McInnes, Margaret Mitchell, Graeme Pearson, and Kevin Stewart: the convenor is Christine Grahame. All committee meetings at the Scottish Parliament are open to members of the public and broadcast on Parliament TV.

2 responses to “Police with guns on patrol? No.”