Recently, there was a kerfuffle in the Better Together / Yes Scotland camps about would prices rise at Tesco in the event of Scottish independence. Better Together had published a leaflet saying they would: Tesco’s bounced in to say prices would stay the same: Yes Scotland publicised this triumphantly.

How do prices stay cheap in the big supermarkets while maximising their profits? 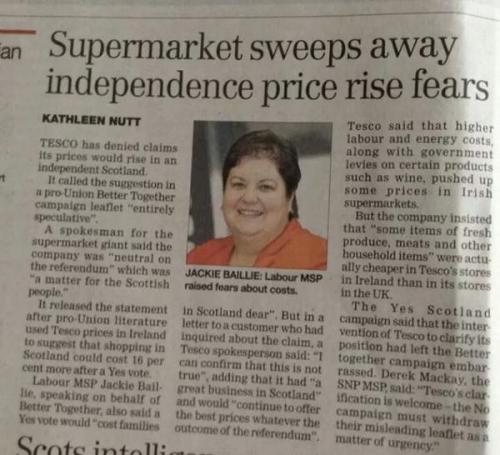 First of all, supermarkets cut costs and create profits by exercising their buying power against individual producers. Farmers have gone bankrupt because they accepted a supermarket contract. Dairy farmers see the price paid by supermarkets for their milk go down and down – pushing the arrival of US-style battery farms with huge numbers of cows kept continually in stalls. Not just food producers: all supermarket suppliers are pushed to make cuts.

Secondly, supermarkets give you the impression of bargains – two for the price of one, 40% extra free – while, as far as they can, cutting out all competition. If you have no choice but to go to the local big supermarket because there are no small independent shops left within walking distance, you may find your monthly bill going up and up regardless – even though the supermarket blandly assures you that they are providing you with all the bargains. Council planning permission is often granted to supermarkets without any consideration for the impact of a supermarket on local shops – and in some instances, without the supermarket even asking for planning permission.

Thirdly, of course, supermarkets take advantage of the Work Programme and “apprenticeship” schemes to cut staff costs by getting grants from the DWP to have people work for them for free or well below legal minimum wage. 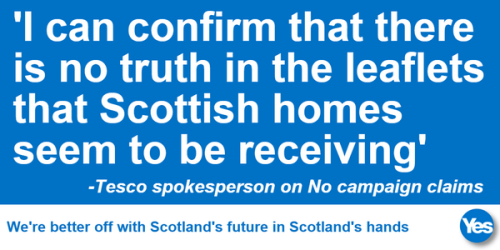 Fourthly, supermarkets pay even their regular staff poor wages, insufficient to live on – while Tesco’s CEO gets £6.9 million a year.

And finally, supermarkets dodge taxes as they can.

If Yes gets the majority on 18th September, and the SNP and the Tories promptly take us into currency union, Westminster and the Bank of England will ensure with fiscal controls on Scottish government spending that nothing much changes in iScotland: Tesco prices will doubtless remain the same as in rUK for much the same reason. Scotland won’t really be independent. That seems the most likely result of a Yes majority given lack of opposition to currency union within the Yes movement, but:

If currency union is avoided and Scotland’s policies can change – if, for example, Scotland’s small independent businesses are protected against unfair price cutting by supermarket wars: if council planning permission becomes targeted to preserving local communities rather than blasting them down with big-box supermarkets: if the Work Programme were banned in Scotland and employers required to pay all their employees at least minimum wage, if the minimum wage rate were raised so that someone in full-time employment could earn a living wage, if the Scottish economy improved so that fewer people were out of work: if big corporations had their tax dodging policed like the DWP polices benefit claimants now – if all of these things, which I think would be a good result of an independent Scotland – then yes, prices in Tesco would go up, but even so, most people would still be better off. 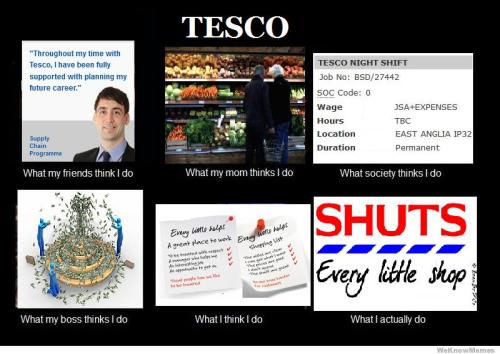 But that’s not what Yes Scotland seemed to care about….

Filed under About Food, Supermarkets

One response to “Cheap food at Tesco’s”