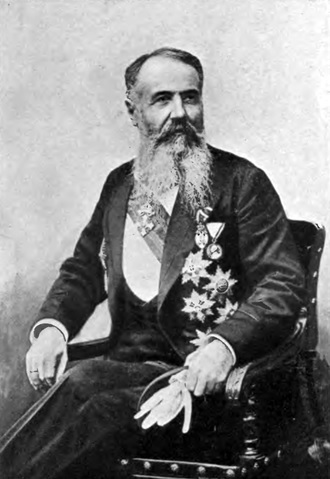 The Vienna Press asserts that the magisterial enquiry has already shown that the Serajevo outrage was prepared at Belgrade; further, that the whole conspiracy in its wider issues was organised at Belgrade among youth inspired with the Great Serbian idea, and that the Belgrade Press is exciting public opinion by publishing articles about the intolerable conditions prevailing in Bosnia. Press articles of this kind, according to the Vienna Press, are exercising a strong influence, as Serbian newspapers are being smuggled in large quantities into Bosnia.

Under the terrible shock of yesterday’s catastrophe it is difficult for me to give any satisfactory judgment on the bloody drama of Serajevo with the necessary composure and judicial calm. I must ask you, therefore, to allow me for the moment to limit myself to putting on record certain facts.

Yesterday, the 15/28, the anniversary of the battle of the Amselfeld, was celebrated with greater ceremony than usual, and there were celebrations in honour of the Servian patriot, Milos Obilic, who, in 1389 with two companions treacherously stabbed the victorious Murad.

Among all Servians, Obilic is regarded as the national hero. In place of the Turks, however, we are now looked on as the hereditary enemy, thanks to the propaganda which has been nourished under the aegis of the Royal Government and the agitation which has for many years been carried on in the press.

A repetition of the drama on the field of Kossovo seems, therefore, to have hovered before the minds of the three young criminals of Serajevo, Princip, Cabrinovic and the third person still unknown, who also threw a bomb. They also shot down an innocent woman, and may therefore think that they have surpassed their model.

For many years hatred against the Monarchy has been sown in Servia. The crop has sprung up and the harvest is murder.

The news arrived at about 5 o’clock; the Servian Government at about 10 o’clock caused the Obilic festivities to be officially stopped. They continued, however, unofficially for a considerable time after it was dark. The accounts of eye-witnesses say that people fell into one another’s arms in delight, and remarks were heard, such as: “It serves them right, we have been expecting this for a long time,” or “This is revenge for the annexation.“

The Archduke Franz Ferdinand of Austria, nephew of the aged emperor and heir to the throne, was assassinated in the streets of Sarajevo, the Bosnian capital, yesterday afternoon. His wife, the Duchess of Hohenberg, was killed by the same assassin. Some reports say the duchess was deliberately shielding her husband from the second shot when she was killed. One victim was struck in the body and the other in the face; the telegrams are contradictory about which wound the archduke suffered and which his wife.

Two attempts were made on the archduke’s life during the day. He was in Bosnia directing the manoeuvres of the Austrian Army Corps stationed in the province, and had devoted yesterday to a procession through the capital. During the morning a bomb was thrown at the imperial motor-car, but its occupants escaped unhurt.

In the afternoon in another part of the town a Serb student fired a revolver at the car, killing both the archduke and the archduchess.

Bosnia and Herzegovina have been in Austrian occupation since 1878, when the Treaty of Berlin authorised the dual monarchy to hold the two provinces. In 1908 Austria, without consulting the other parties to the treaty, annexed the occupied territory. Austria-Hungary is, as a result of territorial divisions and constitutional differences, ruled partly by the Germans and partly by the Magyars. The Slavs, who are a great majority of the people, numbering 22,500,000 against 11,000,000 Germans and 9,000,000 Magyars, remain indignantly hostile to such a political system.

Sarajevo, 6pm: The assassin of the archduke and his wife is a student named Gavrilo Prinzip. He is 19 and was born at Grahovo, in the district of Livno. He studied for some time in Belgrade. Prinzip declared he had intended for a long time to kill some eminent personage from nationalist motives. He made his attempt where the car had to slacken speed when turning into Francis Joseph Strasse. As the duchess was in the car he hesitated, but afterwards quickly fired two shots. The archduke was regarded in certain Serbian quarters as one of the greatest opponents of the pan-Serbian movement.

Filed under World War I