This morning, the newly-elected Londoner who’s the Scottish UKIP MEP, announced that he was kicking off what he calls the UKIP Scotland Naw campaign with a big idea.

He intends to demand that all Scottish Armed Forces members serving outside Scotland must get a postal vote. 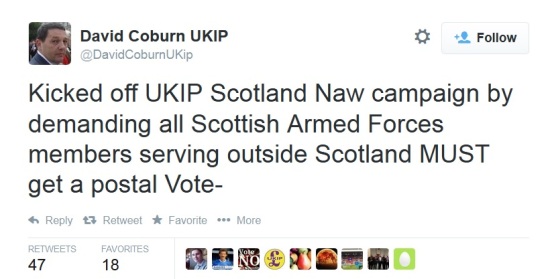 (I’ve just spent a few minutes trying to work out what “UKIP Scotland Naw” is saying. “UKIP Scotland Now”, mis-spelled? “UKIP Scotland No”? Is he saying that UKIP’s message is “No to Scotland”? Wasn’t he aware that the campaign for a “No” vote in the referendum isn’t called “No Scotland” or “Scotland No”, it’s called “Better Together”? Oh well. I guess that’s what you get for being parachuted into Scottish politics after twenty years in Kensington.)

Of course, anyone can apply for a postal vote. In Scotland, you don’t even have to give a reason, just make sure your application form gets to the registrar at least ten working days before the election, because postal vote forms are sent out a week before the election date. If a soldier is in Afghanistan or Australia, this isn’t necessarily the most convenient way to vote, which is why the Electoral Commission allows that if you are a member of the Armed Forces serving overseas, you can apply for either a postal vote or a proxy vote.

Proxy votes are only allowed when there’s a specific reason, and being in the military and posted overseas is one of the allowable reasons. If you have someone you trust to vote on your behalf in your home constituency, a proxy vote is more convenient and more reliable than a postal vote.

All of this David Coburn would know, if he had looked it up on the Electoral Commission’s helpful website About My Vote:

To insist that members of the armed forces must get a postal vote for the referendum would be to override their expressed wishes in many cases (Scottish members of the armed forces stationed in England and Wales or in the EU can opt to register to vote either where they’re stationed or where their home is: just as David Coburn can register to vote either where he’s stationed in Edinburgh or at his home address in Kensington).

More importantly, David Coburn’s big idea would remove the option of choice between postal and proxy voting: service personnel who are likely to be serving overseas at the time of an election or referendum can register as “service voters” for five years, so that they always have the option of getting either a postal or a proxy vote.

I think there should be a new verb. “To Coburn”: to campaign loudly for a right already available.

It seems possible that David Coburn is basing his big idea for UKIP Scotland Naw on a Telegraph article from May last year, which claimed that many Scottish servicepeople would struggle to cast a vote in the independence referendum. 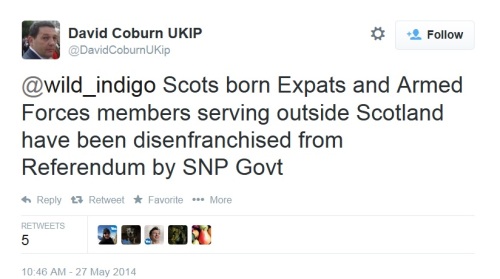 The Telegraph article is out of date – arrangements were made in the Referendum Act for the children of service personnel who will be 16/17 by 18th September to register for a vote if they are eligible – but the plain fact about the Scottish referendum is that it is based on the Scottish electoral roll: to be able to vote in the referendum, you must register to vote in Scotland by 2nd September 2014.

About My Vote answers the question: How can I help other people to participate in the referendum?

If you want to raise awareness of how to register and vote at the referendum then you can download and use our free resources to help you do this. Our posters and website banners can be used to promote and encourage electoral registration and our accurate and impartial factsheets and FAQs can be used to explain the voting process. For a full list of available resources, click here.

Honestly, it’s a great website. There was one big fail over the issue of EU citizens having the right to vote, but in general, I heartily recommend it to David Coburn, or anyone else confused about the process of registering to vote or running for election.

One response to “David is Coburning”