Should the Euro Elections be declared invalid? 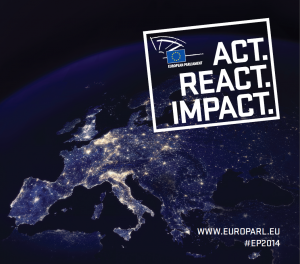 Have you heard of form UC1?

You’re not alone if you haven’t – the Electoral Commission makes no mention of it on its About My Vote website except as an “additional form”. UC1 is a form that EU citizens from outside the UK / the Republic of Ireland, have to fill in if they want to be able to vote in EU elections in the UK. It’s brand new – it seems to have been decided that this additional bureaucratic stumbling block was necessary sometime last year.

EU citizens who register to vote in the UK can’t vote in parliamentary elections, but they can vote for local councils and in EU elections if they’ve opted to vote in the UK rather than in their home country. It’s unlawful to register in two locations and vote twice, but it’s unlawful for anyone to do that, and UK citizens don’t have to fill in a separate form saying “I haven’t registered twice and I won’t vote twice” in order to be allowed to vote. 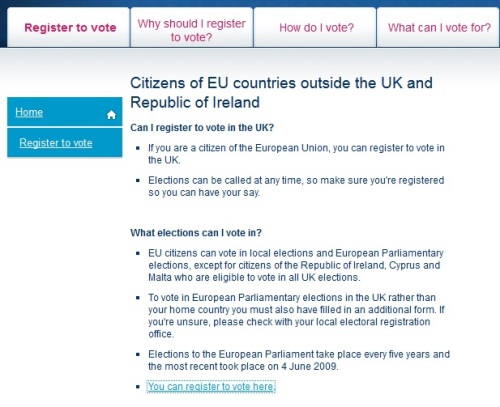 The UC1 form is available on the Electoral Commission website as a PDF – it has to be downloaded, printed out, and returned to the appropriate office. You cannot fill it in online.

You can fill in the electoral registration form online at the About My Vote website, though you must then print it out in order to sign it. The electoral registration form makes no mention of any “additional form” which must be filled in if you are an EU citizen who wants to vote in EU elections: it asks for your nationality, but does not then warn you that if your nationality is French – for example – you will have to fill in another form in order to be able to vote. 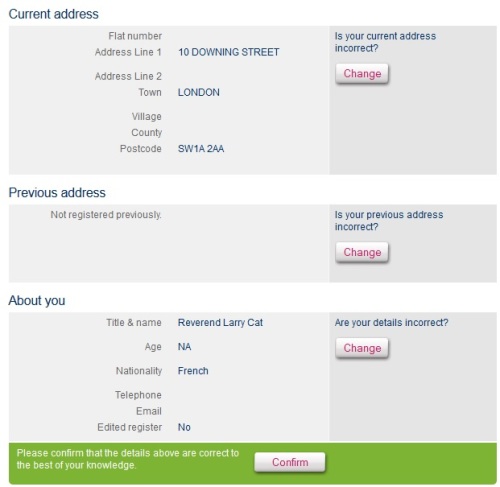 My father was in hospital recently, and as it became clear that he might not be able to get to a polling station, I helped him fill in a proxy vote form. My mother can now vote on his behalf if he’s unable to leave the house. We decided this was better than a postal vote, because a proxy can be appointed indefinitely in my dad’s circumstances, so if he was not well enough to go out at the independence referendum, or the general election next year, he could decide how he wanted to vote and tell his wife how to use his proxy, without further bureaucratic intervention. But if he was feeling well enough to get to the polling station, he could vote as he usually does, and his proxy would be unused. As it explains on the form, while it is possible for someone who’s registered for a proxy vote to vote twice, it’s unlawful to do so.

My dad did not have to fill in an additional form to notify the Electoral Commission that he understood that he wasn’t allowed to use his proxy to vote twice. My mother didn’t have to fill in any forms at all to be able to act as her husband’s proxy.

So why has this new form been created for EU citizens, effectively for no other purpose than to inform the Electoral Commission that they understand the law and they promise they’ll obey it?

Anna Feruglio Dal Dan, an Italian resident in London for many years, was aware the new “additional form” existed but her local council (Brent) doesn’t have any information about UC1 on its website. She wrote:

I am sorry but I am starting to feel a bit triggered by all the posts encouraging people to vote because if they don’t the fascists will get in or some other horrible things that is our fault.

I did not vote for the European Election. I very much wanted to, but unlike Italy, where you have a RIGHT to vote and it’s the State business to make sure you can exercise that right, in the UK you only have the right to ask nicely if you can vote, with plenty of advance, and if you miss the deadline, you can’t, tough titty.

I was very sick for the whole of May so I missed the deadline. I am spitting angry about this. I feel I have been robbed of my democratic right, and frankly I do not appreciate being told by all my Facebook friends that I am scum on top of it.

The first I heard of it was when a German friend studying at Edinburgh University, posted on Facebook the morning of 22nd May:

I just tried to vote and have been told that EU citizens aren’t allowed to vote in these elections, which simply isn’t true. Have any other EU folk in Edinburgh had the same problem?

My first thought was that he wasn’t registered. (I regret to say that I have encountered several British students who didn’t realise that they had to get registered to vote where they live, that if they were registered at their parents’ address this would mean they had to vote in their parents’ constitutency.) But he made clear that he was on the electoral rolls and had received a polling card; he simply wasn’t allowed to vote.

As the day wore on, it became clear this was a UK-wide snafu.

My wife (who is very much able to speak for herself but who doesn’t blog or tweet) is German, but has lived and worked and been on the electoral roll in Bradford since 1985. She is not allowed to vote in UK national elections but, like all UK EU residents, is allowed to vote (and has always voted) in local and in European elections.

On this occasion, my daughter, my wife, and I turned up at our local polling station with the cards they send you through the post. My daughter and I were handed voting slips for the EU election and for the local election. My wife was handed only a voting slip for the local election and told that she couldn’t vote in the EU election. Even when we protested – and pointed out that she was an EU citizen and therefore allowed to vote in EU elections – they stuck to their guns. “There’s a ‘G’ against her name” they insisted. “Yes, that stands for ‘German’. Germany is in the EU, and EU citizens are entitled to vote in European Elections.” we patiently explained. “Yes but our rules say that ‘Gs’ aren’t allowed to vote in EU elections” they responded; “We don’t write the rules, we just have to follow them.” they added helpfully.

In Lambeth, Guilherme Rosa (Portugese, elected on Thursday as a Labour councillor) only discovered on 22nd May that he’d been disenfranchised in the Euro Elections

“Why do foreign European local residents have to deliberately opt in to vote here and send a form instead of the more logical choice of opting in to vote in their country of origin [if they wish]?” he asked. “The system is so complicated that even I struggled to understand.”

He said that he returned various forms as requested but still was not allowed to vote and claimed it was a deliberate attempt to exclude voters. “When I turned up to vote, I was told I could vote in the local elections but not the European. This has to be a deliberate attempt to exclude people who would, mostly, have voted for parties which are not against immigrants. I know the same thing happened to many people. The system is broken. We should have the same rights as British nationals in these elections, but we don’t.”

Alex Andreu, born in Greece and resident in London, tweeted at five past nine on Thursday evening – 55 minutes before the polls closed:

A disturbing pattern emerging of Non-Brit EU folks not allowed to vote in Euro Elections. Let me know if this happened to you. Please RT.

He created a Storify of the tweets he received:

When I went to vote earlier I was only given a ballot for the local election. When I queried this, I was told that there was an additional form I had not returned. I received no such form. On the contrary I received a letter listing the names in my household and their nationality and told that if this was correct I needed to do nothing further. I thought this was just me, until I started digging about it on twitter. Here are the disturbing reports.

There have been reports of citizens being refused a ballot paper at polling stations in various locations around the country, despite being on the electoral roll, and even cases of people being told by electoral officials to ‘go and vote in their own country’.

Irrespective of these serious individual reports, it seems to me – as a candidate who has worked hard to reach out to non-UK EU voters at these elections – that the registration procedures themselves are seriously inadequate.

The UC1 form which citizens of other EU countries were required to fill in represents an additional hurdle in the registration process which does not apply to British [or Irish] citizens. It was also very unclear from the aboutmyvote website that EU nationals actually needed to return this additional form. Finally, translated versions of the form were not always available (for example a Polish version).

The point about translations is key and serious. There are 24 official languages in the EU. The UC1 form isn’t very long. There is absolutely no reason for the Electoral Commission not to have ensured it had been translated into at least 22 of the other languages of the European Union – Bulgarian, Croatian, Czech, Danish, Dutch, Estonian, Finnish, French, German, Greek, Hungarian, Italian, Latvian, Lithuanian, Maltese, Polish, Portuguese, Romanian, Slovak, Slovene, Spanish, and Swedish – unless the only reason for this form was to make it difficult for citizens of these countries to vote.

We won’t know the exact figures til Sunday or Monday, but EuroElections in the UK tend to a very low turnout. It’s estimated by polling figures that UKIP did frighteningly well.

What group of voters is least likely to vote for UKIP?

The EU citizens legally resident in the UK.

What group of voters appear to have been systematically denied their right to vote in the Euro Elections?

The EU citizens legally resident in the UK.

You can contact the Electoral Commission here. Whether or not the number of registered voters denied their right to vote is large enough to justify declaring the election invalid: whether or not this turns out to be a huge bureaucratic snafu, someone made the decision to create form UC1: someone made the decision not to bother having it translated into all EU official languages: someone decided not to add a link to UC1 at the About My Vote website or at the online voter registration form: and local authorities all over the country knew that specific registered voters had a new form they had to fill in to allow them to vote at the time they sent out the polling cards, and did nothing to ensure that those voters would know that they had to fill out a new form in order to be able to vote – only to make sure that the polling station workers would prevent them from voting.

An independent investigation must be carried out, and soon. Who made these decisions?

I don’t think we need to ask why.

10 responses to “Should the Euro Elections be declared invalid?”