Reeva Steenkamp’s death is not a bet

Just over a year ago – on 14th February 2013 – Oscar Pistorius fired shots through his bathroom door, which struck and killed Reeva Steenkamp.

Outside South Africa, most news stories focus on Oscar Pistorius: Reeva Steenkamp is generally referenced as “his girlfriend”.

Steenkamp was not famous outside of South Africa: the world’s media will be descending on the North Gauteng courthouse because of Pistorius’s fame.

At the centre of it all will be a case that has everything but a whodunit, since the Paralympian [apparently you stop being an Olympian when on trial for murder] has already admitted shooting dead his girlfriend, the model Reeva Steenkamp, at his home in the capital, Pretoria, on 14 February last year. At issue is whether he intended to kill her, which could see him jailed for at least 25 years or, as he contends, mistook her for an intruder and fired four times in self-defence through a locked toilet door.

During the trial Pistorius, 27, will call on at least four forensic scientists, and has hired a US forensic animation firm to digitally recreate the crime scene. He is understood to be funding his own defence without input from his family.

The day after the shooting, Rupert Murdoch’s Sun splashed a front cover picture of Reeva Steenkamp –

….pulling down the zip of a bikini top, even as her corpse was lying in a Pretoria morgue awaiting a postmortem.

Perhaps the most coldblooded response to Reeva Steenkamp’s death and Oscar Pistorius’s trial – beginning later today, 11am GMT (same time in South Africa as in the UK) – came from Paddy Power. Paddy Power is a gambling conglomerate – operating a chain of bricks-and-mortar betting offices in Ireland, and running an online website. Patrick Kennedy is the CEO, Nigel Northridge is the chairman, their revenue was 653.8 million euros (£539.29M) in 2012.

And they offer any sociopathic sporting gentleman the opportunity to bet on a premeditated murder charge -with a Money Back Special if Pistorius is found not guilty. 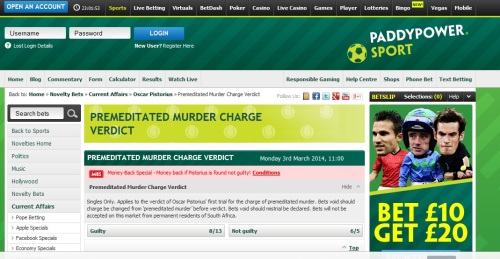 Yes. If you bet on the verdict – Pistorius guilty or not-guilty – bets are void, your money back, if the charge of premeditated murder is just dropped.

Pistorius’ wealth has bought him one thing however: a crack team of forensic, ballistic and legal experts who will fight to keep him from going to prison on the grounds that what happened in the early hours of St Valentine’s Day last year was, in his words, a “devastating accident”.

Among them are a pathologist who investigated the grizzly and suspicious death of a rival of President Robert Mugabe in Zimbabwe, and an American forensic animation firm called the Evidence Room which has been described by one commentator as “Pixar meets murder trial” for its ability to put together compelling video re-enactments of the key events.

With no eyewitnesses to what happened, said Professor Stephen Tuson, a criminal law expert at Wits University, there would be a “forensic battleground” between each side’s experts.

In the Counting Dead Woman project, Karen Ingala Smith wrote: “There are a lot of isolated incidents around“:

One of the reasons I started counting dead women was hearing a murder of a woman killed referred to as an ‘isolated incident’. Seven women were killed in the first three days of 2012 and yet connections between these occurrences of men’s fatal violence against women were absent. It’s little over two years and 275 dead women later, and police are still describing men’s killings of women as isolated incidents.

And betting on the trial of the killer of Reeva Steenkamp is just another of those “isolated incidents”: not evidence at all that the people who run Paddy Power are sociopathically uninterested in the woman who got shot on Valentine’s Day last year.

@gossig That sounds amazing! Wow that's what it's all about! It should be a day of love for everyone 🙂 may it be blessed! 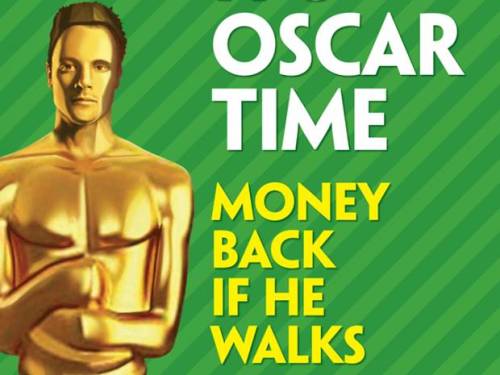 Update – Blogger Jean Hatchett has started a petition calling on Paddy Power to take that bet down and donate to charities fighting domestic violence.

In the Independent, I saw the poster “It’s Oscar Time”, which suggests Paddy Power meant something stronger – all bets voided and money back if Oscar Pistorius is acquitted.

One response to “Reeva Steenkamp’s death is not a bet”