What should the LibDems do after May 2015?

The next General Election for the UK will be on 7th May 2015. In Scotland, we’re all looking at 18th September 2014, but for the Westminster parties, the general election campaigning has already begun.

At the 2010 general election, the results were Conservatives 307, Labour 258, Liberal Democrats 57: the LibDems dashed into a coalition with the Tories, and the hugely unpleasant mess that followed is still miring us up.

It’s fair to say that without the LibDem decision to join the Tory party and keep them in government (despite Tories not having won an election since 1992) – there likely would not have been a majority-SNP government in Holyrood: conceivably, if enough Scots had voted LibDem in 2011, there might not be an independence referendum this year.

By the way, if you are gearing up for a “but what else could the LibDems have DONE?” the answer was obvious even in May 2010: the LibDems could have offered a confidence and supply arrangement to the Tories, weighing each proposal on its merits but promising to support them in the ordinary business of government and against no-confidence votes proposed by minority parties. This would have been ultimately much more advantageous for LibDem MPs, MSPs, and councillors, for the NHS in England, and of course for the poorest and most disadvantaged people who have been steadily under assault by the Tory government: but it would have had one huge disadvantage for Nick Clegg and the other LibDem party seniors – they wouldn’t have been in the Cabinet: they wouldn’t have had all the power and authority and status and the pay of Government Ministers. (And of course, they wouldn’t have got that all-important referendum on AV, which did their party so much good.)

At the 2015 election, electoral calculus estimates that the results are likely to be: Labour 364, Conservatives 235, LibDems 23 (and SNP and Plaid Cymru 9). No one can quite predict the effect of UKIP – or the independence referendum – but it’s fair to say that UKIP looks more likely to split the right-wing vote, ensuring, perhaps, a LibDem or even Labour MP in a constitutency where Conservative usually wins. So the LibDems might get a handful more seats that polling currently doesn’t allow them – but they certainly won’t get more than the ones they had in 2010, and it’s not likely they’ll get over 30. 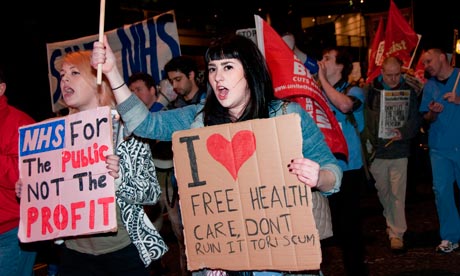 But, politics is politics and anything could happen: it’s possible that Labour could be in the same position as the Conservatives, largest single party but not able to get a majority. (Possible, but not plausible. I think a Yes victory in September is more likely than Labour not getting a majority in May 2015. Though that leads on to another thought: what if Labour’s majority is thin enough that the departure of the 41-or-however-many Scottish Labour MPs from Parliament on 1st May 2016 kills it? This is not likely either, but the LibDems may be thinking of this, too.)

Because what the LibDems are letting us know they’re wanting after May 2015, is Labour as the largest single party and themselves as coalition partners – back in government again, this time voting for Labour policies as obediently as they’re voting for the Tory policies now.

Liberal Democrat leader Nick Clegg has said he could work in partnership with Ed Miliband if “that is what the British people have told us to do”.

The deputy prime minister told Nick Robinson that he thought a coalition government was good for the country, rather than a single party governing and “messing things up again”.

The Liberal Democrats would accept Ed Balls in a Lib-Lab coalition cabinet at the next election, despite deep misgivings inside Nick Clegg’s party about the Shadow Chancellor’s ability to win the economic argument, party sources have told The Independent on Sunday.

Mr Balls had been seen as a “deal-breaker” in coalition negotiations between Ed Miliband and Mr Clegg if the 2015 election were to result in a hung parliament, but the Lib Dem leader is understood to want “policies not personalities” to decide any second coalition deal.

Nick Clegg will have to give the left-wing party president Tim Farron a job in a future coalition, Liberal Democrat sources said last night, amid further signs that the party is preparing for a deal with Labour.

Mr Farron, who is standing down from his job as president of the Lib Dems this year, is tipped to run for the party leadership if Mr Clegg stands down. He is likely to feature in a coalition with Labour after the 2015 election rather than retreat to the back benches, and Mr Clegg will be under pressure to accommodate him, given his strong support among party grassroots.

All of these quotes, always, come from LibDem sources. The LibDems want to push the idea that they’re coalition partners for Labour: that they’re not just the party that votes Tory when Cameron tells them to. The LibDems need a narrow Labour majority, one close enough that Labour might have to consider accepting their offer. Or, failing that, another election where Conservatives are the largest single party. Anything, any kind of election result, that means the LibDem leaders can be back in Cabinet, no matter which party they end up backing.

In a recent interview, Ed Balls said he had no reason to doubt Nick Clegg’s integrity.

He may be the only person in the UK who doesn’t.