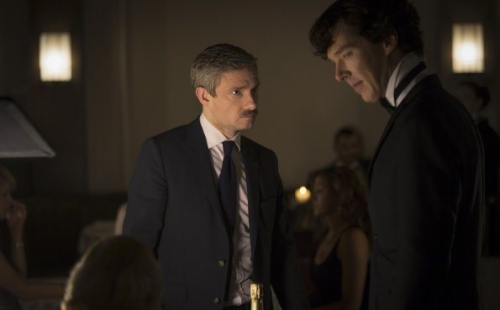 I wasn’t exactly disappointed by The Empty Hearse: though I was disappointed that Mark Gatiss ducked out of actually providing the answer to how Holmes did survive. (It’s possible that Gatiss will provide the answer in episodes 2 or 3, but I’m not counting on it.) But I’m looking forward to The Sign of Three.

Moving on to the actual plot – (spoilers follow) the bomb under the House of Commons – I saw on Facebook this morning someone ask the question: why not just let it blow? Ugly building, and there’s never very many MPs in the debating chamber anyway. (Before MI5 thinks they have to investigate: yes, it was as ironic a question as that Facebook group about Guy Fawkes.)

But even though the question was ironic, it misses the point that over 2000 people work in the building – civil servants, police, MP’s employees – and that even if the bomb threat had been called in, in time to evacuate the building, terrorist actions against inhabited buildings (or even uninhabited buildings) are always, obviously, wrong.

Still, running with the idea that this was an actual bomb plot, really directed against the Commons debating chamber when a debate was taking place: the culprit (we know from John Watson’s blog) was Lord Moran, Minister for Overseas Development. (For what it’s worth, this job title hasn’t existed in British politics since 1997: and Lord Moran exists, but in real life he is John Wilson, 2nd Baron Moran, a hereditary peer and a crossbencher, 89 years old – not a government minister nor likely to be.)

So, the fictional Lord Moran is a cabinet minister, not a Shadow Minister, and this tells us it was a terrorist plot aimed at the Commons from a Conservative peer. Given this is Sherlock, Lord Moran’s given name is most likely Sebastian: and he would have been appointed to the peerage as a former military officer, rank of Colonel. (And he probably cheats on his expenses, too.)

So, why would a Conservative peer want to blow up the House of Commons?

We’ll presumably find out later tonight in The Sign of Three or next week in His Last Vow, but speculating for the benefit of people saying thoughtlessly (and ironically, MI5: ironically) that this is a terrible government and a bomb is just what it needs, let’s consider.

Skip the next two paragraphs if you already know the MP numbers off by heart.

The current largest party in the House of Commons is the Conservatives, with 303 MPs. The LibDems are in coalition with the Conservatives and have 56 MPs, giving the government a 30+ majority, which is plenty to totally destroy the economy, wreck the welfare system, and privatise the NHS. The LibDem excuse for supporting the Tories is that before the 2010 General Election they said they’d support whichever party won most seats, and as that was the Tories…

In any case, Labour currently has 257 MPs: while technically Labour and LibDems together could outvote Tories, their coalition would not have got them past the House of Commons magic number of 326.

Fairly reliably, at byelections, the party in government tends to lose. There are exceptions to this rule, but a byelection voters have the chance to indicate strongly their dissatisfaction with government without having to think about how their vote could affect national government.

At the 2015 General Election, the polls are holding steady for a Labour majority without any need for coalition. The Conservative party, which hasn’t won an election since 1992, will be out of power again for another five years. Anything can change in politics, but short of some huge revolutionary event or an awfully well-timed military victory (Thatcher called a General Election as soon as possible after the Falklands War) the next government of the UK is going to be Labour, and assuming Labour doesn’t think it has to go on down the Tory track but starts to fix things, Labour will be more popular by the 2020 general election than the Tories and the Tories will then not have won a General Election for nearly 30 years.

Supposing, however, that there was a terrorist attack on the House of Commons with a bomb set that would destroy the Commons chamber more completely on the government side, during a debate where Lord Moran could be sure of at least 30 backbench Conservative MPs killed – ideally, and assuming fictional Lord Moran has access to the Conservative Chief Whip’s office, a debate with Conservative MPs in constituencies which are certain to go Labour in event of a byelection.

The obvious direct result of this is that, over the next few months, there would 30 fewer Conservative MPs (though likely some Labour and LibDem MPs would have been killed as well) and eventually, after 30+ byelections, Labour would be the largest party in the House of Commons, and could – with a coalition – form a government prior to the 2015 General Election.

The equally obvious result, and what I hypothesise fictional Lord Moran would have been aiming for if Sherlock Holmes hadn’t come back to life and caught him – is that the Conservatives would have blamed left-wing terrorists of trying to change the UK government by mass assassination.

The byelections would never have taken place. The Conservatives would have maintained their right was to continue in government even without a majority, rather than give way to terrorism.

And what else would they have done to people easily victimised as suspected enemies of the state?

Thank goodness for Sherlock Holmes. Glad the moustache is gone, too.