I meant this post to be a compilation of a few pleasant links to celebrate Christmas, but then I got a dose of norovirus for the solstice, and if you have ever had norovirus you will understand, but if you haven’t yet: I spent Sunday feeling like complete crap, and the next couple of days recovering.

My best gift to myself was remembering that oral rehydration therapy would both be good to drink and do me good:

ORT – simple solution of sugar and salt in water – is reckoned to be one of the biggest medical discoveries of the 20th century, which has probably saved more lives than any other. I wouldn’t have died of 24-hour norovirus: I am a strong healthy well-nourished adult. But people can die of prolonged vomiting/diarrhea due to dehydration and sodium depletion: and ORT both helps replenish fluid and the sugar solution helps the gut absorb the salt it’s losing. Although packets of ORT salts are manufactured under the supervision of WHO / UNICEF, anyone with access to water, sugar, and salt can mix up an ORT solution at home, and if you are even slightly dehydrated, it’s much safer to drink than plain water.

So, having cheered you all up: who’s going to watch The Bishop’s Wife? (BBC iPlayer til 30th December.)


I meant to direct you to some splendid Santa cakes, but it seems a bit late now. However, the wonderful Cakespy has some lovely Christmas cake recipes….

I wanted to link you again to Natalie Hayne’s “Who needs God, when you have the Muppet Christmas Carol?” and all year it’s seemed more worth hearing.

eventually realises that Christmas isn’t a day; it’s a state of mind. His final promise to the last spirit is a comprehensive one: “I will honour Christmas in my heart and try to keep it all the year. I will live in the past, the present and the future.”

It’s because of this that I see A Christmas Carol as a humanist text, in essence. Scrooge does go to church on Christmas Day after his night-time conversion from misanthrope to good man, but it takes up less than a sentence of the book. (And none of the film. Perhaps it’s for the best – the church might not approve of the marriage between pig and frog.)

Scrooge doesn’t find religion. He finds Christmas. And why should the qualities of generosity and thoughtfulness be the preserve of the God-fearing?

This year, David Cameron’s Christmas gift to the nation was a reading of The Night Before Christmas by Clement Clarke Moore:

The children were nestled all snug in their beds,
While visions of sugar-plums danced in their heads.
And mamma in her ‘kerchief, and I in my cap,
Had just settled our brains for a long winter’s nap.

Eighty thousand children are homeless this year, according to Shelter: 5000 of them in Scotland:

“The majority of the families were living together in one room, while in over half of the cases investigated, children were sharing beds with their parents or siblings.

“Two thirds of families said that their children had no table to eat meals on, and often had to eat on the floor or on the bed.”

Iain Duncan Smith refused to meet with the Trussell Trust to discuss the vast increase in demand for food banks, accusing them of scaremongering for publicity because they repeatedly link the growth of food banks with the Tory/LibDem reform of the welfare system. IDS wrote:

“I strongly refute this claim and would politely ask you to stop scaremongering in this way. I understand that a feature of your business model must require you to continuously achieve publicity, but I’m concerned that you are now seeking to do this by making your political opposition to welfare reform overtly clear.”

Nearly 30% of referrals to Trussell Trust foodbanks are because of “benefit delays”: according to official DWP figures, over half a million jobseekers had their benefits sanctioned between November 2012 and June 2013. 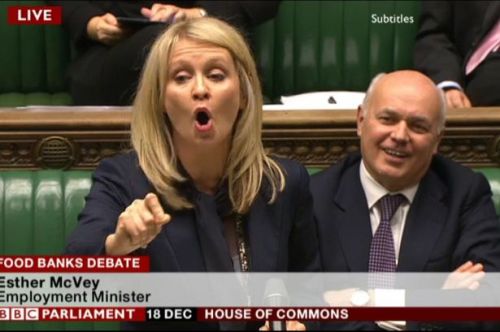 In the foodbanks debate in the House of Commons on 18th November, Iain Duncan Smith walked out after an hour – at 5:40, while Conservative MP Steve Rogers was speaking, but after his deputy, Esther McVey, had given the government’s case for foodbanks. (Briefly: the Tory/LibDem classic “It’s Labour’s fault” and the conservative-Christian classic: “it is positive; people are reaching out to support others in church groups, community groups, local supermarkets and other groups”.) Esther McVey also did not remain for the entire debate.

That’s a shame. Because he shouldn’t be annoyed: he should be humiliated. Thanks to the Tory/LibDem policy of cutting welfare support to the poorest and most vulnerable, and Iain Duncan Smith’s dishonesty and incompetence, food poverty in the UK may have reached public health emergency level already.

The terrible thought of David Cameron thinking he had fulfilled the Christmas spirit by reading The Night Before Christmas led me into all this homelessness and hunger facts and figures: but I much recommend Christopher Lee reading Tim Burton’s “The Nightmare Before Christmas”.

And on New Year’s Day, Sherlock’s back.

Filed under About Food, Benefits, Charles Dickens, Other stuff on the Internet I like