Rachel Reeves became Shadow Secretary of State for Work and Pensions on 7th October, Iain Duncan Smith’s new opposite number, replacing Liam Byrne. (She was Shadow Chief Secretary to the Treasury from 7th October 2011, and she’s been MP for Leeds West since May 2010.) Her first interview as IDS’s Shadow was published in the Observer late on Saturday night – and Twitter exploded. Blogs to read: Paul Bernal’s “Dear Rachel Reeves”; Mike Sivier’s “Sort out the tax dodgers, Labour, then the benefit bill won’t be a problem”; Jayne Linney “Oh Dear Rachel Reeves – You Got it Badly Wrong!!”.

But in the shouting and the tumult, a handful of people seemed genuinely bewildered as to the problem with what Rachel Reeves had said:

I am still unsure why ppl are so against the suggestion of @RachelReevesMP that people are found jobs for pay, if they cant find their own.

Who, on the left, wouldn't want more people in better paid jobs? Reaction to Reeves' benefits' comments seems a bit strange to me.

Neither Andrew Spooner nor Hossylass seem to have noticed that while Rachel Reeves is enthusiastic about forcing people into “compulsory jobs”, she’s said nothing about what kind of pay those compulsory jobs will get – and she’s made clear that if you are unwilling or unable to be forced, a Labour government will just let you starve homeless.

If you have been unemployed for a year or two, you are desperate. Read Jack Monroe’s speech to the Conservative party conference. You don’t need a kick in the face, you need a job. And there aren’t enough jobs going.

Well, say the comfortable people who’ve never been there, isn’t that what Rachel Reeves is offering?

Imagine this scenario, then. A woman of 23, with a child to support, loses her job. She can’t find work. After a year, she’s summoned to the Job Centre and told that from now on, she’ll be stacking shelves in Tescos, on whatever pay the DWP choose to give her. If the pay isn’t enough to cover childcare? If the job is too far away and there’s no public transport? If she’s applied to Tesco a dozen times for a paid job and been told there were no vacancies because they can get all the compulsory labour they want from the Job Centre, no cost to themselves? If she wanted to find part-time or flexible work so that she could spend time caring for her child? Tough, says Rachel Reeves: take the compulsory job or we’re done with you, you can die on the street for all we care.

That’s not an unusual scenario I’ve just outlined. That’s the reality of Reeves’ threat that Labour will be worse than the Conservatives if you’re in need:

“It is not an either/or question. We would be tougher [than the Conservatives]. If they don’t take it [the offer of a job] they will forfeit their benefit.”

You can’t solve unemployment by trying to force people into compulsory jobs funded for the employer by the government, under threat of destitution for the unemployed. When the Labour Party is being run by people who know no better than to propose this, the Labour Party is worthless.

Does she think MPs, who earn £66,000 a year, pay enough tax? “The focus should be on a privileged few right at the top, and that’s not people earning £50,000 or £60,000 a year. If you’re a single-earner family in the South East on [that income], you don’t feel particularly rich, and you’d be aggrieved that people earning between £150,000 and £1 million are getting a tax cut. We don’t have any plans or desire to increase tax on people in that band of income.”

The Conservative message, adopted by the LibDems for the past few years, and now embraced by Labour, is that being unemployed means you’re a bad character, idle and untrustworthy. (A person sentenced to jail for cheating on benefits could get a longer sentence than someone who’s convicted of child rape.)

So well has the message sunk in that unemployed people are bad hats that though Tory policies are aimed at all on benefits, working poor claiming benefits strive to make clear that they’re not like those people.

Rachel Reeves’ idea of kicking people out of the economy completely if they turn down a compulsory job is a savage attack on our humanity and on the economy. Reeves may think someone sitting on the street outside a supermarket begging because they have nowhere to live and nothing to live on is at least not a drain on the economy, but she’s wrong: every homeless beggar she wants to create will be an open wound.

The threat of destitution for the most vulnerable is the worst aspect of New Labour on welfare, but Rachel Reeves also chimes in with Iain Duncan Smith on the benefits cap: 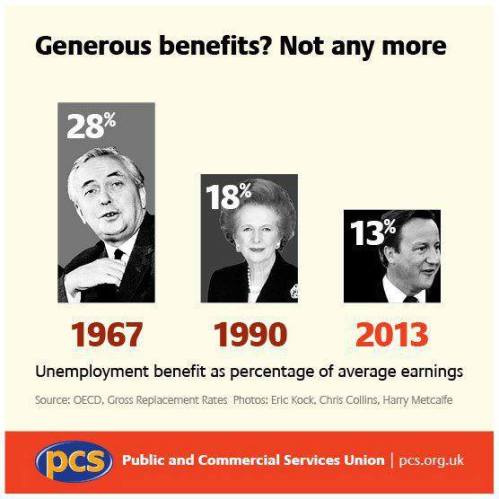 “I think it is right that those people who are in work do not feel that those who aren’t in work are getting something that they couldn’t dream of getting.”

To cut the housing benefit bill, it is necessary to ensure that anyone in need of a home can be allotted a council flat or council house to rent from the local authority, not from a private landlord. If decent basic accommodation is available at a low rent, this ensures private landlords have to lower their rents in order to get tenants. Whereas setting a benefits cap is merely ensuring that a family renting from a private landlord can lose their home due to defaulting on rent, and will have to be rehoused in emergency accommodation.

So, if Labour wants to cut the benefits bill, they need to build enough council houses for everyone who needs them. They’re not planning to do this.

There is a massive housing shortage. For many years we have built far fewer homes than we need. We should be building 250,000 homes per year just to meet newly arising need, let alone start tackling the backlog, but in England we’re currently delivering less than half that amount each year. This is fewer than in any peacetime year since the First World War. Even before the recession, when the economy was booming and credit was flowing, we didn’t build enough. The shortage of supply coupled with high demand drives up the cost of housing, putting an affordable home out of reach of many families. [July 2013]

Ed Miliband promises that by 2020, there will still be a shortfall of 50,000 fewer homes per year than could meet demand, and he has no plans to build enough new homes to deal with the backlog. Labour’s plans are evidently for the housing crisis to continue, just more slowly than it did under the Tories.

Nor does Ed Miliband promise that all of these 200,000 new homes will be council homes, rented from the local authority by families in need: which suggests strongly that Miliband intends to subsidise private landlords and housing associations.

A real commitment to making things better for people who are unemployed or struggling on a low income means repealing a lot of the hideously cruel legislation the Tories have passed in the last three years – and undoing a lot of the New Labour attitude that we thought was epitomised by Liam Byrne.

But from Rachel Reeves’ interview, it’s clear this is not the Liam Byrne line on being unemployed and working poor: it’s the Labour Party line. The Labour Party has decided it’s not worth standing up for the poorest and most vulnerable, in work or out of work: the thing to do is what the Tories and LibDems are doing, kick them while they’re down and make sure they can’t ever get up.

I’ve said that the best campaigners for voting Yes are Labour and LibDems and Conservatives, and this is exactly what I’m talking about. What is the point of voting No to Scottish independence when the party likely to be in government in Westminster in 2015 is talking like this?

From past experience, I’ll get Yes campaigners cheering and congratulating each other (or me) in the comments. But, for what it’s worth, I see this as a measure of their campaign’s failure. When Rachel Reeves is making the case for Scottish independence better than any Yes campaigner, your campaign has lost the argument even if it wins the vote: because when the only reason for voting Yes is the hopeless failure of all Westminster parties on the real needs of the country, that’s a horrible reason for Scottish independence.

3 responses to “Unemployment is not a sign of bad character”