Shouting in the street

Josh Williamson is from Brisbane, Australia: he now lives in Perth. Nothing wrong with that: Perth is nice. He’s the new pastor at the Craigie Reformed Baptist Church, induction speaker from Grace Baptist Partnership “Helping Christians Plant Churches”.

The Grace Baptist Partnership doesn’t think much of Scotland:

Those witnessing to urban Scots will be struck by the ‘No Religious Callers’ signs they see at people’s doors. The poor, living on rough housing schemes, refuse to answer. The rich live in apartments with secure entry systems. The elderly reside in care homes where matronly managers prohibit religious visits or literature. The young are predictably fearful of strangers. Many open their doors clutching a phone to their ear; too techno-connected to interface with a person. We live in an isolated society. 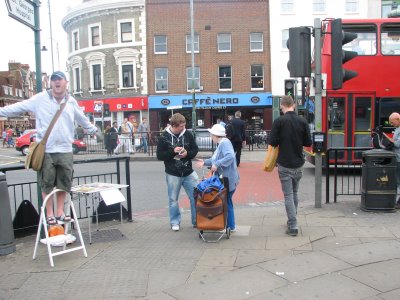 Josh Williamson’s an Overseer & President of the Brisbane organisation “Operation 513” which describes itself as an “Evangelism Action Group”, which appears to mean: they go out and shout at people in the street about their view of Christianity and their opinion of evolution and gay marriage.

So, having arrived in Perth, Josh Williamson went out and shouted at people in the street. You can see the enthusiastic reaction from the Scots he was shouting at. Eventually – you can hear this on the video – someone said that if he didn’t stop shouting they’d call the police. And they did. And the police asked him to quiet down, as they would anyone shouting in the street… and then when he wouldn’t quiet down, they arrested him.

And then a few days later Josh Williamson went out and shouted at people in the street some more. And then he was arrested again. Which, judging by his blog, he’s very happy about. And Rod Liddle at the Spectator’s got his back. And of course now Christian Concern is on his case to back his legal right to shout at people in Perth.

With all due respect for your right to freedom of speech and freedom of religion, let me give you some good Scots advice, Josh:

27 responses to “Shouting in the street”