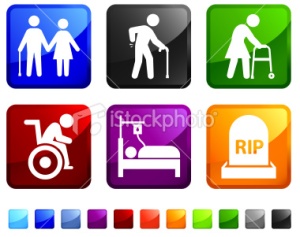 Everyone dies. Nothing’s sure but death and taxes.

In general, over decades of the NHS and welfare support and help for disabled people, people have been living longer. Since the first Coalition government spending review, cuts on spending have targeted the poor and disabled.

The DWP’s own figures say:

The prevalence of disability rises with age. Around 6 per cent of children are disabled, compared to 16 per cent of working age adults* and 45 per cent of adults over State Pension age in Great Britain.

Esther McVey, the minister for disabled people, told the Mail on Sunday in March this year that in her view many of the people receiving disability didn’t really need it:

“Only three per cent of people are born with a disability, the rest acquire it through accident or illness, but people come out of it. Thanks to medical advances, bodies heal.”

Mortality rates have been falling steadily for years. There was a blip upwards in 2003, but it was followed by a blip downwards in 2004 – no overall change in the general trend downwards. Since the beginning of 2012, mortality among older people has been rising steadily, and has continued to rise in 2013.

[Note: The government have since decided to ensure no further evidence is published that could evidence a general trend upward by abolishing the Public Health England reports.]

From a deaths tracking report by Public Health England:

“When we focus on mortality over 75, we observe rapidly increasing mortality for both males and females, presenting throughout 2012, and continuing into 2013.

“Female 12 month mortality over 75 is currently higher than in any year since 2009; and April 2013 saw a particularly sharp increase.”

While this could be caused by a number of factors (such as newly virulent viruses) – and won’t be regarded as a settled long-term trend unless the mortality rate continues to increase through 2013 and into 2014 – the analysis considered that in “Spearhead” local authority areas (the most-deprived fifth of local authority areas in England and Wales) female 75-plus mortality trends appear to have been worse than in the less-deprived areas, suggesting poverty rather than viruses. (The issue is considered by the ONS officials to be completely unrelated to the recent reports of hospital deaths.)

Though people with health-related problems sometimes recover, others have conditions that persist or intensify with age. Indeed, medical advances mean that some people who would have died survive, with impairments.

from the Health Service Journal:

The year 2012 is the first in which mortality has increased since 2003. At that time, the rise was followed by a marked reduction in deaths in 2004, rebalancing the long term trend in England of a fall in mortality and a rise in life expectancy.

However, the PHE report says that, more than halfway through 2013, there has been “if anything, a further deterioration in mortality compared with that observed” in the same period in 2012.

The report, dated 16 July and with figures up to 5 July, said deaths have fallen in the most recent week’s figures, but that in 2013 mortality remains notably high. It also said the Office for National Statistics’ projection of deaths between the middle of 2012 and 2013 was 455,000. A comparison with actual deaths shows that “deaths in England in 2012-13 were 23,400 (5 per cent) above ONS expectations”.

“Elevated mortality amongst the elderly… is often about people dying two or five years earlier than would be expected given recent rates. Often [they are] people who are quite ill to begin with.

“It is possible that cuts or freezes to services have a particular bad effect on this group – even cuts and freezes that might appear very minor – because the group is so vulnerable.

“Increased anxiety resulting from knowing you might have to move home or even have no home has long been known to be very damaging for the health of very elderly people.”

The rise in mortality corresponds with a crisis in funding for care homes: but from October this year, pensioners will begin to be affected by the bedroom tax, which means further issues with home and rent.

In later life, people are particularly vulnerable to changes of their income situation. In Britain, there is a long-standing correlation between old age and poverty. Old age pensioners are more likely to be affected by poverty than paid workers (Ogg 2005). Widowed women are at greatest risk (Gordon and Townsend 2000). …. Although the Department of Work and Pensions states a remarkable reduction in pensioner poverty over the past decade (DWP 2005), nearly a quarter of all British pensioners continue to live in poverty at the beginning of the 21st century. That means that a significant proportion of British older citizens are excluded from full participation in social life.

Or, as the coalition cuts bite down on those living in poverty, living with disability, the ill, the vulnerable, the people already living close to death – the lifeline’s cut, the support that was keeping them alive is trashed, and people die. The thousands who have died as ATOS assessed them fit for work have already been discussed in Parliament, and ignored by the government: but older people, exempt from the fit-for-work assessment, are also dying of the cuts.

Since December last year, a petition has been waiting for a response from the Department of Work and Pensions. It now has over 50,000 signatures and still no government response:

We call for a Cumulative Impact Assessment of Welfare Reform, and a New Deal for sick & disabled people based on their needs, abilities and ambitions.