There are six panellists tonight – five announced yesterday and a special sixth this morning. Four men, two women, plus Bullingdon Boy Dimbleby (who appeared thoroughly taken aback when he was in Glasgow and the Deputy Leader of the SNP, the leader of the Scottish Conservatives, and the Shadow Secretary of State for Scotland, were all on the panel… TOO MANY WOMEN you could almost hear him thinking).

And … George Galloway. The Respect MP, who represents no one in Scotland and whose party has no representation in Scotland. The rape apologist. If it matters, which I don’t think it does, he’s against independence. Okay, fine, the BBC wanted a comic turn, they got him. But it really would have been better for the fifth seat to go to the Scottish Greens, either Patrick Harvie or Alison Johnstone. 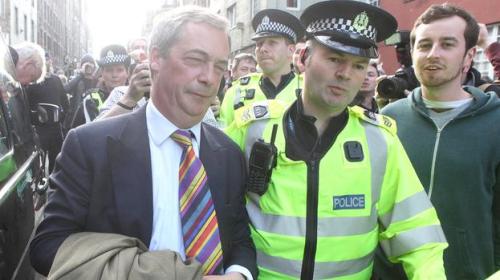 But this morning, the BBC decided they could have a sixth panelist. That one is Nigel Farage.

Just a month ago, apparently trying to have a bit of a campaign moment in Edinburgh for the by-election next week in Donside (go figure: apparently Farage didn’t realise Aberdeen is nowhere near the Canon’s Gait on the Royal Mile), Farage was confronted, barracked, and eventually had to leave in a police van as no taxi would take him.

Mike Small asked the next day in the Guardian:

Thursday’s confrontation between Nigel Farage and Scottish protesters has led people to question just why UKIP is so unpopular in Scotland. However, it is the wrong question to ask. Instead we should be asking just what has happened to English culture that a party with a loathsome agenda of homophobia, barely masked racism and a litany of other far-right notions has made such headway in the 21st century. One answer is the media’s obsessive treatment of personalities and not politics. The other is the extraordinary gulf that’s developing between Scotland and England about the twin referendum campaigns and the political cultures they reflect.

UKIP polls at 0.28% in Scotland. Even so, it is improper for the party leader to be allowed on a major TV programme to campaign for his candidate a week before the by-election. Farage has nothing useful to say about the independence referendum, and the panel already has one comedy turn in the shape of George Galloway – who has, even so, more of a connection with Scotland and Scottish politics than Nigel Farage.

I wrote in part to the BBC in complaint about this:

David Dimbleby has long demonstrated a lack of interest in Scottish politics & indifference to what a Scottish studio audience want to discuss with the panel. Presumably the idea is that a “national audience” will find a Scottish panel debating Scottish politics with a Scottish audience too boring for words, so – given the recent confrontation between left-wing students and Farage on Edinburgh’s Royal Mile – the hope is there will be some entertaining barracking of Farage from the studio audience to give the “national audience” some fun.

The teenagers who applied to be part of the BBC Question Time audience are being mocked by this. It’s appalling treatment.

The Scottish Green party have also lodged a complaint, noting that in 14 years of Scottish Green MSPs in Holyrood, the BBC have only once asked one of their party to appear on Question Time (and that was over two years ago). They spoke to the editor of BBC Question Time this morning, Nicolai Gentchev:

The rationale for this selection may include UKIP’s recent success in the English local elections. UKIP now have approximately the same number of local councillors as GPEW, despite blanket media coverage. But this is NOT an English local election, it’s a debate with a Scottish independence focus, taking place during a Scottish Parliamentary by-election.

This failure even to attempt balance in party political terms, or in terms of the referendum debate is surely a breach of the BBC’s duty to impartiality. Patrick Harvie discussed these various points with Nicolai Gentchev this morning, and our head of media Jason Rose raised them with Phil Abrams of the BBC policy unit. Mr Gentchev defended the decision to include Mr Farage on the programme citing his recent encounter with protesters in Edinburgh; we are deeply disturbed if the BBC’s flagship political debate programme gives greater attention to political stunts than to fair balance.

A spokeswoman for the BBC told STV:

“Tonight’s programme aims to provide its unique audience of 16 and 17 year olds with as broad a range of political opinion as possible, while offering a UK wide audience at home a varied and interesting political and current affairs debate.

“Nigel Farage represents a party with growing UK support and their recent electoral gains since the 2010 general election makes them of interest to our audience. The Question Time panel is chosen carefully across the series and the Green party has appeared on the programme twice in the last four months. The Scottish Greens will be invited to appear on the programme in a future edition recorded in Scotland.”

To deconstruct that excuse:

Apparently the BBC thinks 16-17 year olds discussing independence issues with Scottish politicians is not sufficiently “varied and interesting”. Nobody twisted their arm, though. This was a BBC notion, to have a youth audience discussing this topic. If they thought it was going to be a boring programme, why did they bother setting it up?

UKIP poll at 0.28% in Scotland, at 0.9% in Donside. They have literally less electoral appeal in Scotland than a crossbreed Tory/LibDem would. The “recent electoral gains” which brought UKIP to be almost on a par with the Green Party of England and Wales, were all in England. And it’s not as if UKIP has been shorted representation on BBC Question Time recently.

Which is why Nigel Farage got dropped in at the last minute?

The Green Party of England and Wales has been on the programme twice in the past 4 months: the Scottish Green Party has not been represented since 10th March 2011, though Question Time has been in Scotland six times since then. This will be Nigel Farage’s third appearance as a panelist in 2013, his fourteenth appearance overall (more than anyone else but the presenters) and UKIP’s fourth appearance in the last four months: 28th February, 7th March and 25th April.

The questions to ask are:

Reminded of the by-election in Donside – the only reason Farage came to Edinburgh last month – David Dimbleby claimed:

How then to explain Question Time’s 28th February Eastleigh by-election special? Was that somehow a “national” election? If so, why? Because it was in England?

You can complain to the BBC here.

The Electoral Reform Society of Scotland have also complained to the BBC.
—-
Response from the BBC, 28th June 2013:

Thanks for taking the time to contact the BBC about Question Time, broadcast on 13 June 2013. We forwarded your concerns to the Executive Editor who passed on the following response:

Question Time is a current affairs programme that covers a range of subjects and debates issues in a UK context. It chooses panellists carefully across the series. We regularly invite politicians and non-politicians from one part of the UK to appear on the programme in other parts of the UK. This programme was no different – it was not an independence special discussing exclusively issues related to the independence referendum. It dealt with a range of topical issues in the news. We aim to offer the audience across the UK as well as in the room, as wide a range of voices and opinions on the issues being discussed as possible.

The only difference in this edition was in the makeup of the audience. 16 and 17 year olds have been given the vote for the first time in next year’s independence referendum and we wanted to look at what sort of things were of interest to and influenced this age group, to acknowledge why these people were being given the vote.

The composition of the audience reflected both those for and against independence, and contained a number of people who were undecided. It was also broadly representative of voting patterns across the party political spectrum.

The Green Party has been on the programme twice since March, and we have offered the Scottish Greens a seat on the panel the next time we come to Scotland in the next series.

Nigel Farage represents a party with growing UK support and their recent electoral gains since the 2010 general election makes them of interest to our audience.

Thanks again for contacting us.

4 responses to “BBC Question Time: why you should complain”