The Conservatives are interested in our views about the fairness of their benefit reforms!

We’re interested in what your[sic] think about benefits. That’s why we’re asking you whether or not you support two fundamental principles upon which our welfare policies are founded – many will say they don’t but many will also be in favour. Your responses will tell us what the majority think.

Go to their website, respond appropriately to their two leading questions (my answers were Yes and Yes because they so obviously want the answers No and No) and tell them what you think (300 characters maximum) in their open question:

Mandate a living wage: end workfare & other anti-employment practices: build enough council houses for everyone to have somewhere to live: fund welfare programmes to support the unemployed, disabled, and ill – the basic infrastructure of a civilised state.

Feel free to leave what you said here as a comment as well as there in their form, if you want a record somewhere the Tories can’t delete it. Or better yet use Twitlonger.

Or if you want to write at more length, it’s been suggested in comments here that

you could send them to Conservative Policy Forum stating that they are in reply to their survey and explicitly requesting an acknowledgement that they have received them and that they will take then into account. Form here – www.conservativepolicyforum.com/contact 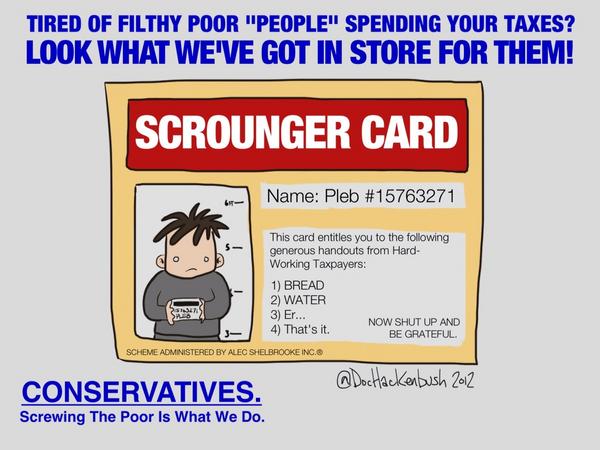 Alec Shelbrooke has also invited comments by email (contact form) about his idea for a Scrounger Card aka Azure Card for all benefits claimants:

@chrissieoap I’d encourage them to email me because the emails I’ve received in last 24hrs have been supportive of it. As are 59% of public.

So if you oppose the idea of a smartcard that ensures the children of poor people won’t get toys, or access to museums, or books, or any food except approved items bought at approved shops, do write and let him know specially.

7 responses to “The Conservatives are interested in our views about the fairness of their benefit reforms!”