Over the past 24 hours, I’ve been putting together a list of women either born or living in Scotland who could have been asked (but most of them weren’t) to be judges at the Creative Scotland Gala Awards Ceremony. There are currently over seven dozen names on the list: the list includes women who are not white, who are not able-bodied, who are not cisgendered, who are not straight.

None of this diversity is apparent to me in the Daily Record/Creative Scotland panel.

I’m sure both Tom Pow and Sanjeev Kohli were fine judges. (Kohli could not be present for the judging, and cast his vote remotely.) This is not to decry the quality of the judges selected, but to point up that this failure to have even a gesture towards gender balance does not in any way reflect either the diversity of Scotland or the Scottish arts community, and certainly does not reflect well on Creative Scotland’s aspiration to put equality at the heart of its activity.

Not only are there no women, equal respect or status hasn’t been afforded the Gaelic language as per the Gaelic ( Scotland) Act 2005. Though gender equality comes first – when Gaelic is represented it’s normally men anyway.

as I said above, it is genuinely harder to pin women down for awards juries, or it was for us at the Film Festival. This is true. Childcare, etc. The world we live in. Possibly less confident/entitled about it, possibly less interest in lording it over little ego-rubbing prizes (though that gets essentialist in a way that we ain’t got time for here). BUT until Creative Scotland speak up and answer a simple question, I’m forced to assume they are lying about all these women they approached. There are certainly about a million more than qualified ones that they didn’t. Though at this point I am waiting for them to claim that all the pink invitations got lost in the post, and the internet was down.

According to John Swinney, Cabinet Secretary for Finance and Sustainable Growth,

“The Public Services Reform Bill is a crucial part of our work to simplify and improve public services. We must get maximum value for taxpayers’ money and the Bill will remove duplication, provide greater clarity for public service users and promote more effective use of resources.

“We have already reduced the number of public bodies on our baseline list from 199 to 161 and this Bill, together with the Children’s Hearings Bill and the Scottish Parliamentary Commissions and Commissioners Bill, will deliver a further reduction to around 120 by 2011 – that is a real achievement that far outstrips our commitment to cut the number of public bodies by 25 per cent.”

The Creative Scotland Limited board, by the way, is eight men and three women. The three women are

As from 1 July 2010, this site will no longer be updated and will be retained for Archive purposes only.

For the latest information on the arts, screen and creative industries in Scotland please visit:

While I was compiling the list of names on Creative Scotswomen I tried to add a link to a website with further information about them. These sites were sometimes easy to find, sometimes difficult. Sometimes the best site was a profile page at www.scottisharts.org.uk.

One site that never came up was www.creativescotland.com. But it’s a relatively new site. Google’s search algorithm finds sites according to the number and quality of links to them, not just by the information on them. So, I searched the Creative Scotland site, looking for information on these artists.

This was what I found:

I haven’t searched the Creative Scotland site for all 86 of the names currently on the list. But for every one I did search on, that’s the result I got: Your Search Yielded No Results.

This is not the case when I search on Andrew Dixon, the CEO of Creative Scotland Limited. Then I find a lot of material. 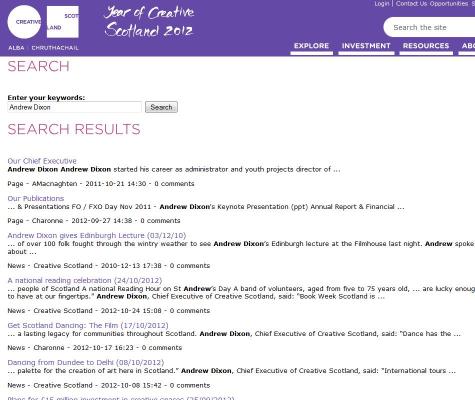 Is this the reason Creative Scotland didn’t ask more than a dozen women? They looked for them, but “their search yielded no results” because their website doesn’t have any of that kind of information?

Lorna Waite posted the original question on Facebook on Wednesday, and followed up with further points:

I understand that the Daily Record organised the judging panel from the phonecall I received from the Events Manager so I was interested in what accountability there was re Creative Scotland. Who chose the judging panel and signed off on it as being acceptable? There are also no Gaelic speakers on your panel either. So neither half the populationnor any Gaels are involved either. How is this equality? You have an ‘Equalities Manager’ I have been told. Was she consulted? We were also informed in an email that Creative Scotland is a business, it is not, it is a publicly funded body. All male lists are unacceptable in any organisation.

Andrew Dixon’s response does not actually answer any of the points raised. He says:

We understand that the Creative Scotland Awards have not been without their controversy. While the judging panel does, absolutely, include a cross section of high level expertise in arts and culture, it does not, unfortunately, include any women. This was not our intention. Several judges, including women, pulled out at a late stage meaning our final panel did not have the demographic profile we would have liked and we apologise for that.

According to Brian Ferguson in the Scotsman:

It is understood the three women who pulled out – whom Creative Scotland has refused to name – did so in the wake of criticism of the quango over the last few months.

There has been no other response from Creative Scotland. Their Gala Dinner, which is planned as a black tie event with free seats for the nominees and £100 tickets for corporate guests, doesn’t even appear to be intended as a fundraiser: Creative Scotland merely hope to recoup their costs in holding this Gala Dinner, not open to the general public… unlike previous Scottish Arts Council award events, which are recalled by attendees as low key affairs, with tickets priced at a tenner or a fiver, open to all.

From Facebook “The majority of the seats will be allocated on a complementary basis to the finalists. The awards – a partnership between The Daily Record and Creative Scotland – are planned to offer an opportunity to celebrate a wide variety of cultural success stories during 2012, the Year of Creative Scotland. A limited number of seats are being made available to private sector organisations at a cost of £100 per head, which will go towards covering the cost of the event.”

Filed under Equality, In The Media, Scottish Culture, Women

One response to “Scottish Arts Council”