We firmly believe that the people best placed to take decisions about Scotland’s future are the people who choose to live and work in Scotland.

This is not to argue that Labour or the Tories or the LibDems aren’t also flawed: I agree with this post at Better Nation that argues none of Scotland’s parties are properly fit to run this country right now. But the electorally-fatal flaw for each party is when their actions clearly belie their stated purpose.

The Tories claim to be conservatives, to believe in a free market: but they’re wrecking cherished institutions with unwanted and unthoughtout reforms for crony capitalism. Labour are supposed to be the party of social justice, but Ed Miliband speechifies on cutting the economy and retaining Tory damage if he wins in 2015. The LibDems… well, they’ve been Clegged.

But the SNP claim they want to bring political power back to Scotland: to give the Scottish people the right to control our own destiny. Scottish people like Rupert Murdoch, Anders Fogh Rasmussen, Brian Souter, Donald Trump, and Ian Wood? (I have a lot of admiration for the Green Party of England and Wales, and even more for the Scottish Green Party, but neither one has ever really held power or, as far as I know, has ever been seen by ambitious youth as a means for a respectable career in politics. So they haven’t exactly been tested in the same way as the other parties have.)

Last Scottish Parliamentary election in 2011 I was still undecided how to use my constituency vote even as I walked into the voting booth: I wouldn’t vote for the Tories or the LibDems. (Yes, the Scottish Liberal Democrats are not, in fact, in coalition with the Conservatives. But at least one electoral flyer for the LibDem candidate bragged proudly that I should vote for him because now the LibDems were in government.) I wasn’t that keen on the SNP, but I was moderately okay with Shirley-Anne Somerville. I was even less keen on Labour, but I like and trust Malcolm Chisholm, who currently holds the record as MP and MSP for resigning from a ministerial position in order to stand up for his principles. (Four times. Now that’s a politician you know you can trust to do what he’s said he’ll do regardless.)

So I voted for Malcolm Chisholm, and my list vote went to the Scottish Greens and Alison Johnstone got in as a Regional MSP. And I’m happy with that as a result.

I saw during the local elections earlier this year that gaining a council seat is, in many areas – including Edinburgh – really more like a game of musical chairs for the parties than democracy. An independent in Edinburgh or Glasgow doesn’t really stand a chance next to the party machinery that works to get their candidates into office.

I’m sure that SNP supporters are reading down this post all set for a blast at me or at the other parties – ready to point out that Labour, the Conservatives, the LibDems, have all had politically damaging involvement with powerful and rich men, why blast the SNP in particular? Please note, if you’re one of them, that I have taken aim in other blogposts (and will again) at politicians from all of these parties. My point for the SNP is that their entire political ethos is supposed to be that the Scottish people shall make our own decisions for our future. Yet, when the moment comes, all too often the SNP in national or local government concludes that the Scottish people shouldn’t decide.

A national blast from the SNP howled at the Labour group on Aberdeen council for turning down Sir Ian Wood’s plans for Union Terrace Gardens, in favour of what the people of Aberdeen who use the gardens wanted.

The cooperation delivered to Sir Brian Souter for his profits for Scottish transport – and a knighthood which obviously had completely absolutely nothing to do with SNP donations, no of course it didn’t.

Overriding the planning decisions of Aberdeenshire in favour of Donald Trump. Friendly meetings between Salmond and Murdoch. The decision to U-turn on nuclear weapons, thinly disguised as a vote for NATO membership.

None of this bespeaks any concern with what Scottish people actually want. And instead of challenging the SNP on this, SNP members and supporters predictably get cross with those who point this out. It’s as old as Hans Christian Andersen. But the SNP really does need to get its skivvies on. 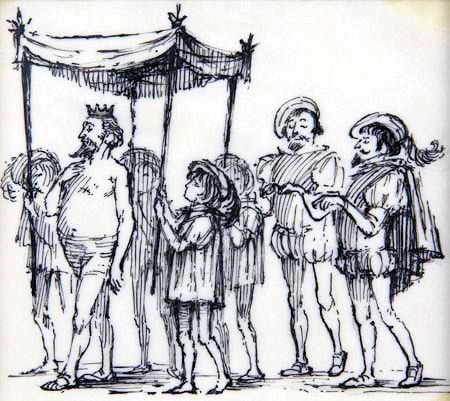 Update: Interestingly two SNP MSPs from the Highlands, John Finnie and Jean Urquhart, are quitting the party and will be Independents from now on – over the NATO/Trident issue.

From evening after the SNP conference, Jonathan Mackie notes:

It’s the first time our payroll vote has had to be rolled into action. Iain Macwhirter called the outcome of the NATO debate “The day the SNP lost its innocence”, when we “compromised its principles for the sake of political expediency.” I think the loss of innocence is wider than the straight-up outcome of a single vote. We’ve never had a period in our history when so many depend on the party and its apparatus for the means to put food on the table and a roof over their heads. I joined when we had 3 MPs (shortly to increase by 33% thanks to a by-election win in Perth), 2 MEPs, a couple of hundred councillors and no Holyrood. There were maybe 20 people employed by MPs, MEPs and the Westminster Group, excluding those at HQ involved in the day-to-day administration of the party machinery. Shadow Ministers were using annual leave from their day jobs to discharge their political role. We are in a very different situation now, and you can increase that number around 12-fold as a minimum. That those bodies were key to Friday’s outcome is unprecedented in the party’s history.

Trump’s first application, therefore, was rejected by the local council on the grounds that it failed the sustainable development test “in spades”, according to Green councillor Martin Ford. Then something unprecedented occurred: the Scottish Government called in the application, taking it out of the council’s hands. This has never happened before. They reversed the original veto and gave the project the green light. The estate is in First Minister Alex Salmond’s constituency.

The argument was that the benefits to the local community through new jobs and tourist expenditure outweighed the environmental concerns. Fine, except the project was contracted to an Irish company, and much of the casual work was given to migrant labour. And with the Trump complex designed to be entirely self-contained, experts predict the positive impact on local economy will be negligible, certainly compared to the negative impact on the environment.

Councillor Martin A. Ford writes: “Deciding the Fate of a Magical, Wild Place”

It was just a planning application – but the reaction to it was quite extraordinary.
I am referring, of course, to the application from New York billionaire businessman Donald J. Trump, chairman and president of The Trump Organization, for planning permission to build housing and a golf resort on the east coast of Scotland at Menie, near Balmedie, in Aberdeenshire.