George Osborne, chancellor of the dodge

Today, George Osborne got into a first-class carriage in a train to Euston, with a standard-class ticket.

Everybody knows what’s happened to the trains since they were licensed to private companies: impenetrable rules, incomprehensible fares, crazy fees if you have to make a short-notice decision. It has nothing to do with any “true price” for the journey, only the vast amounts they can get away with if you have no choice. Let’s be honest, it’s extortion. A medieval landlord could name his own tithes if people had nowhere else to go and East Midlands Trains is clearly inspired by those happy days. – Victoria Coren

Unfortunately for him, Rachel Townsend, Granada Reports Correspondent, was on the train with an iPhone and not afraid to use it:

Very interesting train journey to Euston Chancellor George Osborne just got on at Wilmslow with a STANDARD ticket and he has sat in FIRST CLASS. His aide tells ticket collector he cannot possibly move and sit with the likes of us in standard class and requests he is allowed to remain in First Class. Ticket collector refuses #standoff – Digital Spy

George Osborne earns £134,565 a year as Chancellor of the Exchequer.

He owns a 15% share of the family business Osborne and Little founded by his father.

CLASS. His aide tells ticket collector he cannot possibly move and sit with the likes of us in standard class and requests he is allowed to

Since May 2010, he’s lived rent-free at 11 Downing Street, and let out his Notting Hill home for – reputedly – an annual rent with more than five zeroes in the number. He’s flipped the designation of his second home apparently whenever it seemed profitable to do so. (He was required to pay back nearly £2000 definitely over-claimed.)

Shortly before Mr Osborne entered Parliament in 2001, he bought a large farmhouse in his Tatton constituency. Instead of taking out a mortgage on it he increased the mortgage on the London property to pay for his new home. When he had been elected an MP, he designated his London property as his second home with the House of Commons fees office, allowing him to claim back on his additional costs allowance the interest on the portion of the mortgage representing the farmhouse.

Two years later, Mr Osborne took out a separate £450,000 mortgage on the farmhouse and flipped his second home designation, enabling him to claim those mortgage interest payments on his ACA. Since then he has claimed up to £100,000 in mortgage interest payments for the farmhouse mortgage. During this whole period, Mr Osborne told the Inland Revenue that his primary residence for tax purposes was his London home.

In 2006, Mr Osborne sold his London home for £1.48?million, making a £748,000 profit. Because it had been declared for tax purposes as his primary residence since he bought it in 1998, he did not have to pay capital gains tax.

He claims he wouldn’t benefit personally by cutting the top tax rate from 50p to 45p because his only income is from the Chancellor’s salary and that’s below the £150,000 a year threshold. Channel 4 recently pointed out that he is, in fact, a taxdodger.

My updates may slow down – I remain in standard and no sign of George. Has he paid the upgrade? #getGeorgeinstandard

Now if the likes of us had done this even by accident, we’d move when the collector told us to. Or pay for the upgrade. Or be fined by the ticket collector, on the spot, with the possibility of appealling against a genuine mistake weeks later.
But that’s not for Tory politicians like George Osborne, absolutely sure of his privilege.

One of those sentences I never thought I’d write: Well done that ticket collector!

Everyone else gets stung by the huge upgrade costs of being on the wrong train with the wrong ticket, even if it happened by accident. Why should George Osborne think himself magically exempt?

Passenger Focus reported in May 2012 that it had already

received 400 complaints this year from passengers who say they have been unjustly fined or even pursued through the courts for forgetting railcards, losing tickets they could prove they had purchased or travelling on the wrong train. Hewitson said: “Coupled with the fact we have a fares structure that doesn’t make it easy to get it right, you ought to have a procedure in place that allows a little discretion.”

It believes there is a greater, more willing use of the powers train operators have to impose penalties, which used to be employed only in cases of deliberate or repeated attempts to defraud.Examples collected by Passenger Focus include a man who forgot to print his tickets but was advised to board by the train conductor on showing his email confirmation, yet subsequently received a court summons for not having a valid ticket. A femalea passenger who forgot to bring the railcard she used to reduce a £14 advance fare to under £10 and was issued a penalty fare for £260 (twice the most expensive peak fare for that journey), despite being able to prove she did have a railcard.

Two elderly, disabled passengers who travelled home on an earlier train than booked after an accident, believing the train operator would understand their circumstances, were issued with a notice for £239 unpaid fares.

I know a youngster who at just past age 16 lost the £5 note and return train ticket he had in a cinema and was stranded in a nearby town with just a £2 coin. With no phone on him and no buses to his home village he gambled – broke the law – and bought a £2 child single ticket – all he could afford to get home. He got caught and was fined. The fares difference was £1.80 he just didn’t have. And then you see stories like this. No wonder people get peed off. What was our Chancellor doing in 1st class with a standard ticket, anyway? – DigitalSpy MargMck

I originally cited a screenshot of a Twitter account purporting to be one of Osborne’s aides, but which Puffles tells me is a spoof.

It appears this is not the first time Osborne’s tried to dodge paying First Class fare with a Standard class ticket though.

Ticket inspector on my train just got a high five: george osborne tried to sit in 1st class with a std tkt. Inspector said NO

Yes. Back in May.

Why did 80,000 people boo George Osborne?Because that’s the maximum capacity of the Olympic Stadium. 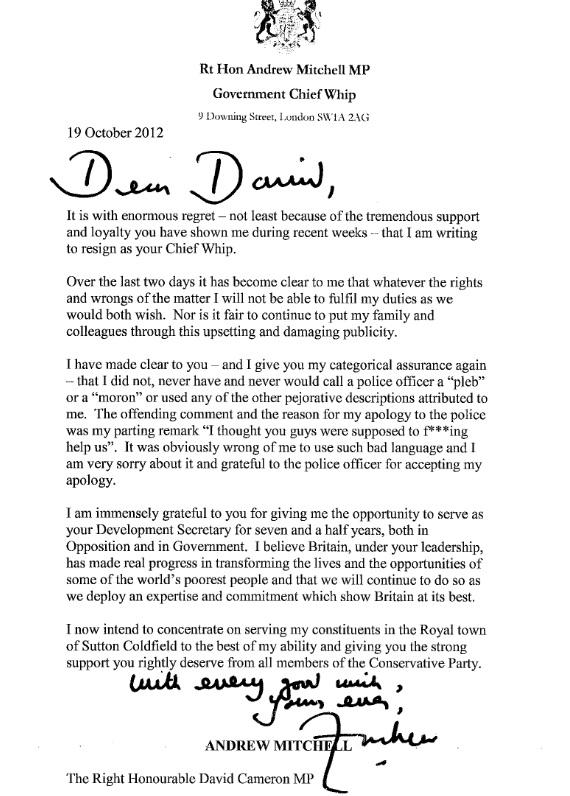 And truly intriguing – Andrew Mitchell’s finally had to resign.

Either he or David Cameron evidently realised that there couldn’t be two “Tories are snobs who think of us as plebs” stories circulating at the same time, and that merely telling the rest of us that the story was “over” wasn’t working.

Virgin Trains official story is that (a) they were aware that Osborne was travelling with the wrong ticket before he got on the train, because his minder let them know; (b) there was no direct interaction between Osborne and the ticket collector.

Mr Osborne had no direct communication with Virgin Trains staff.

An officer from the Metropolitan Police, escorting the Chancellor, alerted the train manager in advance that Mr Osborne did not have the correct ticket, Mr Rowe said.

Once on the train, the train manager informed the police officer that the Chancellor would have to pay an upgrade fare, a request which Mr Osborne’s aide initially refused.

But after asking for a second time, the Chancellor’s aide agreed that the extra £160 would indeed be paid.

Staggered by Osborne denial. After all, why would aide need to approach inspector at all if he agreed to upgrade?And why would he say

…”he can’t sit here.” Virgin denial more understandable – need to keep on side with govt over West Coast mainline

The fabulous Zelo Street has checked George Osborne’s expenses, and the Chancellor invariably purchases (and claims on expenses) a standard class fare. He never purchases a 1st-class ticket.

It would seem that either Osborne really assumes “first class” means the class of the passengers, not the price of the fare, or that he has on more than one occasion got onto a train with a standard class ticket and taken a first-class seat on the basis that no ticket collector was really likely to make a fuss about it.

6 responses to “George Osborne, chancellor of the dodge”