Danny Boyle did great. So did all the volunteers who took part. Literally the best thing Seb Coe did for the London Olympics was ask Danny Boyle to plan the opening ceremony and give him a free creative hand.

I saw a tweet just after Michael Fish and the non-hurricane warning appeared saying to the effect that most Olympic opening ceremonies try to impress the world. This ceremony wasn’t meant for the rest of the world: it was meant for us.

(Kes. I saw Kes. And Frankie Says Relax. I remember when the BBC banned that.)

[Update, 30th July: Apparently it was so British-orientated that NBC cut the tribute to the 7/7 dead and had no idea who Tim Berners-Lee is.]

It was all really, peculiarly, brilliantly British. As if Danny Boyle had thought: we are all feeling staggeringly horrible about this, for very excellent reasons: let me do a show that will remind us of our mutual shared Britishness, before the athletic teams march. Of course that cheap Nazi knock-off Aidan Burley hated it.

Danny Boyle got J. K. Rowling to read from Peter Pan, as a dance of nurses and trampolining children celebrate the NHS. Which is then attacked by monsters and the children are protected by the nurses and rescued by Mary Poppins. Have the suffragettes marching and Tim Berners-Lee and Mr Bean and cyclists with beautiful luminous dove’s wings.

This is for everyone #london2012 #oneweb #openingceremony @webfoundation @w3c

Okay, that was several million spent on celebrating the NHS that the NHS could actually use, but under a hostile government who are the ones sending in the monsters to shred the NHS in England and Wales, it was lovely to see our NHS celebrated on international television. And it was very British. 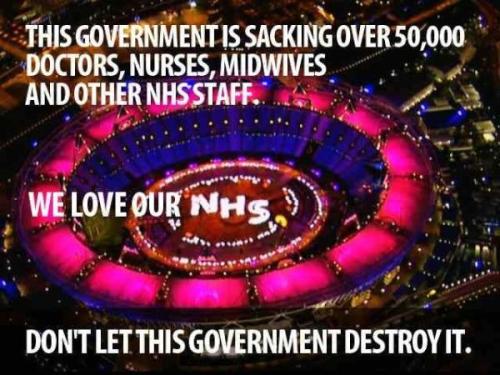 All the betting and discussion about who would be the one to light the Flame. And in the solution Danny Boyle came up with, unique and assured, was to have each national team carry a copper petal, which were each fitted to long stalks and lighted by torches from seven young athletes, and the lighted petals rose and came together and made an Olympic cauldron – a flower of flame made by all the nations, lit by seven torches.

And I say this having been furious about the Olympics now for months, for years: about Dow Chemical and Bhopal: I was moved.

Thanks to Tim Berners-Lee and the other state-funded inventors of the Internet and the World Wide Web, I know that during the Opening Ceremony, cyclists who were protesting the creation of empty roads for the rich in a critical mass protest, were kettled and arrested by the Metropolitan Police.

From 5 Creepy Things London Did to Prepare for the Olympics:

It’s an unfortunate happening, no doubt chock-full of enough wacky shenanigans to staff a Rob Schneider movie, but sometimes athletes have missed their events at past Olympics. But not this year: London has designated special lanes in the city not just for athletes, but for Olympics officials, people working for sponsoring companies and, hey, what the hell, anyone else rich enough to buy their way in.

Not allowed behind London’s velvet off-ramps, however, are ambulances carrying such trivial things as blood for donations and elderly people in need of dialysis. True, ambulances carrying people in need of emergency medical care will be able to turn on their sirens and use the special lanes if they absolutely have to, but unless you’re firmly heading toward the light, you’ll just have to sit in the unmanageable Olympics traffic with the rest of London.

The Opening Ceremony, when no athletic events were taking place, and all the athletes and the Olympic officials were either at the opening ceremony or resting up for the weekend’s events in the Village, was actually the best time possible for a critical mass protest against these roads of privilege without disrupting anything for real.

But the Metropolitan Police decided to attack them anyway.

So that’s the Olympics: no right to peaceful protest. The critical mass cyclists had their bikes confiscated, they were arrested, and shipped off in buses to, apparently, a purpose-built detention centre in Leytonstone. London 2012 is determined to compete with Beijing 2008:

That’s how to inspire a generation: arrest them.

PS: I wonder if the Wombles came along afterwards to clean up the six billion pieces of paper?

By the end, Twitter had reverted to its default setting: amusing snipes, cynicism, world-weary grumpiness and fish-in-a-barrel BoJo mockery. The upcoming Paralympics means that we still have plenty of nationally-unifying sporting brilliance to come, but perhaps the closing ceremony brought the curtain down on a nation’s brief affair with earnest non-cynicism that was brought about by one ceremony and killed off by another. Thank God.

5 responses to “The Opening Ceremony”