Michael Gove has approved three Creationist-run state-funded “free schools”: Exemplar-Newark Business academy, Grindon Hall, and Sevenoaks Christian school. All three schools promise unblushingly that they will teach Creationism / Intelligent Design in RE, and stick to the facts in science classes.

However, we vigorously challenge the unscientific certainty often claimed by scientists surrounding the so-called “Big Bang” and origins generally.

We believe that no scientific theory provides – or ever will provide – a satisfactory explanation of origins, i.e. why the world appeared, and how nothing became something in the first place.

We will teach evolution as an established scientific principle, as far as it goes.

We will teach creation as a scientific theory and we will always affirm very clearly our position as Christians, i.e. that Christians believe that God’s creation of the world is not just a theory but a fact with eternal consequences for our planet and for every person who has ever lived on it.

We will affirm that to believe in God’s creation of the world is an entirely respectable position scientifically and rationally.

The Grindon Hall principal, Chris Gray, told the Guardian that this document (dated 23rd January 2007, document authors Rachel Nurse and B Abdelnoor) is “out of date”:

“First of all, it’s illegal. Secondly, we were questioned at length about it when we were interviewed to be a free school, and that was to the [Department for Education]’s satisfaction. A number of schools have been sadly turned down on that. That document is from a time when we were not as clear as we are now about the proper distinction as to what is taught in a science lesson and what might be taught in assembly – two different spheres.

“If children question for themselves their origins, that’s what we want them to do – to ask sensible, responsible questions. Am I here by accident, or – dare I use the word – design?” 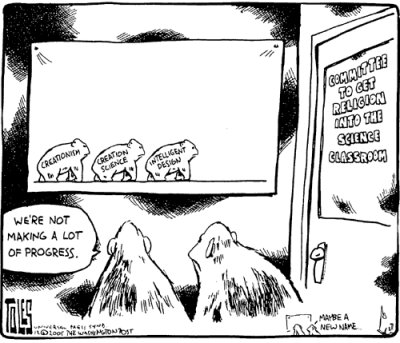 According to Nelson Jones, the problem is not that Creationists aren’t smart. Based on an admittedly small sample of one (a Creationist he knew at Oxford):

So I’ve never made the mistake of underestimating creationists. Creationism may be stupid, but creationists are not – or at least need not be. It may well take a special sort of intellectual dexterity to maintain beliefs so out of keeping with the modern world as the notion (held by some but by no means all creationists) that the earth is less than ten thousand years old. This may help explain why creationists can prove so effective at political manipulation. Even so I never imagined that in Britain, unlike in the United States, we would ever see them plant their foot in the door of political or social influence. Or run publicly-funded schools. It’s disconcerting, to say the least, to learn that at least three of the first batch of free schools, established as a result of education secretary Michael Gove’s initiative, have backers behind them of known creationist sympathies.
….
The real problem with letting creationists run schools is not that, given half a chance, they would fill children’s minds with fake science and inaccurate information about the world. This matters, of course, but people managed to get by quite happily for centuries believing that the sun revolves around the earth (as it clearly says in the Bible, though few “Bible-believing” Christians insist on it today). In any case, they won’t be allowed to present creationist ideas as “science”. No, the problem is with all the other stuff they believe. A school with a creationist “ethos” would an unwelcome proposition even if no teacher there so much as mentioned the Book of Genesis.

While Grindon Hall has a terse anti-bullying policy (their parental undertaking document expends much more wordage on mobile phones) it sounds very positive:

No bullying of any kind is ever tolerated at Grindon Hall. Bullying will always lead to the most serious disciplinary action being taken, and where a thorough investigation reveals that bullying has involved extortion, physical aggression or serious humiliation, or has been repeated despite warnings, it will almost invariably lead to expulsion.

Homophobic bullying is almost endemic in Britain’s schools. Almost two thirds (65 per cent) of young lesbian, gay and bisexual pupils have experienced direct bullying. Seventy five per cent of young gay people attending faith schools have experienced homophobic bullying.
Even if gay pupils are not directly experiencing bullying, they are learning in an environment where homophobic language and comments are commonplace. Ninety eight per cent of young gay people hear the phrases “that’s so gay” or “you’re so gay” in school, and over four fifths hear such comments often or frequently.

The 2012 School Report, published a couple of weeks ago, showed some improvements but faith schools invariably lagging behind:

The Chair of the Accord Coalition, Rabbi Dr Jonathan Romain MBE, said

‘Many staff and pupils endure a miserable, and sometimes also concealed experience in schools, due to homophobic bullying and attitudes. This kind of behaviour can have a huge impact on their sense of wellbeing, and in the case of young people, a negative impact on their social and academic development.

‘It has been over two years since the Government published its Coalition Agreement, which stated that it would help schools tackle bullying and “especially homophobic bullying”. However, the Government has yet to demonstrate in policy terms what its commitment entails.

‘Homophobia is worse within the faith school sector, but it is an issue that must be tackled in all educational establishments. The Government must therefore take firm action and work with education providers and faith groups, to ensure that schools better challenge prejudice and actively promote an acceptance of sexual diversity and transgendered people. They have many tools available to them, such as the publication of new guidance and distribution of best practice; better and more thorough school inspections and monitoring, as well making modifications to the statutory school curriculum.’

Creationists in the US certainly link up strongly with homophobic Christianity. Faith schools in the UK have been shown consistently over a five-year period to have transphobic and homophobic bullying problems far above the national average.

Regardless of what these schools intend to teach the children in science classes – how do they intend to support and protect the lesbian, gay, bisexual and transgender children as their pupils? How are LGBT members of staff treated? Are there any out members of staff at these Creationist schools?

We may also note that some schools in England have opted out of the HPV vaccination programme which, if universally applied, could diminish the risks of cervical cancer in later life.

The jab guards against two strains of the human papillomavirus (HPV) virus – 16 and 18 – which cause 70% of cases of cervical cancer. It is offered routinely to girls aged 12 to 13.

But an investigation by GP magazine found 24 schools in 83 of England’s 152 primary care trust (PCT) areas were opting out of the vaccination programme, many of them on religious grounds.

The magazine found the majority of schools opting out did not tell their local GPs, where the girls could be offered the vaccine.

Just two of the 15 PCTs where schools are denying the vaccination course told GPs of their decision.

Only five of the 15 PCTs said they informed pupils or guardians how to obtain the vaccine elsewhere, the figures show.

and the outrageous claim:

A school is in loco parentis to its pupils in some ways. That legal obligation to care for the children does not extend, though this school apparently thinks it does, to dictating a girl’s sex life. It is none of the school’s business when a teenager decides to start having sex, providing it’s not with one of the school’s staff and all parties involved are consenting.

The notion that a school has the right to deny a child vaccination because the school thinks it would be better for a girl who has sex with an HPV-infected boy to risk cervical cancer – an infection that could happen even if she waits till marriage to have sex – is the most vicious ideology imaginable.

Yet apparently the schools practicing it have for the most part neither bothered to let the children’s GPs nor their parents know that the children are unprotected.

What are these Creationist schools doing to the girls in their care?

Nor does this neglect of healthcare for girls stop at failure to protect them from cervical cancer.

Michael Gove approved a new “Sex and Relatonships Council” last year. This SRE council promotes abstinence-only sex education – that is, no information on how to use contraception, how to get an abortion, or how to form healthy sexual friendships, only the instruction to stay celibate til marriage.

To be clear. Our concern is not that Lovewise are presenting a Christian perspective on abortion. Nor that they oppose legal abortion. We have written before about the difference between facts and values. What we object to is the use of misleading, biased and at times, outright false information, which is unsupported by scientific evidence. For example, slides from Lovewise’s abortion presentation (saved from the site on 13th July but mysteriously now no longer viewable) claim that abortion leads to infertility, doubles the risk of breast cancer and increases the risk of committing suicide seven-fold. These claims simply do not reflect scientific consensus on abortion.

Besides the disregard for truly evidence-based information, there is also the effect such presentations might have on children’s wellbeing. How will a young woman who has experienced pregnancy feel when she is told ‘there are always bad consequences’ to abortion? How might a group which claims ‘homosexual activity is damaging to the mind, body and spirit’ affect the feelings of a young person who is LGBT? And how might young people’s access to safe, confidential sexual health advice be affected by listening to an organisation which teaches that contraception is ‘something that is wrong and threatens health?’

Michael Gove doesn’t seem to have much idea what good sex and relationships education ought to be like. His endorsement of Creationist schools appears to be strong evidence that the Conservatives are still, at root, the party of Section 28 and sexism.

It’s also telling that the minister of state for schools, Nick Gibb, received two letters about sex and relationships education at school. One letter, from SPUC, which claims 45,000 members in the UK, got an answer from Gibb. One letter, from Mumsnet, which gets five million visits a month, did not.

But SPUC does not represent the majority of parents. Mumsnet’s letter to the DoE – the one that Nick Gibb didn’t reply to – highlighted the results of a survey of its members’ attitude to sex and relationships education. These findings obviously can’t be extrapolated to the whole population, but they are strikingly positive: 92 per cent were happy for their children to attend SRE classes, and 69 per cent thought the subject should be compulsory at primary school.

“It seems odd for the government to ignore parents’ views when it comes to sex education, and you have to wonder why,” says Justine Roberts, Mumsnet co-founder and CEO. To a suspicious mindset, it might appear to be that ministers are on a mission of appeasement to the social conservative tendency, regardless of what parents really want or what is right for children.