Although I’ve been campaigning for Gordon Murdie, I can’t vote for him (Though I would put him first preference if I could.) Southside/Newington is a ward where I don’t think any prediction is possible – not even by looking at what happened last time.

Whereas in my own ward (ward 13, Leith) I think I can make predictions. There are 7 candidates standing, and 3 seats. The incumbents are Munn (SNP), Munro (Labour), Thomas (LibDem).

Turnout last time was 8,391 out of 16,178. Four candidates must be eliminated and three will get seats. What’s my predictions? 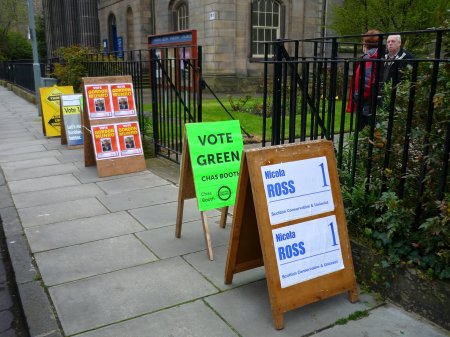 Prediction Two (easy): Irvine McMinn will be eliminated in the first round. The Liberal Party haven’t campaigned in Scotland. I know McMinn’s name because I made an effort to find out the names of all the candidates, but I’ve had no leaflet through the door, seen nothing online, have found nothing on the Liberal Party’s website.

Prediction Three: Nicola Ross will be eliminated in the second round. People just don’t vote Tory in Leith.

Prediction Four: Marjorie Thomas will be eliminated in the third round. The LibDems have a triple fail to contend with – their party’s association with the Tories both UK-wide and in Edinburgh Council (LibDems and Tories voted together for privatisation): the attempted privatisation of services: and of course the trams – though they’re hardly the only offenders, they have been in the lead and crashed with the project.

Prediction Five: Adam McVey will be eliminated in the fourth round. I don’t think the SNP plan of standing two candidates is going to work nearly as well as they think it will.

Prediction Six: At least one of the last candidates standing in Leith isn’t going to make quota. I’ve been massively unimpressed by pretty much all of them.

Prediction Seven: Edinburgh Council will have 5 – 7 women as councillors at the end of the count tomorrow.

Whatever you do: Vote.

3 responses to “Predictions for Leith Ward”