I’ve been trying to write this post for several hours now. Thinking about that. That we do still have to say this, to keep saying it – women shouldn’t ever be forced through pregnancy and childbirth against our will. Abortion on demand is a basic human right.

If anything, pregnancy radicalized my position on abortion. I have never had a pregnancy that wasn’t wanted, but I genuinely struggle to understand how anyone can go through a wanted pregnancy without thinking about what it must be like to go through this experience without the same desire. It must be a nightmare. Pregnancy is so extreme. It takes over your whole body. You need to preserve your sense of self and make your own choices. How must it feel to have someone tell you you can’t? (Glosswatch: Pregnancy, choice and my fantasy life as a celebrity)

Our protest had spontaneously emerged in in less than a week when we discovered SPUC was planning do a series of prolife demos across the UK to commiserate with themselves that for 44 years women have been able to have an abortion legally in England, Scotland, and Wales – and for 44 years women have been scraping together the fare and coming over here from Ireland to get abortions legally as they’re not allowed at home.

If you don’t know Edinburgh, Lothian Road is a four-lane thoroughfare that runs from the West End of Princes Street up to the Tollcross junction – about half a mile that includes posh coffee shops and aged fry-up cafes, the Filmhouse facing off with the Usher Hall, the huge and soulless Festival Square but Ann Davidson’s “Mother and Child” statue representing a South African shanty dweller, a strippers bar next door to a model airplane shop.

Eight out of 10 women in South Africa become pregnant before their eighteenth birthday, mostly unintentionally. As termination of pregnancy is still a big taboo in African countries, most women are scared of it and when they decide to go ahead with them, they want it to be done confidentially.

“They are afraid that their neighbour could sit next to them in the waiting room or the nurses go out of the hospital telling somebody of their abortion,” says nurse Khulo. (African Goals 2010)

SPUC planned to form their antichoice chain up the west side of Lothian Road, starting at Festival Square. We started to arrive when they were already setting up – just five of us at first (prochoice people obviously have more fun on Friday nights). We had handwritten or handpainted cardboard signs, a sheet turned into a banner, even pieces of white paper. All of the SPUC placards were expensively printed on heavy laminated card, and A1 or A2 sized. By about half past eleven, as SPUCoff protesters arrived and sorted ourselves out in front of the Usher Hall, we slightly outnumbered them, but our two groups couldn’t have been more different.

Lothian and Borders Police were monitoring four demos in Edinburgh today – the Pedal on Parliament protest, with two and a half thousand cyclists, the thousands on the Palestine march for the hunger strikers, which passed up Lothian Road less than an hour after the SPUC/SPUCoff protest ended, the vigil in Princes Street gardens for people who died at work, and ourselves. I have a lot of respect for Lothian and Borders Police – while they can be unhappily heavy-handed, in general I’ve found them fairly reasonable with regard to the right to protest. The police began by informing us that if we tried to cross the road and interfere with the SPUC protest they would invoke Section 14 and threaten to arrest us all, but thereafter stood back and made no interferance as we arranged ourselves up the side of the road opposite SPUC with our homemade banners and placards and a borrowed megaphone.

We didn’t chant all the time, but we did give SPUC and passers-by short treats of “Pro life is a lie, you don’t care if women die!” and “One, two, three, SPUC OFF!” Unfortunately, no one had thought to bring songsheets for “Every Sperm is Sacred”. Maybe next time, if there is one.

Mostly, we just stood there. For two hours. About fifty of us, about fifty of them. They wanted to prove something with their kerbside vigil: according to their own press release, to “bring home the reality of abortion”. So because they were there, demonstrating against human rights for women, we had to be there.

In South Africa, since 1996, in public hospitals women can have abortions for a fee of up to R35 (just under £3) or for free if they’re unemployed: up to 12 weeks without giving a reason, after 12 weeks if either the fetus or the woman has a health problem. But because of the stigma against abortion:

they are more likely to choose the private backstreet establishments advertised in the newspapers over public hospitals. You only have to call a cell phone number and make an anonymous appointment. The service is immediate and they always have time for you, even at the weekend. You won’t get the address of the surgery but you will be picked up in a mall or in front of a McDonald’s as happened during our research.

Subsequently, women get what they want: Anonymity. What they don’t get is professional advice, security and post-operation treatment. They also don’t get the announced price. One establishment told us to pay R600 (79 dollar), but pay extra for post-operation treatment although the advert offered all at a cost of R150. The other provided post-treatment like antibiotics but asked for R900 (118 dollars), equivalent to what most people earn in a month. (African Goals 2010)

Forty-five years ago, that kind of “abortion service” was all that was available to women in the UK: “unethical money-makers”, “illegal and untrustworthy”, as doctors and nurses in South Africa describe them today.

SPUC wants that time to return. They don’t want to prevent abortions – they campaign against contraception and comprehensive sex education too.

So we stood here in Edinburgh for two hours, just as our fellow human rights activists were standing against SPUC up and down the country (#SPUCOFF was trending on Twitter for those hours) and we will stand again, if SPUC try to take our human rights away. 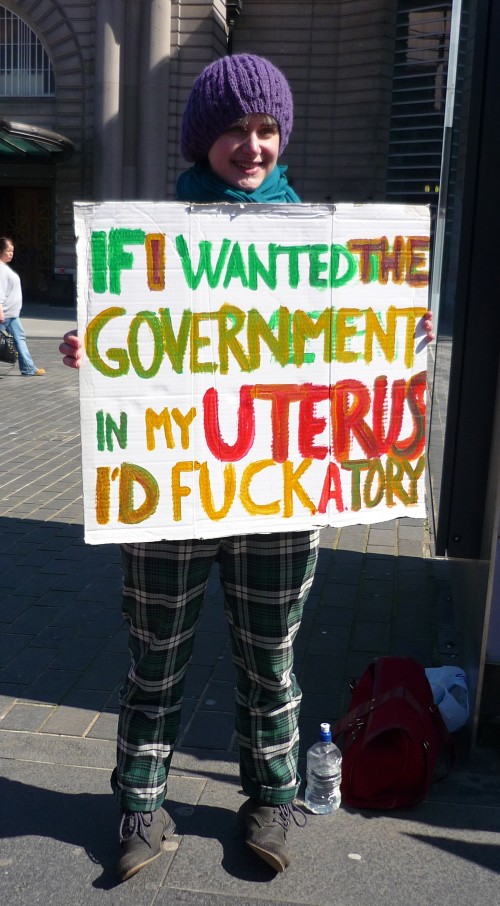 8 responses to “SPUC Off! Keep Abortion Free, Safe, and Legal”