If any of you are still Andrew, we can cure you

In 1963, Arthur C. Clarke wrote a story, titled “Reunion”, which has been anthologised and remembered for nearly fifty years because of its punchline. It is, in structure, simply a shaggy-dog story. The narrator is an alien voice speaking to the humanity of Earth, advising us that we are a long-lost colony abandoned millennia ago because of a harmless but disfiguring genetic disease that had begun to spread through the population. But, the narrator tells us

“People of Earth, you can rejoin galactic society without shame, without stigma. If any of you are still white, we can cure you.”

Several people seemed to think the only problem with the exgay ad that Anglican Mainstream and CORE proposed to run on London buses was that “liberals” would disagree with it: and objected strongly when Boris Johnson stepped in to ban it, though for some it was undoubtedly more of a problem that Boris Johnson had banned the ads than that the ads had been banned:

@BDStanley @jamesrbuk Hang on, have I missed that bit? There *are* ppl who genuinely consider themselves “post-gay”.

@jamesrbuk Huzzah, we can agree on this one. If Stonewall get to put provocative adverts on buses, can’t complain if the other side do too.

Lighting fast moves to give loads of publicity to a small group of homophobes from the London Mayor who stayed on holiday during the riots.

@JonathanHaynes reporting that Boris is going to block gay cure adverts – thereby allowing evangelicals to be martyrs, rather than bigots.

Plus there were the people claiming (Helen Lewis, above: Tom Chivers, patronisingly in the Telegraph; David Shariatmadari, cringingly in the Guardian) that Stonewall was to blame for “provoking” the homophobes with their “Some people are gay; get over it!” anti-bullying campaign.

I don’t actually know where Helen, Tom, or David are sexually-orientated, but as Stavvers says:

Now, I am not sure whether dear David is straight, gay or queer, and this does make a slight bit of difference to how I would respond. If he is somewhere on the queer spectrum, I think I’d start by shaking him and saying, “Mate. Please stop with the Uncle Tomming.” If he is heterosexual, then he can fuck off out of our struggle, thank you very much, and I shall chase him away with torches, pitchforks and intimidating lesbian paraphernalia.

Because truly, two of the most persistent lies that people tell the victims of bullies are one, the victim must have done something to “provoke” the bully – Christians wouldn’t want to be so mean if us queers hadn’t been so provocative about demanding human rights; two, that the best way to deal with bullies is “just ignore them“.

But, lo! Boris Johnson and TfL appear to have completely lost their marbles and have refused to run the “post-gay” adverts. It appears they don’t approve of the “post-gay” message. Instantly they transformed what would have been the subject of ribald mockery into a brave stand for free speech! Madness.

Imagine the furore, the legal cases, the newspaper column inches if TfL had refused to run the original Stonewall adverts. We would have been told that to do so clearly violated equalities legislation. But it seems to be perfectly okay for them to refuse to run adverts the other way. What next? Will we have Boris instructing TfL to run pro-Boris2012 posters but forbidding all Ken2012 posters on the grounds that Boris doesn’t agree with them? Is that how things work in this country now?

What these leftward and rightward advocates for free speech had missed, Transport for London and the ad agency CBSO had evidently noticed, in their shuffle to evade legal responsibility for the ads:

MayorWatch reported that Transport for London said the responsibility for approving the advertisement rested with display ad agency CBSO and that CBSO had used TFL policy to decide on whether to approve the message. TFL said it “reserve[s] the right to overrule them if we do not agree with their interpretation as in this case.”

The problem with these adverts was that they were in breach of the ASA code. Tom Chivers and Helen Lewis are allowed as a matter of free speech to be as offensive about curing homosexuality as they like, in the opinion columns of the Telegraph and the New Statesman: but as Frances Ryan notes in the Independent:

In using the phrase ‘ex-gay’ the adverts are making a clear claim: homosexuality can be cured. Science, that awkward bastion of rationality and fact, says otherwise – the Royal College of Psychiatrists stating in 2010 that there was “no sound scientific evidence that sexual orientation can be changed.”. An advert, unlike the man in the street, is not allowed to carry on talking if what’s being said isn’t true.

There are consequences here – not the “help” that the group’s spokesperson states, but the “harm” that was of such concern the British Medical Association passed a motion against it.

‘Reparative therapy’ does not assist people to “move out of homosexuality” (presumably to the less perverted town of heterosexuality). It manipulates the stigma that being gay is an illness and inflicts “psychological torture.”

These fundamentalists are quite literally praying on the vulnerable– and it’s no one’s obligation to give them a platform to do so.

I wasn’t anticipating the adverts would be banned before they were seen on a bus: I wrote a blogpost Friday on the presumption that we’d all need to keep reporting them to the ASA.

I don’t like Boris Johnson. I suspect his motivations were pretty much electoral.

Nonetheless, well said, and well done: he did the right thing in banning the exgay ads that were planned to drive out today on London buses.

Announcing that the adverts would not go ahead, Boris Johnson said of the campaign: “London is one of the most tolerant cities in the world and intolerant of intolerance. It is clearly offensive to suggest that being gay is an illness that someone recovers from and I am not prepared to have that suggestion driven around London on our buses.”

Core Issues Trust, who tried to place the anti-gay ads on London Buses, have succeeded in placing an ad for their organisation in the New Statesman – Helen Lewis is deputy editor. (Twitterstorm ensues, which so far, the New Statesman is ignoring.) 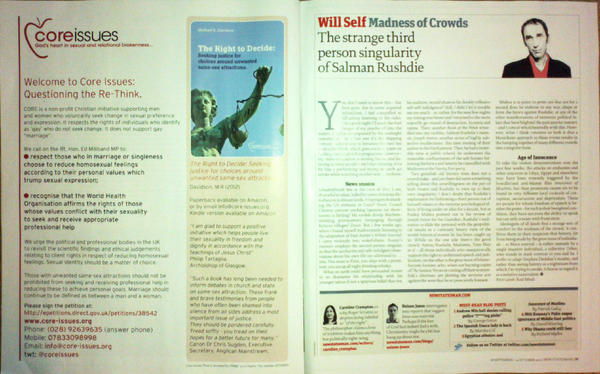 Goodness, they shell out all that money for a full page ad and no one proofs the advert? Maybe New Statesman are being fiendishly cunning…

Filed under In The Media, LGBT Equality, Religion

6 responses to “If any of you are still Andrew, we can cure you”