Trams? Trams? Look over there – a spaceship!

On Saturday 3rd March 2012 Edinburgh bus fares are going to go up. Again.

Princes Street will still be covered in roadworks as they try, once more, to get the lines straight. The obstacle course that we scrambled through on Leith Walk was entirely pointless – they don’t now plan to build tramlines any further than St Andrews Square. The route will run in parallel with the trainline from Haymarket all the way to Edinburgh Airport, where it would have been entirely possible to build a halt, a connecting bridge, lifts, and a feeder road to the airport buildings with a fleet of accessible buses, in half the time and for a fraction of the cost.

“Trams will give passengers a safe, environmental travel choice, a choice which will see reduced congestion and reduced emissions.

“The utilities agreement that has been put in place is the right approach. Allowing a single contractor to do all the work will minimise disruption in the Capital, save money and ensure the delivery of the project. That is welcome news for Edinburgh.”

Yes, it would have been, wouldn’t it? Since 2007, I don’t believe there’s been six months at a time when there haven’t been maximally disruptive roadworks along the originally-planned route from Shandwick Place to the foot of Constitution Street. That is four years and two and half miles of the busiest roads in Edinburgh.

From the 2007 Audit Report on Edinburgh Transport:

9. The Edinburgh trams project is intended to support and promote a growing local economy and create a healthy, safe and sustainable environment. The project is being taken forward in phases. Phase 1, the subject of this report, consists of a tram line connecting Leith Waterfront to Edinburgh Airport (Phase 1a) and a section from Roseburn to Granton Square (Phase 1b).

lay the foundations for the next 30 years of development in Edinburgh. It will regenerate the entire Leith Docks area and re-connect the waterfront with the City of Edinburgh. As well as delivering further regeneration of the waterfront area, this project has real potential to make a huge economic contribution to Edinburgh and Scotland.

Back to the Audit report:

10. The current anticipated final cost of Phase 1 in its entirety is £593.8 million and estimated project costs have been subjected to robust testing.
11. The Scottish Executive has committed to provide up to £500 million for Phase 1a of the project and
CEC a further £45 million. Funding for Phase 1b has yet to be confirmed.
12. A total of £79 million was spent on the project up to the end of May 2007, which includes £17 million to take the two Bills through the Parliamentary process.

By May 2008, Leith Walk was an obstacle course. And though I can’t recall anyone mentioning this particular spend at the time, the Council had already bought 27 of the biggest trams in Europe for both the Airport-Waterfront and the Roseburn to Granton Square lines. The trams cost £2M each. They have never been used for anything but display purposes, and most of them will never reach Edinburgh.

13. Some slippage in the project has occurred but tie is taking action to ensure that Phase 1a can be operational by early 2011.

In 2008, boards appeared up and down the proposed route, promising “Edinburgh Trams – taking you to work in 2011!” 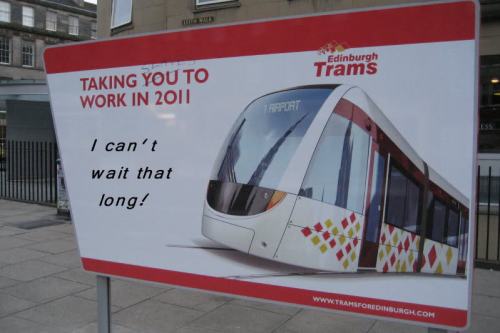 No one I know actually believed we’d have trams by 2011. We could see the scale of the project now, and it was huge. Every old bit of pipe and wire under these ancient streets had to be dug up and carefully replaced along to the side of the road so that, in the second stage, the tramlines proper could be built.

In 2009, Sherlock Holmes had to be moved from Picardy Place, where it had been thought he would stand for a hundred years.

The Leith Waterfront project was hit by the recession. Instead of planning a wonderful on-the-waterfront development where the wealthiest people would want to live (you can wander down to Malmaison and look round at the first stage of their plans) Forth Port announced in 2010 that there would be a giant woodburning power plant in Leith Docks, with a smokestack up to 100 metres high. Local opposition to this was fierce and continuing, but although Forth Ports has gone under, eaten by a larger shark, they still plan to build it, and all Edinburgh Council has said in response to the protests is “Later.” This project, if built, is not the kind of thing you run a luxury tramline to reach: instead tonnes of woodchips will arrive by truck and boat. (Yeah, that’ll help the environment. Sign the petition here.)

And in fact the plan to run the tramlines down Leith Walk and Constitution Street and along the waterfront has been permanently shelved – it was definitely confirmed in June 2011.

Ewan Spence worked out last year that it would have cost less to cover Princes Street with gold. And that is not even counting the number of businesses that have closed down due to lack of foot traffic and the businesses now appealling for a reduction in the rates due to the damage to their business the tramworks are causing.

In a piece of chutzpah, at the end of January it was claimed the tramworks project was ahead of schedule – according to the revised schedule from September 2011, not the original plan from 2007. The Mound should be open again to buses, taxis, and bikes from 3rd March instead of July, and the Princes Street tramworks are supposed to be done and dusted by June 2012, in time for the Festival. The last time they announced that the tramworks would finish in time for a big street festival was December 2010. We’re still paying for that mistake.

Construction is more than three years late and almost £300million over budget, at more than £830million.

While the West End shops, the concerns of retailers on Princes Street, and Forth Port are getting a lot of attention from Edinburgh Council (all they could spare from privatising core services) not much attention was being given to Leith. Greener Leith reports in November 2011 that there were some plans for redevelopment. The Chair of Greener Leith, Charlotte Encombe, wrote in September 2011:

The fact that there won’t be a tram going to Newhaven, that all this public money spent has not benefited Leith one bit, is a disaster for Leith. Particularly as no one seems to think it necessary to invest into its future and carry out some extremely urgent and essential repairs beyond the paltry £2 million that has been set aside for ‘public realm improvements’.

Because even if Leith Walk gets a quick makeover with a coat of asphalt and a couple of planters, what about the rest of Leith; Constitution Street, Junction Street, the Kirkgate, or even the roundabout at the top of the Walk where there used to be that lovely clock? Will we ever see the Elm Row bronze pigeons again? If the sad reality is that there won’t there be any trams on Leith Walk, is it right that we should also wave goodbye to the prospect of underground bins, replacement trees or pavements and be content instead to ignore the potholes and the proliferation of rubbish bins?

Meanwhile, what are Edinburgh Council doing to make people feel better about the trams project? Why, they’re going to erect a giant ferris wheel in Princes Street Gardens for the summer. In June 2012, Princes Street should be open again, Edinburgh Council will be looking at the Leith Biomass plant’s planning permissions, and we can all ride on a giant wheel.

Work in St Andrew Square is also said to be going to plan and due for completion by Christmas, while council leader Jenny Dawe said she was “now confident” that the full line to York Place will be completed “by 2014 as planned”. (Scotsman, 28th January 2012)

Oh well, if not, she can always retire to Shetland.

Well, Jenny Dawe did have to retire.

But the tram works are still clogging Princes Street.

And the giant ferris wheel isn’t going to happen because they can’t get it into Princes Street Gardens:

The Scotsman has learned a planned access route through a church graveyard at the western end of the gardens has proved too difficult. Concerns about heavy parts transported via a small bridge over the main railway lines out of Waverley Station are thought to have exacerbated the problems, while tramworks have closed off Princes Street.

Network Rail officials had already raised concerns with the council about using the bridge, while the graveyard route was also problematic because of weight limits above tunnels en route to Haymarket station.

2 responses to “Trams? Trams? Look over there – a spaceship!”